Saag paneer—greens cooked with fresh cheese curds in a creamy sauce—has always seemed sort of like Indian Food 101 to me. It's on every Indian-restaurant menu in the US, it's made from ingredients we're familiar with, and, more often than not, it's only mildly spiced. While I've eaten a good deal of more aggressively flavored bowls, and have seen writing about and recipes for versions made in a starker, cream-free way, there's still something pleasantly comforting about the richer, subtler version I grew up eating.

The other wonderful thing about saag paneer is that, in my experience, it's almost universally loved by vegetarians and meat-eaters alike. But what if we wanted to make a completely dairy-free version, so that vegetarians, meat-eaters, and vegans can all enjoy a meal together? I knew there'd be difficulties along the way, but the concept was so appealing that I couldn't turn down the challenge.

I decided to tackle the hardest part of the recipe first: the paneer. Paneer is a fresh cheese that has a uniquely dense, almost rubbery texture and a salty, tangy, umami-heavy flavor. Store-bought vegan cheese substitutes are almost never a great option, so I instead tried out a few different recipes I found online for tofu-based paneer substitutes. The most successful were the ones that combined well-drained extra-firm tofu with a flavorful citrus-based marinade—like this one from Food52—but none of them had that umami flavor or richness I was looking for.

The solution was to add a bit of miso paste and vegetable oil to the mix. Not only did whisking them together along with lemon juice and zest produce a creamy, emulsified marinade, it also helped the tofu cubes brown better when I tossed them in the oven for color. The resulting cubes are delicious when eaten on their own, though not perfectly paneer-like, but I figured: Toss them with a flavorful spinach base, and nobody is going to complain.*

Let's be honest, though—there's always someone who complains. The trick is to remind yourself that you're the one eating the delicious spinach and tofu, not them.

The start of my spinach base was a snap. I've been making saag paneer for years, so I have a technique that I've fine-tuned through trial and error. I start by heating some fat in a saucepan, adding some finely grated or minced garlic, ginger, and chilies as it starts to shimmer. As soon as that garlic and ginger take on a hint of color and let off a sweet aroma, I add some spices. Some recipes go hog wild on the spices, but I like to keep them dialed back just a bit, using only cumin, coriander, turmeric, and a single crushed cardamom pod, all of which I add to the hot fat to bloom and develop their flavor.

Next, in goes the spinach. This is where I thought my recipe could use some tweaking.

I tried a number of different spinach varieties, including baby spinach just for the sake of completeness. (I do not recommend baby spinach for cooking, since it turns mushy; save it for salads.) In the past, I've found that the best variety to use is mature curly spinach, which you can often find in the bagged-greens section of the supermarket. But since I moved out west to the Bay Area, I've rarely seen it, so the best I can do is bunches of flat-leaf spinach or frozen curly spinach.

Neither option is great. Flat-leaf doesn't have the dark green color or flavor of curly, and frozen spinach can be tough (though it'll do in a pinch). So how could I get more flavor into my greens?

As is so often the case, the inimitable Felicity Cloake has done a lot of the backbreaking research work for me. Her articles are a wealth of great links and resources, and they gave me a clue as to how to solve my spinach issues. She points out that saag paneer is actually not necessarily made with spinach. Palak is the word for "spinach," but saag is a more generic word for "greens." This got me thinking: If the spinach I'm getting isn't flavorful enough, why not improve the dish with other, more flavorful greens?

I took a similar approach in my Spinach Manicotti recipe by replacing half the spinach with arugula, and it worked a treat then. It turned out equally fantastic in my saag paneer. I'd recommend a combination of spinach, arugula, and/or mustard greens, though I bet you can make delicious variations with just about any medium-tender green.

Most veganized versions of saag or palak paneer simply use boxed nut milks, like cashew or almond. This works okay, but it never delivers the rich creaminess that I expect in a great saag paneer. It's simply not quite thick enough.

If you were a fan of Top Chef back during season 1, you may remember my pal Harold Dieterle snagging the win in the series by making a version of creamed spinach that he bound with puréed sunchokes. I always loved that idea (and the version he served in his now-shuttered restaurant Perilla), so I decided to see how it would work in my saag paneer. Rather than using sunchokes, which have a very distinct flavor and are available only seasonally, I instead used cauliflower, which I simmered in almond milk until completely tender before blending into a smooth, creamy purée.

Once added to my greens base and folded with the browned tofu cubes, it felt like exactly what the dish needed, adding a wonderful creaminess and rich texture without distracting from the flavor I'd built up with the aromatics and spices. For all you vegans who long for the flavor and texture of creamed spinach, this may be just the answer you're after. 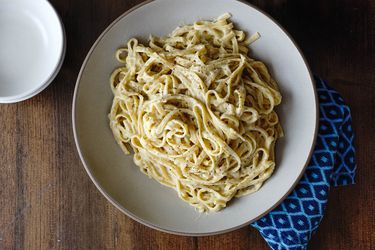 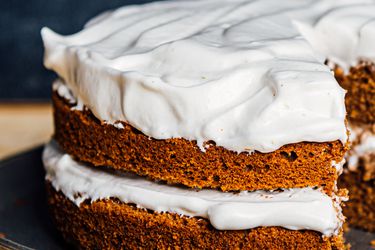 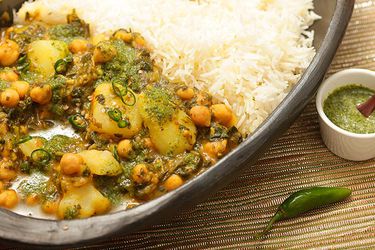 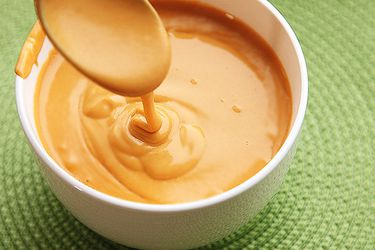 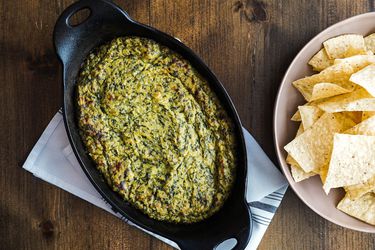 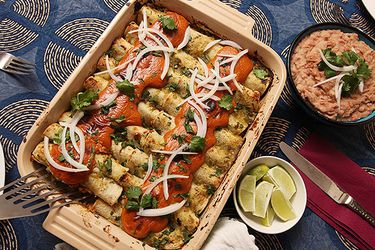