There were a lot of things I did and learned at the band camp* I attended throughout my youth, only some of them related to music, and most of them things I don't care to expand on in mixed company. One thing I can talk about: our cook Glenn's West African groundnut soup. Glenn's version was a thick, peanut-packed broth made with chicken, but recipes for maafe (as it's called in Mali) vary hugely. Some are soupy, some more stewy. Some feature chicken, some cabbage. Maafe can be heavily spiced with turmeric and chilies, or not spiced at all. The only common factor that ties the different versions together is the heavy use of peanuts and peanut butter in the soup base.

OK, it was technically chamber music camp, which, if anything, is even dorkier.

I love it when recipes vary like this and have little agreement on authenticity, as it gives me free rein to fiddle with it as much as I'd like without fear that I'm going to create something unrecognizable. My focus, then, is just on making a dish that's totally delicious, that pulls as much flavor as it can out of its ingredients for results that are rich, satisfying, and, in this case, vegan.

For my aromatic base, I used a combination of garlic, ginger, and Serrano peppers for heat. This is where things started to get just a bit wacky. While grinding up my aromatics, I couldn't help but think: garlic, ginger, and chilies? Seems an awful lot like the beginnings of a good bowl of Thai khao soi! Would some of other Thai flavors work in this soup? I threw a handful of fat cilantro stems (my go-to substitute for the cilantro root that's typically called for) into the pestle and got to grinding.

I knew I was going to eventually blend the soup further and that I wanted some texture in it, so I wasn't too concerned about pounding the aromatics into a completely smooth puree.

I already had mixed a few Thai flavors and techniques into the soup, adding one more couldn't hurt, right? It's not uncommon in maafe recipes to stir a can of coconut milk into the soup as it cooks. Instead of simply adding the milk, I decided to separate the fat and use it to bloom my aromatic paste, which helps develop the paste's flavor.

The final addition? A bunch of kale, because, despite its growing reputation as an overused vegetable, it's still healthy, hearty, great in soups, and most importantly, totally delicious.

The soup is fantastic reheated the next day for a lazy supper, but I strongly suggest that you at least garnish it with some fresh elements to add more texture and flavor—chopped cilantro, sliced scallions, sliced chilies, and lightly crushed toasted peanuts. 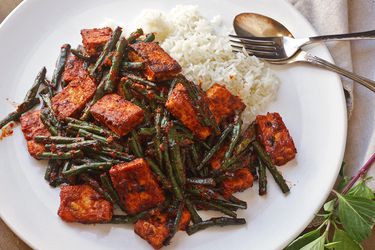