How to Make Chicken Katsu

Given how popular panko-style bread crumbs are these days, even in non-Japanese recipes, there's not really a fundamental difference between katsu and any other style of breaded and fried cutlets. Only two things distinguish it. First, katsu must be made with panko crumbs (as opposed to European-style breaded cutlets, where panko may occasionally be called for but is not a requirement). And second, it must be served with katsu sauce. Katsu simply wouldn't be katsu without a big ol' drizzle of the thick, savory-sweet, Worcestershire-esque stuff.

We have our own homemade version of the sauce that'll kick you in the mouth with flavor, but in all honesty, to me katsu sauce is sort of like ketchup: The homemade version will never beat Heinz. Except, in the case of katsu sauce, the brand is Bull-Dog. The white-capped bottle has been a fixture in my fridge from the time of my very earliest memories, and its flavor is intimately linked to katsu in my mind.

The word "katsu" is gairaigo, the Japanese term for words borrowed from other languages. The simplest phonetic translation of "cutlet" to Japanese vocalizations is katsuretsu, which in turn is shortened to katsu. Add ton—the Sino-Japanese word for "pork"—to the front of that and you've got tonkatsu, or breaded fried pork cutlets (not to be confused with tonkotsu, which is pork-based ramen broth).* Got it? Good. Let's move on to more fun stuff.

*Incidentally, "ramen" is also a word (and dish!) borrowed from the Chinese.

Katsu is most often made using pork, with chicken coming in a close second, though beef or even ham or hamburger is not uncommon in parts of Japan. I typically stick with pork or chicken, or firm tofu or tempeh if I'm in the mood for a non-meaty version.

When using pork, you want cutlets that are nice and fatty so that they stay juicy while cooking. My favorite is pork sirloin cutlets. You could also use pork loin cutlets, from either close to the shoulder (blade chops) or as close to the sirloin as possible. (Chops cut from the back end of the blade are essentially the same as those cut from the front end of the sirloin, where the two sections meet.) Avoid center-cut rib chops, which are better when thick and pan-seared or grilled. So long as it's got good striations of fat and a mix of light and dark meat, it'll work out fine.

Ask for cutlets that are between four and five ounces apiece, and pound them gently to a quarter-inch thickness. The easiest way I've found to do this is to split open the sides of a heavy-duty zipper-lock bag, place the cutlet inside, and gently pound it with a meat mallet or the bottom of a heavy skillet. Mindless bludgeoning can lead to torn meat and holes: You want to use firm but gentle pressure, working at the uneven spots.

With chicken, either breasts or thighs will do just fine, though they need to be treated a little differently. Boneless, skinless chicken thighs can be treated very much like pork cutlets: Just pound them inside a zipper-lock bag.

Whole chicken breast halves are too big (especially considering the massive chickens you find at the supermarket these days), so the first step is to split them into cutlets. It's easy to do—if you've never done it before, just follow this step-by-step guide or the video above. Once split, they can be pounded just like pork or chicken thighs.

The other problem with chicken breast is that it's lean and prone to drying out.

I know from extensive testing that both turkey and chicken can benefit from a wet or dry brine. Treating the meat, either by soaking it in a saltwater solution (wet-brining) or by salting it and letting it rest for a few hours (dry-brining), will cause its protein structure to break down a little bit, which in turn prevents it from squeezing out as much moisture when cooked.

I've found brining to be effective with Southern-style fried chicken, and it turned out to be no different with Japanese-style chicken katsu. Take a quick look:

The chicken on the left was salted and rested for several hours before breading and frying, while the chicken on the right was salted, breaded, and fried immediately. You can clearly see that the salted chicken came out with a plumper, juicier texture. Was the non-brined chicken bad? No, not by any means. But if you're in a rush, I'd strongly suggest using chicken thighs or fattier pork cutlets, both of which are less prone to drying out than chicken breast. If using breasts, I'd salt them and let them rest for a minimum of three to four hours.

Cutlets are made using the classic breading technique of dredging in flour, dipping in egg, and coating with bread crumbs. The easiest way to do this is to place flour, beaten eggs, and panko in three shallow bowls, pie plates, or rimmed plates. Working with one cutlet at a time, transfer it to the flour with one hand (designate this the "dry" hand) and turn to coat, then pick it up with the same hand and transfer to the egg plate. Using your other hand (the "wet" hand), turn it to coat in the egg, lift, let the excess drain off, and transfer to the bread crumbs. Using your dry hand, lift bread crumbs and scoop them on top of the cutlet, then press down so they adhere. Once it's thoroughly coated, you can safely lift the cutlet with your dry hand, flip, and continue pressing crumbs into it until a thick layer is built up all over.

Transfer the breaded cutlet to a plate, and repeat with the remaining ones.

One thing I'd always wondered about: Why do we bother dipping cutlets in flour before we dip them in egg? Surely the egg is gonna stick to a bare chicken cutlet well enough to get a good coating of bread crumbs, isn't it?

I tested it out, cooking two cutlets side by side, one with the standard flour/egg/bread crumb treatment and the other with just egg and bread crumbs. Here's what they looked like:

"Flour is like the primer of the breaded-and-fried-cutlet world."

You can plainly see that the flour does indeed help create a more even coating, which in turn leads to more even browning. If you've ever tried to paint a wall without first laying on a coat of primer, you're familiar with the patchy effect seen in the cutlet on the right. Flour is like the primer of the breaded-and-fried-cutlet world. Flouring also helps produce juicier meat: Because the chicken with no flour had bald patches where the coating was completely stripped away, some of the delicate chicken meat came in direct contact with the hot oil, causing it to turn stringy and dry in spots. Skipping the flour is a tempting shortcut, but it's one that should be avoided.

Frying katsu is very straightforward. The only thing to be concerned about is temperature management. Too cold, and your bread crumbs will take too long to crisp, allowing the meat to overcook. Way too cold, and they'll slough off before they can even set. Too hot, and they'll burn before the meat is done. You want to hit the sweet spot of around 300 to 325°F (150 to 160°C). I heat up about a third of an inch of oil in the bottom of a large cast iron or stainless steel skillet until it hits around 350°F (175°C) on an instant-read thermometer, in order to account for the dip in temperature that occurs when you add the cutlets.

It's important to use a good amount of fat, though the exact type is not super important. Use any neutral-flavored oil with a relatively high smoke point. Canola oil and vegetable oil are fine; peanut oil, shortening, or other highly saturated fats will give you slightly crisper results.

Many recipes recommend flipping only once during cooking, but I found that flipping multiple times actually resulted in more evenly browned cutlets. The key is to let them cook on the first side until the breading is set enough that you can flip without scraping it off. About a minute and a half is good. Then cook on the second side for another minute and a half, and spend the remaining time flipping the cutlets frequently until they're perfectly golden brown.

If you want to be a true perfectionist about it, you can try to stick a thermometer into the meat to gauge its doneness. For chicken breasts or pork, I cook to around 140°F (60°C). For chicken thighs, it's more like 150°F (66°C). But honestly, even if you overcook the meat a little, it's a pretty forgiving preparation, so don't sweat it too much. (It's also not easy to get a reliable reading, given how thin the cutlets are.)

Katsu is typically served with chopsticks, which means you'll need to cut it up in the kitchen before it hits the table. Use a sharp knife to cut the cutlets into thin strips.

Serve the katsu with finely shredded cabbage (an inexpensive mandoline makes short work of that), some lemon wedges, and a good drizzle of katsu sauce. If you want to go full-on Japanese, some steamed white rice with Japanese pickles also makes a great side dish.

It's a cutlet! It's Japanese schnitzel! It's Asian milanese! It's katsu! Call it whatever you want. I call it delicious. 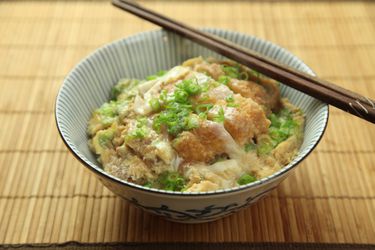 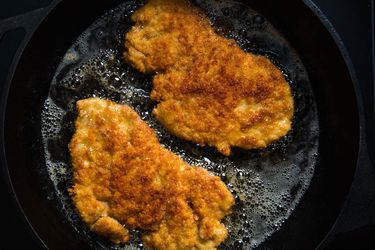 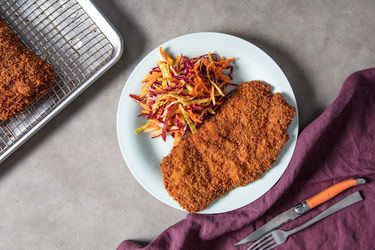 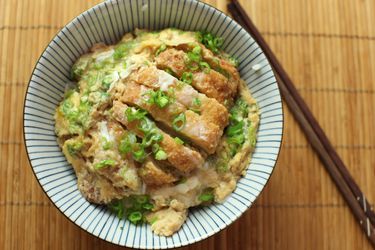 Katsudon: The Best Way to Use Leftover Fried Cutlets 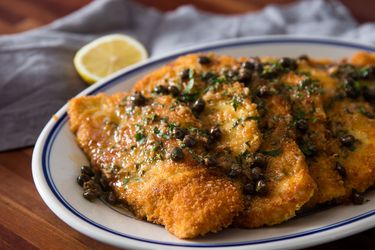 How to Make Chicken Piccata That's Crispy, Buttery, and Bright as Sunshine