The other day I looked at the thermometer outside my New York City kitchen window and it read 105°F. Clearly, I need a new thermometer. And yet, even if it isn't that hot out, it's definitely been getting warm enough that my water consumption is starting to spike while my appetite recedes (well, slightly, anyway). We're entering that time of year when foods need to be satisfying but not gut-busting. If they're refreshing, all the better. And no dish delivers better on all those fronts than the classic wedge salad—a quarter of a head of iceberg lettuce dripping with creamy blue cheese dressing and scattered with crisp bacon, tomatoes, and more.

In addition to its appealing mix of cooling and creamy elements, one of the hallmarks of a wedge salad is its total simplicity—overcomplicating it in an attempt to make a version that stands out from the crowd flies in the face of what this salad should be, which is dead easy. But that doesn't mean that anything goes. There are details that are essential to create a wedge salad that's the celebration of flavor and texture that it should be.

A wedge salad plays with proportion in an interesting way, and failing to notice this can lead to sub-par results. Specifically, what I'm talking about is that huge wedge of iceberg lettuce, a quarter of a head held together at its core. It's not chopped, it's not sliced, it's not separated into individual leaves like almost every other lettuce-y salad. No, this thing's a whopper that requires a knife, just like a big slab of steak does.

"The wedge salad is a mouth party, and all ingredients are invited to each and every bite."

One of the biggest mistakes I see with wedge salads is when people top it with overlarge ornaments. The last thing a wedge salad needs are big chunks of tomato, onion, and bacon precariously balanced on it like hills perched atop mountains; sameness, or even similarity, of scale is a wedge salad's death. No, what we want is maximum contrast. That means all the toppings need to be small, like confetti, so that you're guaranteed to have little bits of every garnish stuck to every forkful of the lettuce. The wedge salad is a mouth party, and all ingredients are invited to each and every bite.

We'll make this fast since the wedge salad is, after all, a simple affair.

Tomato adds flavor, tenderness, and freshness, but it can also be watery and, in far too many cases, bland. We're going to remedy that with salt. By salting the diced tomatoes and letting them sit in a strainer over a bowl, we draw out water through osmosis, concentrating the flavor in each piece while also seasoning it throughout. It's a trick you've probably seen on this site before, including in Kenji's pico de gallo and my migas recipes.

It's worth noting that this adds no extra time to your overall prep: Just dice the tomato first and toss it with the salt before moving on to prep everything else. It'll drain while you work.

I'll be honest: I'm not the biggest fan of raw onion in most salads. It's strong and aggressive, and more often than not I find that it overpowers whatever else is on the plate. Still, a little bit of that pungency, if tempered, is a pleasant addition to the wedge. My favorite technique is to quickly pickle the onion in vinegar, which softens its flavor considerably. You also get a couple additional benefits: First, you get a needed bright and tangy note in the salad, thanks to the vinegar, which helps balance some of the richness of the blue cheese dressing; second, it turns red onion an intense pink color, which makes the finished dish look so much more festive.

For you raw onion fans, please don't fret. I mince chives and sprinkle them on top too. I find their mild raw green-onion flavor much more pleasant.

Once more, note that pickling the onion doesn't add to your prep time either. Right after salting your tomato, mince your onion and pour your vinegar on top (I use white wine vinegar in the recipe, but it's flexible—you could use red wine, rice, or distilled vinegars too). Then let it stand while you continue to make the rest of the components.

There's not much to say about the bacon except that it's a requisite ingredient and we want it crispity crunchity, which leads me to...

The bacon adds a good deal of crunch to each bite, but I really like to layer the crisp textures here. To do that, I take some fresh bread and pulse it in a food processor to create small crumbs. Then I toast it in the rendered bacon fat until browned and crisp. Not only do we stretch the bacon flavor this way by infusing the bread crumbs with it, but we also get a new crunchy texture, less shattering than the bacon, but with more of a light, airy pop.

The last part is the dressing itself. You could buy blue cheese dressing at the store, but it's so much better to make your own. To start, take some mild, crumbly blue cheese and break it up with a whisk. Then add equal parts mayonnaise, sour cream, and buttermilk.

The buttermilk may seem like one step too far for such a simple salad, but it absolutely makes the dressing, both in terms of the great lactic flavor it adds, and also in how it thins the dressing just enough for it to cascade down the face of the iceberg wedge without clotting and clumping. A tablespoon of fresh lemon juice helps perk the dressing up with just a bit more brightness.

Once that's set, just spoon the dressing onto the lettuce wedges and sprinkle the toppings all over.

You won't so much as break a sweat. 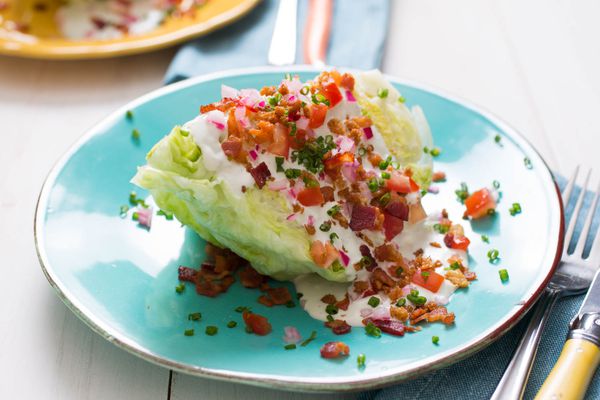 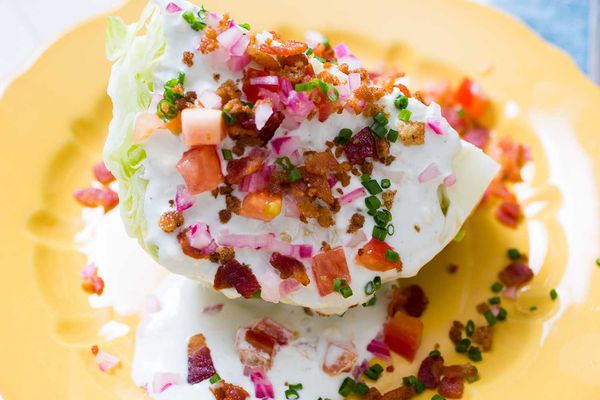 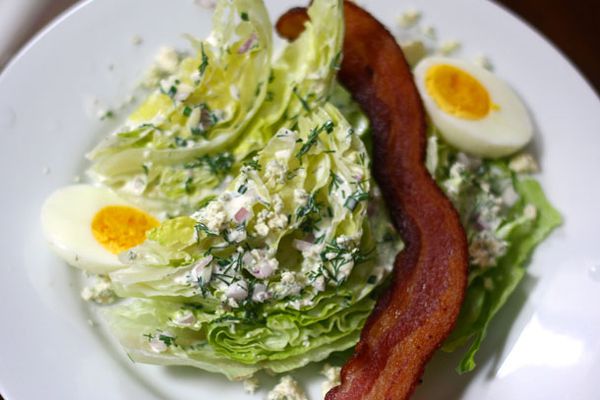