Today, there's no mystery at all. We know that Worcestershire sauce is part of a family of glutamate-rich foods, many of them fermented and aged, that boost the savory flavor of whatever they're added to. Now we frequently reach for these flavor boosters, whether Worcestershire, soy sauce, Parmesan cheese, or fish sauce, to enhance a wide variety of dishes. Oftentimes we're using them in tiny enough quantities that we get a subtle improvement in the overall dish without it being obvious what the source is, such as when we add a splash of Asian fish sauce to Bolognese or French onion soup.

Still, I have a couple of other thoughts beyond the umami booster on how to make better tuna salad—including how to do it without mayo, since I know there's a small faction of incredibly bizarre people out there (my wife included) who for some reason can't stand the stuff. Read on for more of my observations below.

Here's the bad news: If you want a really good mayo-free tuna salad, shelling out for fancy oil-packed tuna can make a much bigger difference. Price alone, though, isn't the best gauge. See, the main problem with canned and jarred tuna is dryness. Most of the meat that comes from tuna is very lean, and the high heat of the canning process can severely dry it out. This is often the case with higher-end tuna as well. Oil-packed fish is usually better than water-packed, since the oil helps coat the dry fish protein and make it seem moister. Even more helpful is to invest in a fattier cut of tuna, most often sold by Spanish companies under the name ventresca, which comes from the much fattier belly (think of the difference between regular lean akami sashimi and fatty toro). I like the ventresca from both Ortiz and Tonnino. Make no mistake, though; this stuff isn't cheap.

As I mentioned above, the quality of the tuna in the classic mayo-dressed version isn't so important, since the mayo more than makes up for whatever deficiencies and dryness the tuna might suffer.

Some folks just don't like mayo. I can't pretend to understand them, but I know they exist, and I respect how frustrating it can be to avoid mayo given how ubiquitous the sauce is, especially in classic American salads like tuna. When I'm going mayo-free, I like to take a Mediterranean approach to the dish, tossing the tuna with a generous amount of good olive oil, briny capers, olives, and vegetables like celery, fennel, and red onion.

Following my discussion above about what kind of tuna to use, this is a case where you really will get the best results with a higher-quality canned or jarred oil-packed tuna, especially ventresca, which is the fattier belly cut. You may wonder whether you can get away with a lesser canned tuna, shredding it as finely as possible, as in the mayo version above, then bathing the whole thing in olive oil to moisten it up. I'd discourage that here, since you'll end up dumping a ton of extra oil into the dish to compensate for the dry tuna, and, unlike mayo, that much oil will become overwhelmingly greasy and heavy. This is a dish for which you're much better off using the moister ventresca tuna and not breaking down the fish into tiny shreds.

Instead, I like to flake the fish with my fingers into roughly half-inch chunks, though there's no need for any kind of exactness here.

Then, because the fish flakes are bigger, I also cut my vegetables bigger, slicing the celery, onion, and fennel into strips. I still rapid-pickle the onion, as above, since the tamed raw-onion flavor and the tartness are both improvements.

For the olives, you can use any pitted briny kind, green or black, cut into quarters. A squeeze of lemon juice adds a little more brightness, while parsley gives it a fresh green flavor.

And finally, once again, I add a dose of umami, in the form of either fish sauce or anchovy.

Here, I go for fully toasted slices of rustic sandwich bread, like a Pullman loaf, which I brush with olive oil to give them a crunchier bite. A little peppery arugula on the sandwich, and it's all set.

Looking back, that Worcestershire trick was one hell of an early lesson in just what a good idea it is to sneak these umami-rich ingredients into...well, just about anything. 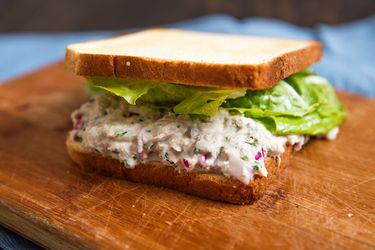 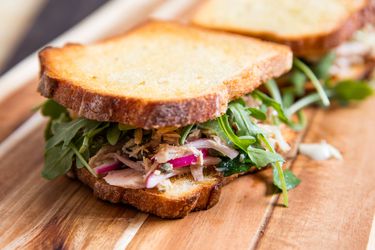 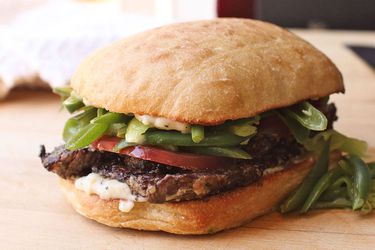 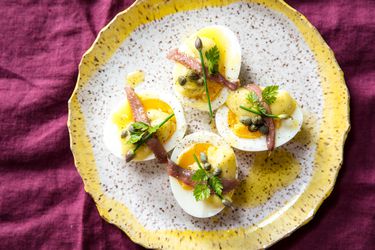