When was the last time a friend invited you over for a potluck, and you thought, I know, I'll bring tacos!

If you're like me, that would be never, because you really don't want to be that person who shows up to the potluck with 10 different containers and asks the host for both a work area to set up all the little dishes of toppings and garnishes, and also half the oven space to warm the tortillas and reheat the fillings. That creates work and chaos for the host. To put it bluntly, that's the a-hole's way of doing a potluck.

Being a good potluck participant is all about arriving gracefully with everything ready, ideally with your contribution in a single dish or container, requiring, at most, limited oven space for reheating (even better: show up with your food already warm).

But tacos are an à la minute food. Sure, you can make some of the components ahead, but the finishing touches and assembly have to happen at the last moment.

Or at least, that's what I thought until my recent trip to Mexico City. One day, walking down the street, I came across a crowd of people eating tacos in front of a cart with a sign that said, Tacos de Canasta.

Canasta, in Spanish, means "basket," and sure enough, as each person placed their order, instead of forming the taco to-order as is generally the case, the taquero reached into a tub and pulled out pre-formed tacos with whichever fillings had been requested. I got in line and ordered my own to see what the fuss was about.

As I ate them, it dawned on me: this is possibly the greatest potluck dish that no one north of the border has ever thought of.

So, What Are These Things?

From what I can tell, canasta tacos are a clever invention of street vendors, many of whom travel by bicycle, allowing them to make the tacos in advance, pack light, and sell the tacos throughout the day without any loss in quality—something that wouldn't work with most other types of tacos.

To prepare the tacos, they start with a basket, plastic tub, or other large container, then line it with cloth, which helps insulate the tacos so that they retain their heat. Next, they add a liner of plastic, such as a trash bag, followed by an un-waxed paper like butcher paper.

Then they prepare the tacos with a variety of fillings like refried beans, mashed potato, cooked sausage, and other meats and layer them in the basket, working quickly to retain the heat. It's common to sprinkle thinly sliced onion on each layer, and also to drizzle oil over the whole thing (I saw one recipe that has you pour a full pot of hot oil into the basket right before sealing it up).

Wrapped up tight, the tacos lightly steam themselves, the tortillas softening while absorbing some of the oil—it's this steaming period that gives canasta tacos their two other common names, tacos al vapor (steamed tacos) and tacos sudados (sweaty tacos). They're very different from fresh-made tacos, but they're delicious.

Making Your Own Canasta Tacos

The first step is finding a basket. The one I used was 9-by-13-by-6-inches, and held about 50 tacos. Even if your basket is larger, though, you can always fill it with fewer tacos or make it smaller by lining it with a thicker layer of cloth; a thick blanket can even work. A too-small basket, on the other hand, will be difficult to work with.

One very important thing, which I learned the hard way, is that all of the fillings need to be on the dry side: refrieds and potatoes, two popular choices, are great because they're not particularly wet. I made a batch by filling some of the tortillas with braised beef, and assumed incorrectly that adding some of the braising juices would make the whole thing tastier. Instead, that moisture softened the tortillas too much and they didn't hold together. You can use braised and other long-cooked meats, but just be sure to drain off all excess liquid.

Then, because canasta tacos will be on the dry side, the solution is to serve them with some delicious salsas, like salsa verde, which should be spooned over them liberally.

The main question is which fillings to use, and really, as long as you heed my advice and don't put anything too wet or juicy in the tortillas, you can kind of go crazy here. I did beef barbacoa and refried beans, but there's no reason you have to stick to those two. Mashed potato with crumbled chorizo would be delicious, for instance, as would our carnitas recipe or this chicken tinga (so long as the excess sauce was drained well). One thing you should stay away from are meats that are best when cooked to lower temperatures, like steak, since nothing good will happen to it when packed away in the basket, steaming in the trapped heat and humidity.

When filling the tortillas, it's important that they be pliable, which means they need to be warmed first. We've written about the best way to do that before: dip the tortillas in water, then heat them in a dry skillet. I didn't use that technique here because it's not practical with such a large number of tortillas. Plus, it's important to fill them quickly so that everything is still hot when we seal up the basket.

So instead, I divided my tortillas into groups of 10, wrapped them very well in foil, and put them in a low 300°F oven for about 30 minutes. Then, as I was making the tacos, I could just pull out one packet of tortillas at a time, rip the foil open, stuff the warmed tortillas, and layer them into the canasta in quick succession. As soon as one packet was done, I'd pull the next one from the oven.

On top of each layer of tacos, I'd scatter some thinly sliced raw white onion, which steams and lightly cooks in the trapped heat once the basket is wrapped up tight.

I also drizzled some hot oil on top of each layer. I looked at a lot of recipes and they all handled this aspect differently: some used plain hot oil, but that's bland; some called for dipping the tortillas in a water-based red salsa then adding oil separately (this seemed fussy to me, and also added extra water in the form of the salsa, which seemed less than ideal given the trouble I'd had with the braising juices).

I settled on an approach that I saw in a video online, which uses a chili oil to add flavor without extra water. To make it, I seared garlic, onion, and dried guajillo chilies in a dry skillet until charred, then added oil and fried them in it.

I transferred this mixture to a blender, added a little fresh oil, and blended it thoroughly.

The chili oil that comes out is incredible stuff, and would be delicious used a thousand different ways (spooned on roasted potatoes is just one quick idea).

Once you've filled up the basket, you wrap the paper up, followed by the plastic bag, and finally the cloth. You want to let those tacos stay in there for about an hour before opening them up so that they steam for a bit*: perfect for a potluck, since the time it takes to transport your offering is actually a crucial step in the preparation!

Because the tacos aren't reheated before serving, it's important to serve them right away after they've rested for 1 hour.

While I've put together a recipe here, I want to encourage you to think about this more as a matter of construction than a specific recipe. You could easily do a much smaller basket with half as many tacos as the 50 I did. Or you could do a massive basket with 300! You could use just one filling for all of them, or five different fillings—there's no reason to feel constrained. Just make as much or as little of each filling as you want, get as many tortillas as you need, and scale the chili oil and salsas up or down as needed.

Here's a quick review of the process:

Set up the basket, first lined with cloth, then with plastic, and finally with un-waxed paper.

Then work quickly to fill the tortillas and layer them in the basket, adding sliced onion and chili oil to each layer.

Then close the basket well by gathering up the paper, sealing the plastic bag shut, and folding the cloth on top.

After an hour or so, open the basket to reveal the finished tacos and enjoy!

19 Cooking Projects to Do When You're Home All Day 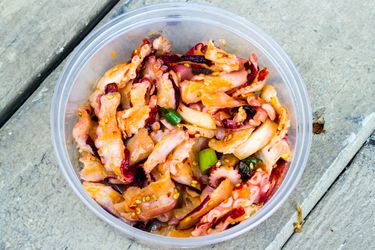