I can't say that my garden has been doing particularly well this summer. I think it may take another season, and perhaps a new raised bed, to achieve "successful" status, but I've been getting my fair share of eggplant, tomatoes, and basil. My neighbor down the street has a much more successful setup—so successful that she's been slipping the odd vegetable onto our counter when she comes over for dinner parties. A couple of weeks ago, we found some zucchini hidden among her weekly delivery of tomatoes. This is unusual, but not unheard of.

With a pile of eggplant, summer squash, zucchini, tomatoes, and basil in my vegetable bowl, I decided to pack them all together into a lasagna. Why I felt like making lasagna during the summer, with days reaching nearly 100°F, I can't tell you, but when that lasagna itch strikes, you've just got to scratch it.

The problem with a summer vegetable lasagna is twofold. First off, summer is not always the best time for a heavy casserole, and lasagnas, with their layers of extra cheese (whether it's grated cheese, ricotta, or Parmesan-spiked besciamella), are anything but light. The second and more pressing issue is that most summer vegetables are simply too watery to work well in a casserole. You end up with noodles floating in a puddle of bland zucchini juice, with a watered-down sauce and limp, squishy disks of eggplant hidden between layers of waterlogged noodles.

To make this summer vegetable lasagna work, I would have to make a few changes to my standard lasagna technique.

Summer squash, zucchini, and eggplant are all around 70% water by weight. That's a lot of water to deal with! Thankfully, Daniel faced and tackled this very issue while working on his recipe for a summer vegetable tian, a dish made from disks of summer vegetables layered into a casserole and baked with a light tomato sauce.

His solution? Sear the vegetables before packing them into the casserole.

Cooking the vegetables in hot oil not only drives off excess moisture, which in turn intensifies flavor by concentrating it, but also adds sweetness and complexity through browning. It adds a few minutes to your total cook time, but lasagna is never a casual affair.

I followed Daniel's exact method, slicing my vegetables between one-eighth and one-quarter of an inch thick, cooking them in hot olive oil, then letting them cool and drain on a baking sheet before stacking them up for later assembly.

But even when the vegetables were cooked, their flavor was still overwhelmed by the amount of cheese you'd find in a typical lasagna. I solved this by using a very high proportion of vegetables between lasagna layers, and reducing the dairy to just a drizzle of besciamella between each layer and a scattering of mozzarella cubes on the very top of the casserole. To amp up the flavor, I also added a small grating of Parmigiano-Reggiano to the white sauce.

I've long ago given up on using those thick, frilly-edged, boil-before-assembly lasagna noodles. They come out waterlogged and mushy no matter what you do, and they're a hassle, too. Much easier is to simply use flat no-boil sheets. The box instructs you to put them into your lasagna dry, but I find it very difficult to gauge how much moisture they're going to absorb that way. You inevitably end up overcompensating and adding too much sauce, leading to a watery and loose lasagna.

Instead, I use a trick I learned while at Cook's Illustrated: Soak the no-boil noodles in tap water for about 20 minutes before drying them on towels and layering them into the baking dish. That way they absorb liquid, and you can get a much better sense of the final texture of your lasagna as you assemble it.

The only remaining major ingredient was the tomato sauce. My neighbor has an overabundance of tomatoes right now, which I've been straining and jarring as simple tomato coulis—basically the homemade equivalent of crushed tomatoes from the supermarket. To keep things extra fresh and light, all I did to make my sauce was season the coulis with salt and use it as is. After that, a scattering of basil leaves and a drizzle of extra-virgin olive oil over the top of the dish before baking was all it needed.

Like I said, lasagna is never truly light. But this version, packed with vegetables and a barely cooked sauce, is about as fresh and summery as it's ever going to get. 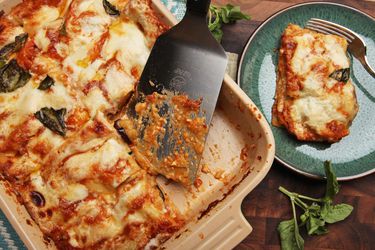 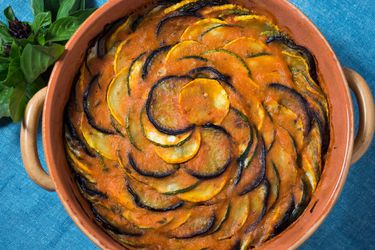 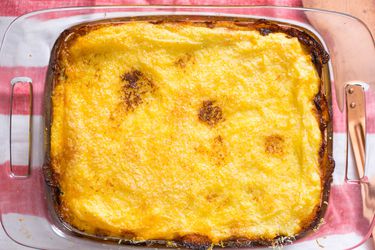