Stella Parks
Editor Emeritus
Stella Parks is a CIA-trained baking nerd and pastry wizard, dubbed one of America's Best New Pastry Chefs by Food & Wine. She was the pastry editor at Serious Eats from 2016 to 2019.
Learn about Serious Eats' Editorial Process
1:02

How to Make Super-Thick and Fruity Whipped Cream

You may have noticed by now that I publish a lot of recipes for whipped cream. In part, that's because there's no simpler (or classier) way to dress up a dessert. But, to be totally frank: I just love whipped cream. It's a welcome dose of silky richness atop everything from slices of cherry pie to ice cream sundaes.

You can spike it with vanilla, infuse it with cherry pits, or even whip it with lemon syrup, but, unless you get heavy-handed with some sort of extract, it's typically a subtle thing, pale and mild. A grace note, nonessential to the whole.

But that doesn't have to be the case! With a handful of freeze-dried fruit and a food processor, you can make an outrageously vibrant foundation for the most flavorful whipped cream around.

What kind of flavor? Well, that's entirely up to you. The technique works equally well with any sort of freeze-dried fruit (or vegetable), from raspberries, blueberries, and apples to cherries and corn—corn, say, if you wanted to add a savory garnish to your favorite soup. While you could use a mortar and pestle to pulverize the freeze-dried fruit, part of the reason I favor a food processor is that it turns this sort of recipe into a one-bowl affair.

Compared to a balloon whisk (whether handheld or attached to an electric mixer), the blades of a food processor are absolutely terrible at aerating the cream, but in the right context, that's actually a very good thing. Working less air into the cream allows it to churn up far more dense and thick, almost like an eggless gelato.

This creates a much more stable foam than one that's airy and light, all the more so with the addition of freeze-dried fruit. Since the fruit's natural water content is almost entirely removed, it grinds into a powerfully hygroscopic powder that soaks up the water that would otherwise seep out of the whipped cream over time. This, in turn, extends the whipped cream's shelf life. And, because the fruit is dehydrated, it also delivers an incredible dose of undiluted flavor and color to the cream.

Of course, it takes a bit of vigilance to make whipped cream in a food processor without turning it into butter, but the technique is more about patience than skill. Go slow, and you'll be rewarded with whipped cream that's stable enough to survive outside of the fridge for a few hours if you head out for a picnic, and dense enough to use as a frosting for layer cakes without fear of collapse. In fact, I picked up the technique in a Japanese bakery where food-pro creamu (cheffy Japanese lingo for "food processor cream") was the go-to frosting for birthday cakes.

My local supermarket carries small pouches from Karen's Naturals (né Just Tomatoes, a company that makes a full line of freeze-dried fruits), while stores like Whole Foods and Trader Joe's carry their own house brands, all of which are lovely. But if you're likely to revisit the technique, or find other recipes to help polish off the leftover fruit, you can save a lot of money buying in bulk online. My favorite brand is Mother Earth fruit, which comes in a plastic tub with a tight-fitting lid to protect it from humidity. 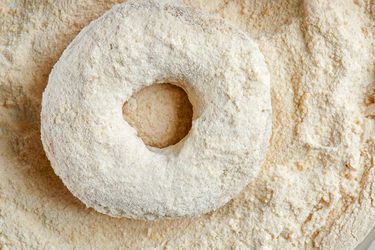 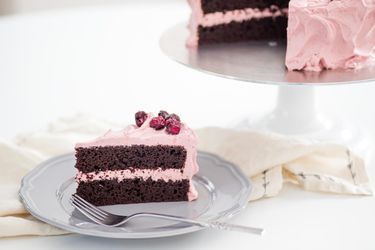 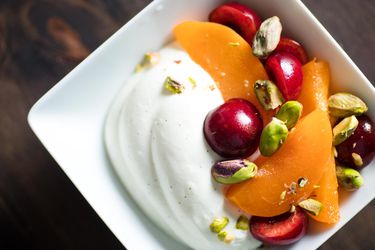