When time is of the essence, this fast and simple combination of little more than egg whites and sugar is one of the easiest frostings around.

The ratio of ingredients in any Swiss meringue will vary from baker to baker, and purpose to purpose, as the amount of sugar affects not only sweetness but stability and volume. The amount of sugar and egg whites I'll use for Swiss buttercream differs from the ratios I lean on for pie, and that same variation is found within the microcosm of seven minute frosting as well.

Classic recipes call for sugar and egg whites in proportions ranging from 2:1 all the way to 5:1 by weight, and it's these high sugar recipes that are the norm. Yet the meringue itself becomes increasingly fluffy and light as the amount of sugar falls, but this lightness comes at the cost of stability, as it's sugar that keeps the moisture of the egg whites in check, and the meringue aloft.

In my extensive testing on the behaviors of Swiss meringue I found that relatively low proportions of sugar to egg whites (2:1 or less) can be quite stable when cooked to temperatures well above the 140°F generally called for in most recipes.

The exact ratios I use vary depending on the application, and that variation in turn affects the ideal cooking temperature of the meringue, as sugar raises the coagulation point of egg whites. For a seven-minute frosting, I've found that 2 parts sugar to 1 part egg white, cooked to 175°F, hits the sweet spot (or the not too sweet spot) of volume and stability, giving me a thick and creamy meringue that won't crust over in time.

You can also change the flavor of seven-minute frosting by using different types of sugar—with brown sugar it becomes sea foam frosting (without question, the loveliest name of any dessert). Beyond that, any type of raw sugar can be used as well (for more info, see our guide to raw and semi-refined sugar). My personal favorite is lightly toasted sugar, which serves primarily to round out the sweetness of the frosting, but darker styles work equally well if you'd like some stronger caramel notes.

In any event, the cooking stage shouldn't take longer than ten to twelve minutes; this time range doesn't quite have the same snappy phrasing and timing suggested by the recipe's name. Just as Prometheus brought fire to change the world, the knobs on our stove give us dominion over heat, putting us in control of the entire process. When a thing cooks too slowly, we can increase the heat, and thereby speed up the process. 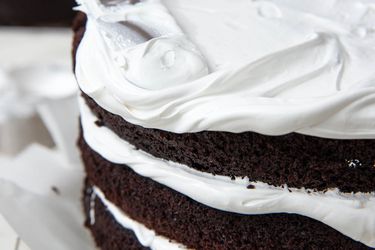