One of the funnier things about Italian cuisine is that some of its most defining ingredients aren't Italian at all. Before Europeans made their way to the Americas in the late 15th century and eventually returned with seeds, the Italians had never laid eyes on tomatoes, corn, peppers, or potatoes. If you'd visited Italy prior to that, you'd have discovered a land with no tomatoes to turn into sauce or Caprese salad, no red pepper flakes for adding heat, no hot peppers to stuff and pack in oil, no bell peppers for stewing into a peperonata, no corn for polenta, and no potatoes for gnocchi.

Don't get me wrong: you would have found polenta and gnocchi, they just wouldn't have been made from corn and potatoes. Before corn, polenta was a gruel made of other grains like barley. Gnocchi, too, were made from other ingredients—after all, they're just the Italian version of the starchy boiled dumplings common throughout Europe (and possibly originating in the Middle East). One of the most famous examples of pre-potato gnocchi are the ones known as gnocchi alla Romana (Roman gnocchi), which are made from a rich and custardy semolina dough.

While they're famous in Rome today, there's debate about their origins. Their reliance on eggs and butter have led some to speculate that they hail from farther north, possibly Piedmont, where butter and eggs are more liberally used. Others have suggested that "alla Romana" is a misspelling of "alla Romena" (i.e., Romanian-style), which would suggest that their origin was Romanian. Either way, one thing that's clear is that this recipe, or some version of it, predates the potato-based gnocchi most of us think of when we hear the word.

Aside from being flat-out delicious, one of the best things about gnocchi alla Romana is how easy they are to make. Unlike potato gnocchi, there's no risk of them becoming gluey or leaden. They are heavy, but only in the best, rib-sticking way.

To start off, you first bring milk to a simmer, then shower in the semolina, whisking as you go to avoid lumps.

The mixture quickly thickens, becoming increasingly difficult to whisk, and can puff and spit as steam builds inside, only escaping when enough pressure has built to force its way to the surface. Lower the heat and stir continuously to avoid being splattered.

Then you keep cooking the semolina porridge, stirring with all the elbow grease you've got. The mass will become elastic and begin to pull cleanly away from the sides of the pot somewhere around the 10- to 15-minute mark.

That means it's time to remove the pot from heat. The next step is to enrich the semolina with butter, egg yolks, and cheese. I start by stirring in butter until melted and fully incorporated.

Next, I add a generous amount of grated Parmigiano-Reggiano.

Finally, I stir in egg yolks.

I save them for last to ensure that the semolina dough has cooled just enough to avoid scrambling the egg (it still needs to be hot though, or it will be too difficult to stir).

Then I turn the dough out onto a buttered baking sheet and spread it out in an even 1/2 inch thick layer, wetting whatever tool I'm using (clean hands and a stiff spatula both work well). The dough may or may not perfectly fill the baking sheet, but that's fine: it's thick enough that it won't spread on its own.

I press plastic against the surface to keep it moist and chill the gnocchi dough until set. That takes about 30 to 40 minutes, but you can also do this all a day ahead and keep the baking sheet in the refrigerator overnight.

I use a round 3-inch cutter to punch out circles of the semolina dough (a glass or even a cookie cutter with another shape will work), but, frankly, you can cut these to any size you want. Once again, it helps to wet the tools to prevent the dough from sticking to them. I like to save the scraps; some folks deep fry them for a snack that's crisp on the outside and molten within, but I also like to use them to make a mini version of this dish. The scraps aren't uniform like the circles, but they cook up just the same.

To finish the gnocchi, transfer them to a greased baking dish or oven-safe skillet; arranging them in a slightly overlapping pattern is a nice touch.

Then drizzle melted butter all over and coat them in even more grated Parmesan.

Bake the gnocchi in a very hot oven until browned in spots (you can also bake them first and then give them a quick finish under the broiler for even more browning).

When you serve them, perhaps a dinner guest will say with mild surprise, "No potato? I've never heard of this kind of gnocchi."

You can reply, "Oh yeah, these are the OG: the original gnocchi." 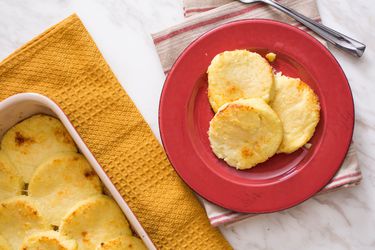