Moreover, the effort-to-reward ratio of uni pasta is off the charts. It's hard to think of a simpler sauce or technique, but the briny, mineral, sweet, intense ocean flavor it delivers is something you'd typically expect to find only in the best restaurants.

I'll get to sourcing it in a moment. As for price, uni is expensive, typically $5 to $10 per ounce. That said, its intense aroma means a little goes a long way; you need only about an ounce of uni per 75-gram serving of pasta. It's not an everyday dish, but it's an easy and impressive first course for a dinner party. Get your friends to bring the fancy Champagne to make up for the sunk costs (and because Champagne and uni pasta go pretty darn well together!).

Once you've decided to make the dish, there are a number of ways you can get from start to finish. I'm going to show you my favorite way, but you should feel free to follow your gut with each of the branching points in the recipe. Like I said, it's really hard to mess this up.

Sea urchins—uni (pronounced "oo-nee") in Japanese—are the little spiny echinoderms that live in cracks and crevices in coastal rocks and reefs. They vary greatly in size and appearance, but when we're talking about eating them, most of the time we're referring to the deep-purple, long-spined Pacific sea urchin from Hokkaido, Japan, or Santa Barbara, California. Or, alternatively, to the short-spined, coral-green Atlantic sea urchin from Maine, which is more common in the Northeast.

Walk into any Japanese fish market, and you'll see neat rows of sea urchin roe sold in little wooden trays. I've very rarely encountered past-its-prime sea urchin roe in these markets, but occasionally you'll find a tray with roe that looks a little muddy or has lost definition in its texture. If you see that, pass it up.

If you don't have a Japanese fish market nearby, you can order it online from Fulton Fish Market or Browne Trading. (Note, though, that it's a seasonal product.)

As I said, sea urchin is pricey stuff, but you don't need much of it. I've found that an ounce to an ounce and a half of urchin roe per serving (four to eight tongues) is ample to infuse the dish with its distinct briny, iodine sweetness. That translates to about one typical tray of uni for a four-serving dinner.

A few years ago, I had pasta ai ricci di mare in Catania, Sicily. That dish was made by sautéing garlic, anchovies, and chili flakes in olive oil; deglazing with wine; adding the sea urchin tongues, whole or lightly broken up (they're so soft and custardy, they'll break down with just a few mashes of a spoon); and immediately tossing it all with pasta and some pasta water.

The result is a dish that reads as a variation on pasta aglio e olio (pasta in a sauce of garlic and olive oil), with the garlic and chilies interspersed with creamy bits of sea urchin and a little acidity from the wine.

It's a truly lovely, classic preparation, but I've been craving more modern versions of the dish: the ones that take some influence from Japan and share more with rich carbonara than they do with aglio e olio. To get that, you need a blender, an immersion blender, or a food processor.

For creamy sea urchin pasta recipes, the typical process is to sauté garlic, shallots, and chilies in olive oil, then add the pasta and pour in a sauce made from raw sea urchin roe blended with softened butter or heavy cream. It's then cooked just long enough for the sauce to heat through and thicken, taking on a rich, glossy sheen.

Both of these basic processes produce decent, simple results, but I found the finished dishes to be a little lacking in brightness. A small squeeze of lemon, added while tossing the pasta at the end, helped a little, but I wondered if there wasn't a better way to build some brightness in from the beginning.

Next, I looked at the butter I was blending with the sea urchin. Butter is notoriously good at dulling bright flavors, and the cream wasn't much better. So I thought, "What if I pick a dairy ingredient with some natural brightness?" I rooted around in my fridge and pulled out some crème fraîche, sour cream, Greek yogurt, buttermilk, and Mexican-style crema.

Greek yogurt and buttermilk both made sauces that looked split and grainy. Sour cream was a little too thick. Crème fraîche worked great, but that Mexican crema—that was the stuff!

The texture of Mexican crema is thinner than that of regular American sour cream, but it also has a more distinct tang to it. It helps that most major brands, like Cacique and Marquez Brothers, contain small amounts of gums and thickeners that allow the crema to retain a creamy, glossy texture even at higher temperatures.

Near me, Mexican crema is available at a number of Latin groceries, Safeway, and Whole Foods. If you can't find it, crème fraîche will do just fine, and if you can't find that either, a mixture of heavy cream and sour cream will get the job done.

Some recipes include umami-boosting ingredients, like anchovies, soy sauce, and miso paste. I didn't find any of them to be necessary, since uni has such a powerful savory flavor on its own, though all made interesting variations.

The only ingredient left to address was the chilies. I tried a number of chili sources, both fresh and dried. Some high-quality red pepper flakes work just fine, but if you want to go for the specialty-ingredient trifecta, pick up a bottle of Tutto Calabria Hot Chili Pepper Spread (available at Italian import stores or online). It's got a mild heat and bright chili flavor, bolstered by the blend of mushrooms and eggplants that makes it into the jar.

That pasta water is the real key. It contains starches that were rinsed off the pasta as it cooked, giving it a wonderful ability to thicken and emulsify sauces without really affecting flavor, and allowing each piece of pasta to pick up just the right amount of sauce.

This method not only cooks the pasta faster—no need to wait for a giant pot to come to a boil—but also produces pasta with perfect texture and super-starchy water that's excellent for emulsifying sauces. (See my pieces on spaghetti cacio e pepe and how to sauce pasta for some more details.)

To complete the dish, I cook bucatini in salted water in a 12-inch skillet, stirring it every once in a while. Meanwhile, I get busy making the base for the sauce, sautéing the shallots, garlic, and chili. Once the pasta is cooked, I use tongs to pick it up out of the skillet and transfer it directly to the pan with the olive oil and aromatics.

I'm linking to a recipe here because, well, some people like really exact instructions, especially if it's the first time they're making a particular dish. That said, I really see this as more of a guideline than a recipe.

Any pasta will do. Wine, sake, or lemon juice will do. If you want to, you can add anchovies and soy sauce. You can keep the sea urchin whole and break it up with a spoon instead of puréeing it, if you prefer. The sauce can take a little less or a little more uni without breaking. You can use Calabrian Hot Spread Sauce, or you can simply use red pepper flakes. 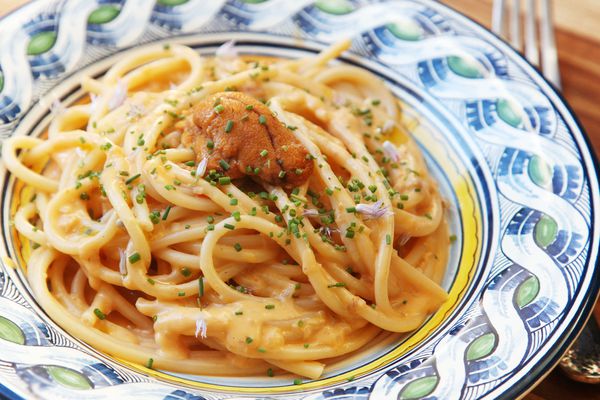 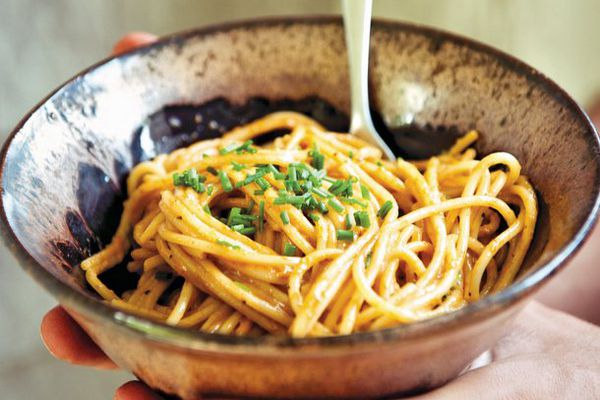 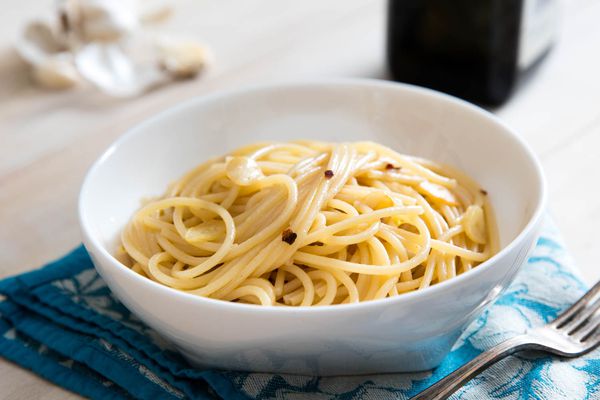 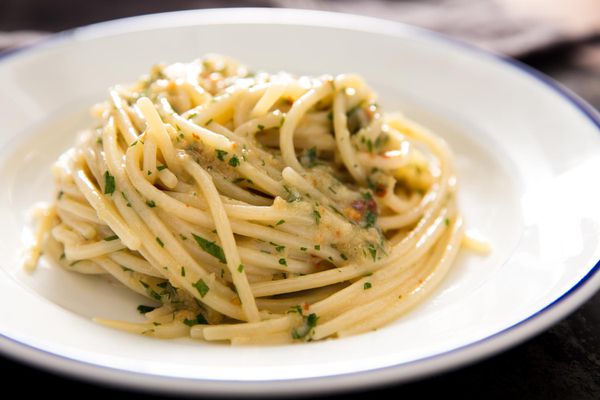 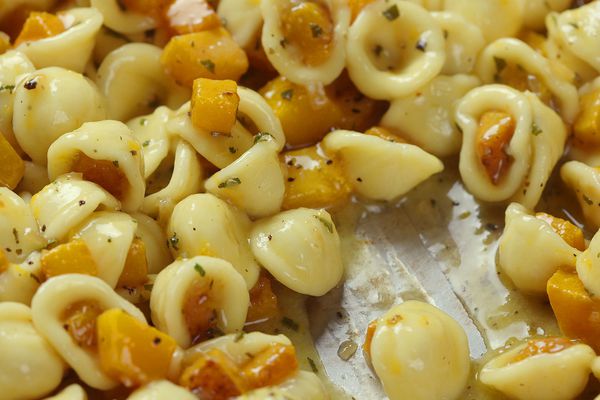