My parents never fed me much junk food. Soda was rarely in the fridge, Golden Grahams were about as sweet as cereal was allowed to get, and meals were homemade from basic ingredients. But there were a few glorious months when my dad was renovating his kitchen and all we could eat were microwave TV dinners—which we did with full authenticity, in front of the TV. I always got a Swanson's Hungry-Man, and my favorite by far was the tray of Salisbury steak.

For those who aren't familiar, Salisbury steak is not a steak at all, and I'm fairly confident it's not from Salisbury, either. If this Wikipedia article is to be believed, it's named after its inventor, Dr. James Salisbury, a Civil War physician who was convinced that a diet high in beef protein would be good for health. Really, though, Salisbury steak is just one of many iterations of a classic Hamburg steak—a steak-shaped patty of seasoned ground meat. In the end, it's not much different from a meatball or meatloaf, except for its shape and the exact ingredients used to make it.

The USDA calls such a steak-shaped creation a "fabricated" steak, and it has standards for what kinds of fabricated steak can be labeled "Salisbury." Specifically, the portion of the mixture that is meat must be mostly beef, but can include up to 25% ground pork. That works for me, because I put pork in mine. Pork, you see, improves the texture of ground-meat mixtures, due to its higher fat content and softer, more tender texture. Beef brings the flavor, though, which is why it's prominent here. Plus, this thing is called a "steak," which is a term we tend to reserve for beef, not pork. (You can read more on the science behind the proportions of beef, pork, and veal in ground-meat mixtures in Kenji's meatloaf article here.)

The USDA also says that the steak mixture can include a small portion of "extenders," which is just another word for fillers, like bread, bread crumbs, soy protein, and the like. Calling something an "extender" or a "filler" implies that you're prioritizing economy over quality—you know, a way to stretch expensive ingredients, like meat, by mixing in cheap ones, like grain. There's truth to that, but it's not the whole story. Fillers can actually improve the texture of ground-meat mixtures, making them juicier and more tender than meat alone would.

The key, though, is to choose the right kind of filler. When I did my testing to make what I think is the greatest meatball on the planet, I found that I vastly preferred meatballs made with a panade—a wet-bread mixture—to ones made with dry bread crumbs. While a bread crumb filler leads to denser, drier meatballs, milk-soaked bread pulp makes them lighter and more tender. So, a panade made from fresh, crustless white sandwich bread is what I use here.

The remaining ingredients in the meat mixture are fairly standard-issue. I add minced onions—raw in this case, since I like the texture they add to the steak. (Plus, there are cooked onions in the pan sauce, so you get the best of both worlds this way.) I also slip in a couple egg yolks, and season the mixture with salt, along with plenty of black pepper, onion powder, and garlic powder, making up the spice profile I most associate with Salisbury steak.

If you want—and this is totally optional—you can add a wee splash of liquid smoke, which approximates the flame-grilled flavor in the TV dinner version of the dish, but I stop short of applying those terrible fake grill marks. I have my limits.

Next is to mix it all thoroughly, which I enjoy doing by hand, but you can pass the work off to a stand mixer with a paddle attachment if you don't want to sink your fingers into raw meat. This is a case in which you want to be sure to mix everything very well, bonding the meat proteins and fats into a more sausage-like mixture. A loose, crumbly hamburger texture is not the aim, since we want the ground meat to seem more like a solid piece of steak. It won't really seem like a solid piece of steak, of course, but, you know, we try.

Finally, ball up the ground meat, form it into oblong patties about three-quarters of an inch thick, and set them on a parchment-lined baking sheet. I like to press dimples into the surface of each one, which prevents the patties from seizing up as they cook. That keeps them flatter and more steak-like, and less like half-inflated meat balloons.

The rest of the dish comes together fairly quickly. I start by searing the patties in a large cast iron skillet until they're browned on both sides. Because these are relatively thick, and because we want to cook them through fully, I begin at higher heat to get the browning going, then lower the heat to avoid burning the exteriors before the heat has penetrated deeply enough to the middles. Remember: You can always crank the heat later if they cook through and still need a little more color, but you can't undo carbonized Salisbury steaks. Done, by the way, means the center of the patty has reached about 145°F (63°C) on an instant-read thermometer.

Once they're browned and cooked through, transfer the patties to a plate, and let them rest. Now it's time for the pan sauce, which, in this case, is a fairly basic brown sauce with mushrooms.

The first step, then, is to toss some sliced cremini or button mushrooms* into the pan, adding oil if they soak up whatever grease is left behind and the pan dries out. (As a rule, you should always add more oil if your pan dries out while you're sautéing, no matter how much oil the recipe calls for.) Cook the mushrooms, stirring and scraping, until they release enough liquid to dissolve all the browned bits left by the steaks on the bottom of the pan, then keep cooking them until that liquid evaporates and they themselves start to brown.

Technically, these are the same mushrooms—just with different-colored caps.

Right when you think the mushrooms are at risk of burning, it's time to add some diced onion, stirring it around until it releases its own juices, once again saving your behind from imminent burnt-ness. That's a big part of cooking, honestly: taking something to the edge of burning (but not burning it), then adding something else to the pan to stop that from happening. Do it in successive waves, as in this recipe, and you end up with layers and layers of deep flavor.

When the onions have softened, their juices have evaporated, and things are once again getting brown, I quickly stir in some ketchup or tomato paste (though I think ketchup's sweetness, acidity, and all-American flavor make it the better choice here). Then it's time to add the liquid to the pan. The obvious choice here is beef stock, but unless yours is homemade or you have access to something of equivalent quality, it's much better to reach for chicken stock. That's because most store-bought beef stock is made with very little actual beef and tends to have piss-poor flavor. Don't do it, really. Chicken stock, whether homemade or store-bought, makes a fine substitute, and all the beefy flavor in the pan from those steaks will enhance it plenty.

Along with the stock, I also add a cornstarch slurry that I make by mixing the starch with a small amount of stock. This prevents the lumps that can sometimes form when you add dry starch to a large amount of liquid.

Why cornstarch here? It's a fair question, since we usually lean on other thickeners, like gelatin (whether naturally present in the stock or added in the form of unflavored gelatin), to increase a sauce's body without affecting its flavor, the way flour and cornstarch can. In response, I point to that original Swanson's TV dinner that introduced me to Salisbury steak. It included a brown gravy with a flavor and texture that made it seem like it was thickened with cornstarch: kind of glossy, and just a hair cloudy. I don't know if that's what Swanson actually used back then, but it tasted like it. To me, that makes it an almost inherent quality of a Salisbury steak gravy. It's similar to the reason why I sometimes like the floury flavor of a roux-based cheese sauce in baked mac and cheese—it just tastes right to me.

After the stock has reduced a bit and the cornstarch is given some time, the liquids will start to thicken up into a proper sauce. To finish it, simply whisk in a little butter for extra richness and flavor and an even silkier texture, along with Worcestershire sauce for deep flavor and a small splash of apple cider vinegar to balance that richness out.

Then just nestle the Salisbury steaks back into the pan sauce, spooning it all over, until they've warmed up a bit. The only question left: What's on TV? 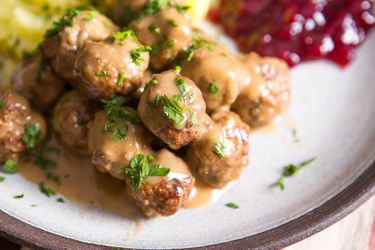