When I was a wee lad growing up in Brooklyn, I'd pluck foot-long oysters from the Gowanus Canal, walk on roads paved with oyster shells, and slurp up iced oysters on the half shell from vendors hawking the city's original street food. Man, was it glorious...if only it were true. A guy can dream, right? Sadly, by the time I came along, the Gowanus was a toxic mess, the streets had been paved over with asphalt, and the oyster carts had been replaced by hot dog and pretzel sellers.

The heyday of the oyster, though, is an important era to remember. It can be hard to imagine now, but before pollution and overfishing put an end to most of the region's wild oyster beds, those cold, briny mollusks were one of the most plentiful foods available on the Eastern Seaboard and the Gulf Coast. They were cheap and nutritious, and they lent themselves to countless preparations. If you've ever been confused as to how oysters ended up in a Thanksgiving stuffing, the answer lies in their former ubiquity. People had oysters coming out of their ears, and they had bread, and they needed to find creative ways to use it all up and make it tasty.

The abundance of oysters—and therefore oyster stuffing—wasn't unique to the Americas. According to this website focused on historic New England cooking, evidence of oyster stuffing can be found in British cookbooks dating to the 17th and 18th centuries. It makes sense that immigrants to North America would continue the tradition upon discovering heaps of oysters in their new homeland.

And so it is that oyster stuffing can be found just about anywhere oysters themselves grow, especially during Thanksgiving. Far from being a Turkey Day anomaly, the dish is practically a logical conclusion. From Northern versions made with wheat bread to Southern ones with cornbread, the nation has long been in consensus about oysters' rightful place in stuffing—even as we've been fiercely divided on whether it should actually be called "dressing."

If you have yet to experience the tradition, perhaps this is the year to start.

Oysters in My Thanksgiving Stuffing? Why in the World Would I Do Something Like That?

Thus far we've discussed the history of adding oysters to stuffings. But historic precedent doesn't automatically equate with deliciousness. In the case of oyster stuffing, though, I'm telling you now that deliciousness is guaranteed.

Adding fresh oysters to stuffing is not unlike adding a splash of fish sauce, anchovies, or miso to a dish to deepen its flavor. That's because, while not fermented or cured like those other ingredients, they're still a rich source of glutamic acid, an amino acid that delivers a payload of savory flavor, along with plenty of briny sea salt.

If you read this site often, you may be familiar with our habit of slipping fish sauce into dishes where you normally wouldn't expect to find it, with the goal of intensifying their flavor—but not their fishiness. For example, Kenji puts fish sauce in his ragù Bolognese, and I add a little to my French onion soup. Whenever we do that, we always include a disclaimer: Don't worry, your food won't taste like fish sauce. Well, in the case of oyster stuffing, I can't quite say the same. You will taste the oysters. Even so, they're really more of a background flavor, and the overall effect is less oyster?!?! and more BOOM, BAM, WOW, YUM.

Okay, So Maybe I'll Consider Trying It. What Do I Need to Know to Make Oyster Stuffing the Right Way?

The main thing to know is that there's very little to know. You literally just add chopped raw oysters and their liquor to the stuffing, then bake it. It couldn't be easier.

As easy as it is, there are still a few things worth pointing out.

The second thing to consider is what kind of oysters to add to your stuffing. There are too many oyster varieties out there to test them all, so I limited myself to a more focused question: Do you need to add fresh shucked oysters, or will canned, pre-shucked raw ones work?

I think this may be the single most important question, since the prospect of shucking fresh oysters, especially when there's so much other cooking to do for Thanksgiving, is likely to scare most folks away. Wouldn't it be great if you didn't actually need to shuck those oysters? Well, good news, because you don't.

I whipped up two batches, one using fresh oysters I shucked myself and the other using oysters from those pop-top cans of pre-shucked ones you get from the fishmonger. Both worked well—there were subtle flavor differences, but I attributed those to the extra-briny flavor of the fresh variety I had bought, versus the milder flavor of the pre-shucked ones. Once they're combined with all the other ingredients in the stuffing and baked, the quality differences aren't noticeable.

Here's one helpful tip, no matter what type of oyster you use: Chopping raw oysters is a messy affair, and you'll lose a lot of their juices to your cutting board. To prevent that, just snip them into little bits in a container using kitchen shears. Then dump the whole thing into your stuffing when you mix it all together.

The last thing to know is that because oysters will add liquid to your stuffing, you'll want to cut back on some of the other liquid in your recipe just a bit. For example, in my recipe, I added two cups of oysters and their liquid to the stuffing, and drew down the amount of chicken stock by one cup to accommodate that extra fluid. If you're using your own stuffing recipe, adjust accordingly.

As for the stuffings themselves, I based my recipes on Kenji's classic sage and sausage white-bread recipe and my Southern-style cornbread dressing, with some minor tweaks. I slightly reduced the amount of sausage in each to give the oysters a little more room to shine, and I took a different aromatic direction, adding diced fennel and minced tarragon to the mix, since I find those anise-y flavors very oyster-friendly. But you can pretty much add oysters to any stuffing you want, whether it's packed with sausage or ham, chestnuts or mushrooms, sage or thyme.

So what are you waiting for? Get shucking! Or don't, and just pop the top on a pre-shucked pint. I'm pretty sure our oyster-stuffed forebears won't hold it against you. 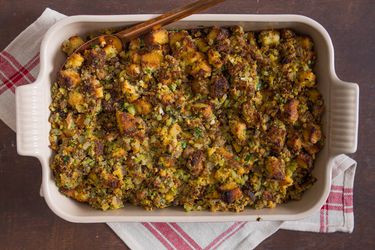