As you know, it's Cheese Week here at Serious Eats. For a dessert-obsessed person like me, that means one thing: cheesecake.

Or, at least, that's where my thought process started. By the time I was done, I had a dessert that you might not initially recognize as cheesecake. For starters, it doesn't look anything like a cake. Instead, I took the classic components of cheesecake—that is, a crust and cheese-based filling—and layered them into individual glasses, technically making what's known as verrines.

Before you start, make sure to use regular cream cheese, not one that's been "whipped" or boasts of being "spreadable," since those have had air incorporated and will throw off the ratios in the recipe.

Each of the three main components of this recipe is easy; you'll get a bunch of mixing bowls dirty, but that's about it.

The crust is a simple mixture of crushed Oreos with some butter, which I pack into the bottom of each glass.

For the layer of Nutella cheesecake, I start by whipping heavy cream with some sugar. Then I beat room-temperature cream cheese (this is important, since cold cream cheese won't cooperate with being whipped) until fluffy, and beat in the Nutella right after that. I fold the whipped cream into the Nutella and cream cheese mixture, and it's all set.

For the chocolate filling, I start by melting chocolate in a double boiler or the microwave and let it cool a bit. Then I whip more cream with sugar and set it aside. Once more I beat some cream cheese until fluffy, then beat in the melted chocolate along with cocoa powder for a stronger chocolate flavor. I fold that with most of the whipped cream.

At this point, I check the texture of my chocolate filling, since it can sometimes have lumps from the chocolate. If it does, I pass it through a fine-mesh strainer to remove them before folding in the rest of the whipped cream.

Some of you may be wondering why I don't just whip one big batch of whipped cream and sugar at once, then divide all of it between the Nutella and chocolate layers. The reason is because they're sweetened to different levels: The chocolate layer needs more sugar than the Nutella layer, given the bitterness of the chocolate in it.

Spoon or pipe the different fillings into your serving cups, cover with plastic wrap, and place in the fridge to set for at least a couple hours. You can eat them once set, but I think the "cheesecakes" are even better after two days in the fridge. 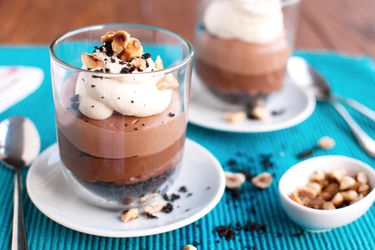 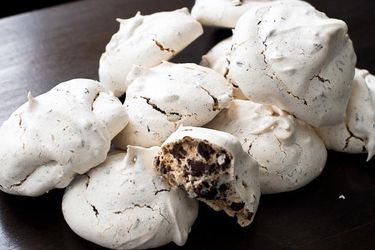