I have some good friends who hate going out to brunch. This has always perplexed me. Brunch at a restaurant gives my dazed morning brain everything it could possibly want—as a customer, that is, because for restaurant staff, brunch is hell on earth. (By "morning," of course, I mean mid-afternoon, since, even at 37, I still sleep like a teenager.) With no more effort than walking a few blocks and sitting down, I can get hot coffee, followed by eggs, sausage or bacon, possibly something with hollandaise, or not. Always eggs, though. Their precise form—scrambled, fried, poached—doesn't matter.

But if, hypothetically speaking, I had to make brunch at home, let's say for family or a small group of friends, I'd most likely make strata, one of the easiest savory brunch dishes I know. It is, in essence, bread pudding without the sugar...though I suppose it's just as accurate to describe it as an eggy stuffing. This one is packed with crumbled pork sausage, mushrooms, asparagus, leeks, and cheese.

It's ideal for brunch not only because it packs everything into a single baking dish, making cooking easy, but also because you can assemble it the night before and then cook it when you wake up. That translates to more time for sleeping in, which is a big plus to me.

The name comes from the fact that, at least originally, the dish was layered: slices of bread shingled in a baking dish, soaked in an egg mixture, studded with savory ingredients, and then baked until set. I've done it that way before, and I don't love how it comes out—the top crusty edges of the bread can stick out and get too dry, while the bread slices' larger size means it's harder to get a good mix of everything in one bite.

Instead, I break from a strict layered construction and use cubed bread instead. The cubes form a more even surface that isn't just crust, and they mix more evenly with everything else. That means more variation in each bite (and no need for a knife).

Aside from that, there's not much to know. The main thing is that, just as with French toast, bread pudding, and stuffing, dry bread is best here, since it can soak up more of the egg mixture. You can use stale bread, but oven-dried bread is even better, since oven-drying removes the bread's moisture without its starch molecules crystallizing into an unpleasantly hard texture. (Starch crystallization, as opposed to simple drying, is what really defines staling.)

I start out by cutting the bread into cubes and throwing it in a low oven to dry out—it doesn't have to be fully dried, like a crisp crouton; just drying the exterior will do.

While the bread is in the oven, I sauté diced leeks and garlic with asparagus in a large skillet until they're slightly softened, then scrape them out and cook sliced cremini mushrooms with crumbled sweet Italian pork sausage until browned.

I fold all of that together in a bowl with the dried bread, diced Gruyère cheese, some parsley and thyme, and a mixture of eggs and milk. I started testing this recipe with the same ratio of egg and milk that I had used in my French toast recipe, but ended by punching up the egg slightly, since I wanted this to taste eggier than your standard French toast.

The mixture should sit for at least an hour, long enough for the bread to absorb some of the liquid. But, as I mentioned above, letting it rest in the fridge overnight comes with the benefit of making your morning cooking dead easy.

I bake the whole thing in a moderate oven until the egg is cooked throughout, which takes a little more than a half hour. To finish it off, I sprinkle grated Gruyère all over the surface of the strata and flash it under the broiler to melt.

Is it as easy as plunking yourself down, pointing to what you want on a menu, and then paying the bill? No. But it's close, and at least at home you won't have to deal with the rest of humanity on a hangover. 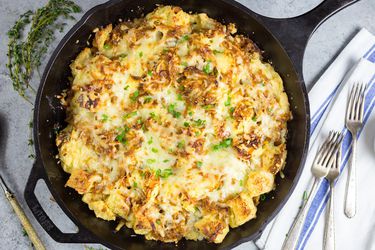 Turn French Onion Soup Into a Strata for an Easy Breakfast, Lunch, or Dinner 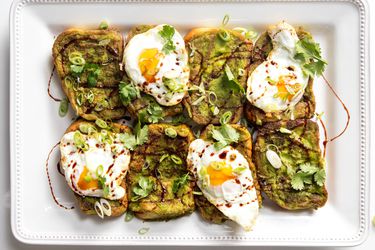 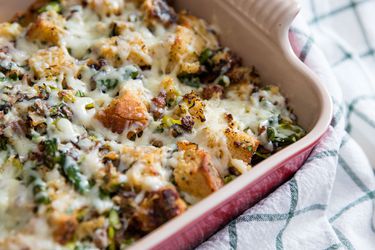 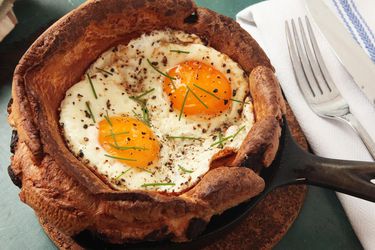 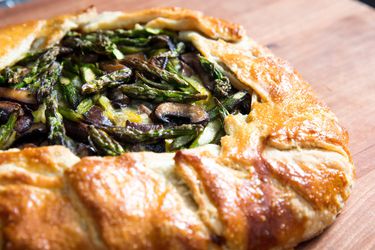