Similar to matzo brei, these matzo pancakes use only two main ingredients and come together in just minutes, for a quick, easy, and delicious breakfast, at Passover or any time.

My grandmother grew up in a household rich with Ashkenazi Jewish cooking, which I would never have known were it not for a surviving document her twin brother, my great-uncle Shush, once wrote to catalog the foods of their youth. I've written about this letter before, in my article on how to make chopped liver, but let's just say that Shush was not a fan of many of those foods, a number of which involved offal.

Of all the dishes their Latvian-immigrant mother made by hand, today I recognize the names of only a few—and gefilte fish is familiar to me not because my great-grandmother's recipe survived through the generations, but because my mom would sometimes buy it in a jar. The failure of traditional foods like miltz (spleen), p'tcha (calf's-foot aspic), and lungen (lungs) to maintain a foothold in my family isn't much of a shock, given how much Shush, and presumably his siblings, hated them.

But there was one dish that he clearly loved—matzo pancakes, which he called pompishkehs.* During Passover, he wrote, "we ate pancakes made of matzo meal sprinkled with powdered sugar...a meal to be classed with the gustatory creations of all time.... Made hotcakes seem like an aberration." The first time I read his letter, my heart leapt at the mention of pancakes made from matzo meal: I know those! They were the one, the only, dish my sister and I begged for when we visited our bubbe, who would cook us a batch in a matter of minutes and serve them with granulated sugar on the side to sprinkle on top.

The closest thing I could find after a quick web search for "pompishkeh" was a Ukrainian fritter called a pampushka, which, being yeasted, wouldn't be kosher for Passover. In Claudia Roden's The Book of Jewish Food, she uses the terms chremslach and bubeleh for these matzo pancakes.

Here, finally, was my cultural inheritance: little ovals of egg and crushed unleavened cracker. Modest indeed, but also inarguably tasty. A meal to be classed with the gustatory creations of all time, as Uncle Shush hailed them? I wouldn't go that far—foie gras, tacos, and sushi would rightly be offended by the notion—but they certainly offer an ease-to-deliciousness ratio that's hard to beat.

Start by smashing matzo into irregular bits and pieces. How small you make them is a matter of personal choice—I like a mix, with some fine bits and some chunky, but you can go very fine, all the way down to the size of matzo meal (the finely ground stuff that's also used to make matzo balls).

Next, soak them in cold water for a minute or two to soften them.

Drain the water, mix in beaten eggs and a pinch of salt, then cook dollops of what I suppose we can call the "batter" in a buttered pan.

The matzo functions like the floury component of a pancake or fritter batter, but because the flour used to make the matzo was already hydrated and cooked when the matzo was made, getting it wet again and binding it with egg is all that needs to be done this second time.

A bonus is that all the warm, toasty notes of the already-baked matzo wind up in the final pancakes, which are then griddled, just like classic pancakes, resulting in layers of browned flavor.

Readers familiar with Jewish foods may recognize these pancakes as a form of matzo brei, an egg-and-matzo creation that takes many shapes and comes in both sweet and savory forms. I'd agree that they are, or at least seem to be, more or less the same thing. The main difference is that matzo pancakes have to be shaped like, well, pancakes, and can be made with either broken matzo, as in my recipe here, or matzo meal. As far as I know, matzo brei would never call for matzo meal, and it can be made more like an egg scramble, or a large, cooked egg-and-matzo mass, or anything in between.

I've been cooking matzo pancakes a lot recently for my son, who's one and a half now. Not only is it one of the easiest breakfasts I can toss together for him, it's also the only unbroken chain of recipe heritage I have to pass on. It's not much, but you wouldn't know it from how enthusiastically he gobbles them up. 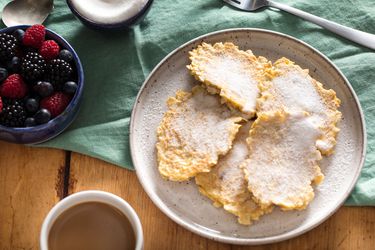