Gaze into my crystal ball and I will reveal your Super Bowl menu. I see...Buffalo chicken wings, a veggie tray with ranch dip, guacamole, nachos, and chili. What do you know, I'm practically the new Miss Cleo.

There's nothing wrong with those game-day classics—they're classics for a reason, after all—but they're all so predictable that they run the risk of being boring. To help you shake things up, I'm offering a spin on one of those Super Bowl standbys: Meet my Korean nachos.

I make them with bulgogi-style steak for protein; caramelized kimchi for sweet, sour, and spicy flavors; gochujang-spiked cheese sauce; and lime sour cream, all of it served on top of fried wonton chips.

The key to good bulgogi is to use a quality cut of beef and a delicious marinade. I typically use ribeye for my bulgogi—the most traditional choice—but you can also use other tender, marbled cuts of beef, such as sirloin. Just make sure that you don't get a lean cut, which would wind up dry and chewy.

I thinly slice my steak, then marinate it in soy sauce, brown sugar, vinegar, sesame oil, onion, garlic, ginger, and Asian pear. The pear is often used in Korean marinades because it contains an enzyme called calpain, which tenderizes the meat while adding sweetness. But if you can't find it, a Bosc pear will do just fine in its place.

Only an hour of marination is necessary to get tender, flavorful bulgogi (marination is mostly a surface treatment anyway), but you can let it sit in the fridge overnight if you like to prep ahead. Any longer, though, and you'll risk mushy steak, as the calpain will eventually over-tenderize the meat.

While I wait for the steak to finish marinating, I make my chips. I cut uncooked wonton wrappers in half, then fry them in batches in my cast iron skillet until they're very lightly golden, which takes less than a minute. I set them aside to drain and cool on paper towels and move on to caramelizing the kimchi.

There are many varieties of kimchi out there, but I make sure to pick up the most common kind, made from cabbage in a reddish, chili pepper–spiked sauce. It's spicy enough to take the place of pickled jalapeños and has the added punch of its fermented, sauerkraut-like flavor. While kimchi is already slightly sweet when raw, caramelizing it in that same cast iron skillet (after pouring off most of the wonton-frying oil) amplifies the sweetness and makes it taste richer, meatier, and more complex. I think of it as the ideal "bit of everything" nacho topping.

After caramelizing the kimchi, I finish the steak. Working once again in that cast iron skillet, I crank up the heat and cook the bulgogi in just a few minutes. To get some good browning and therefore flavor on the steak, it's critical to avoid overcrowding the skillet, since excess moisture lowers the heat of the skillet and prevents the Maillard browning reaction from taking place. Work in batches if necessary.

Once I've got the chips, kimchi, and bulgogi squared away, I move on to the cheese sauce. I use Kenji's cheese sauce recipe as a base, but instead of flavoring it with hot sauce, I stir in a couple of tablespoons of gochujang, a Korean chili paste. As Daniel recommends in his ultimate nacho recipe, it's best to save a bit of shredded cheese to sprinkle on top of the nachos as well. The cheese sauce adds that rich, silky texture, and the melted shredded cheese delivers the cheesiest flavor and stretchy strands when pulled.

Now it's assembly time. To get good coverage, I assemble my Korean nachos in layers: chips, steak, kimchi, cheese sauce, shredded cheddar, then repeat, until all of the ingredients have been piled high into my skillet. Then I move the nachos to the oven to bake until the shredded cheddar has melted.

While I wait, I mix lime juice with the sour cream—which also makes it thin enough to pour over the prepared nachos—and, once the nachos are ready, drizzle it on. The whole thing gets topped off with some extra gochujang, fresh cilantro, chopped scallion, and sesame seeds. If I'm feeling dangerous, I'll throw on some small slices of fresh hot red peppers as well.

Using my psychic powers, I foresee that these will be a hit—such a hit that they'll all be eaten before halftime. But if by some miracle you do end up with leftovers, I will tell you from experience (and prescience) that they taste great when reheated with a fried egg on top. 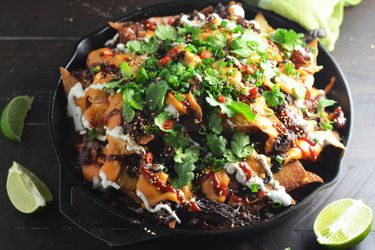 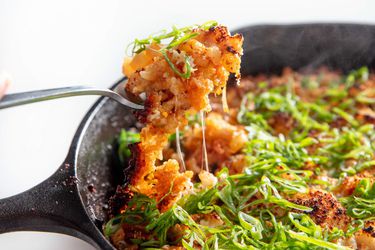 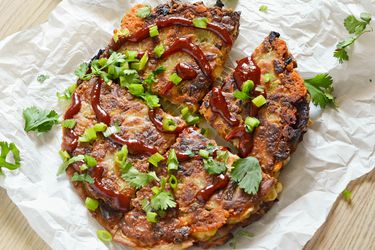