Bored With Ranch? Use Miso, Walnuts, and Pork to Make a Flavorful Veggie Dip

I spent my day today walking through New York in absolute misery as the intense summer heat and humidity coaxed every bit of water out through my skin. Even a visit to the farmers market and all its amazing produce was unpleasant. I didn't feel enticed by what I saw; I was too busy melting into the asphalt. In this heat, if just buying the stuff is a burden, the idea of cooking it in my un-air-conditioned kitchen feels even more unbearable.

That's why I always have one eye open for clever ideas that maximize flavor while minimizing time spent by the stove. I picked up one such idea on a recent trip to Japan. (My travel and lodging were paid for as part of a press trip sponsored by the Tokyo Convention & Visitors Bureau.) One night in Onomichi, a small city in Hiroshima Prefecture, I went to a cool izakaya for dinner. Among a parade of small dishes that were delicious but not particularly home-cook-friendly—crab "butter," made from the tomalley; eel sashimi; shark-cartilage salad—was one that instantly struck me as perfect for home: a wooden box of steamed seasonal vegetables with two miso dips alongside. One dip used dark miso, with ground pork and other seasonings worked into it; the other used light miso with tiny dried shrimp. It was extremely simple, but also booming with flavor, and not the least bit heavy.

I didn't know exactly how they made it, but when I got home, I flipped through several of my Japanese cookbooks and found some clues in Elizabeth Andoh's Washoku. In it, she gives a couple of recipes for miso sauces that she serves as dips. One calls for pine nuts to be crushed and blended into light miso and some dashi; the other calls for walnuts to be reduced to a paste, then blended with a dark miso, along with a little mirin.

With a clearer idea of how to approach the recipe, I set about creating my own, inspired by the dark-miso-and-pork version I ate in Onomichi. I also liked Andoh's idea of adding a nut to the mix, so I decided to work walnuts into mine, too. (For all I know, the version in Japan had some kind of nut in it also.)

To make it, I started by toasting walnuts, then crushing them with a mortar and pestle, though a food processor will work, or even a suribachi—a Japanese ridged mortar—if you have one.

Then I cooked minced onion in a little vegetable oil, followed by ground pork, breaking it up as it cooked until it was lightly browned. When the pork was done, I stirred in the walnuts.

For a final step, I stirred in dark miso along with a splash of mirin (you could also use sake), dashi, and just enough sugar to balance the flavors out, then cooked it all until it had reduced to a thick paste. You can use widely available aka (red) miso, made from soybeans and wheat, or, if you want to try something more interesting, look for mugi (barley) miso or hatcho miso (made from pure soybeans), both available at Japanese groceries.

When miso is blended with nuts, pork, and onion, its salty intensity is reduced just enough. It's still pretty strong, so a little goes a long way, but that's precisely why I like it. You can make a batch—a relatively quick process in and of itself—and then keep it on hand to eat with a big pile of raw or cooked vegetables. (It'll last for about a week in the fridge.)

If only everything I cooked during the summer required such minimal effort and heat, I'd be a happy camper all season long. (I'm lookin' at you, fried chicken.) 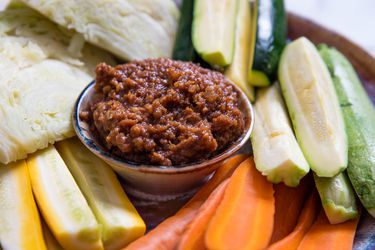 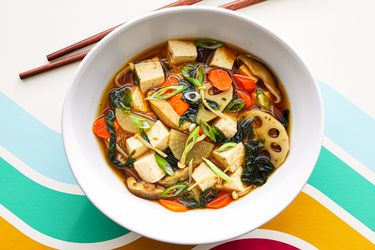