Can drunk food be a thing of beauty? Not to your hungry, blotto eyes, no, that's not what I mean—everything edible looks beautiful to them. I mean, something that's truly a sight to behold. I believe the answer is yes, and I submit to you Exhibit A, Japanese Mentaiko Spaghetti. Just look at that creamy glaze on those perfectly cooked noodles, and that bright dollop of mentaiko, the spicy cured pollack roe for which the dish is named. Appreciate the shreds of nori lightly gracing the mound of pasta, like cloudy wisps clustered at the summit of Mount Fuji on a brisk winter day.*

*What do you mean, am I drunk? Can't I wax poetic from time to time? Also, pass me a beer.

What makes mentaiko spaghetti drunk food is the same as for all other drunk foods: It's available at late-night spots, and it does an admirable job of satisfying the tongue with salt, filling the belly with carbs, and coating the stomach in a protective sheen of fat. In the case of mentaiko spaghetti, the salt comes from the mentaiko, along with a small splash of soy sauce. The fat comes from butter. There's not much more to the dish than that.

Like all drunk foods, mentaiko spaghetti doesn't have to be a drunk food, any more than pizza, nachos, or fish and chips have to be. One could—and probably should—also enjoy it when sober. But if you're not sober, it's so easy to whip up that you could do it with the room spinning (although, at that point, you might just want to get in bed).

One thing you'll need on hand that you probably don't have already is the mentaiko itself. It's made from whole roe sacs of Alaskan pollack (a member of the cod family), which are cured with salt and spices. Make sure you don't buy tarako, which is salted pollack roe without any of the other seasoning or spices. Some packages of mentaiko will say karashi, which indicates that it's spicy—that's the one you want.

When you're ready to make the pasta, start by dropping your spaghetti into some boiling salted water. Then slice open the lobes of roe and scrape the eggs into a mixing bowl, discarding the skins that held them together. Add melted butter and a splash of soy—I prefer usukuchi (light) soy sauce here, which has a saltier but more delicate flavor and a lighter color, but you can also use regular dark soy.

Some recipes for mentaiko spaghetti call for cream and mayonnaise, but I tested it with both and prefer the butter alone. Mayonnaise, even Japanese Kewpie, makes the dish taste like cold pasta salad, which means automatic disqualification for me. And cream doesn't really add anything—by incorporating some of the starchy pasta water into the pasta (more on that here), you can make an amazingly creamy sauce without using any cream at all.

As soon as the spaghetti is done, just add it to the bowl with the mentaiko mixture and give it a good stir. Then add some of that pasta-cooking water gradually, tossing as you go, until a smooth, emulsified sauce forms. Keep tossing until it just coats the noodles, without any excess liquid pooling below.

You'll notice that the heat cooks the tiny pollack eggs. That's a mixed blessing—it infuses the sauce with the mentaiko flavor, but you lose the lovely little pops of uncooked eggs. The solution is that dollop of mentaiko you see garnishing the finished bowl. The diner can mix that in, at which point the heat will have dissipated enough that the added roe won't cook. The result is the best of both worlds: a flavorful sauce and the endlessly enjoyable sensation of tiny eggs popping between your teeth.

One last note: Don't take that nori garnish for granted. It adds an essential flavor to the dish once mixed in; a deeper, more umami flavor of the ocean. It really completes things.

Please, take the whole thing in first, and pause a moment to wax poetic, before you hit it. 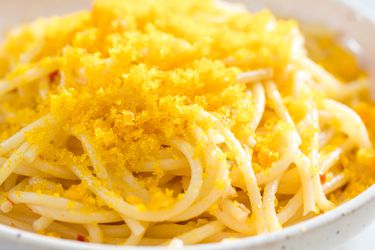 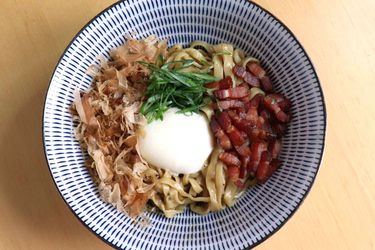