I've set foot on Irish soil just once in my life, and it lasted under an hour. I was flying home from Italy with my girlfriend, Kate, and we had a three-hour layover in Dublin—just long enough to be a drag. After some very quick calculations, we realized we could jump on a bus from the airport to the center of Dublin, spend no more than 30 minutes there, and then race back just barely in time for our flight to New York. "It'd sure beat sitting in this terminal for the next couple of hours," I said. "Let's go grab a Guinness!"

As soon as we stepped off the bus, we made a beeline for the first pub we saw, grabbed a table, ordered two pints of plain along with a plate of stew, and slugged it all down as fast as we could. We were in such a rush, I can't even remember whether it was beef or lamb in the stew, though, to be honest, it was a pretty unmemorable plate of food. One thing I do know is that the sauce was a dark brown color, which means it may have been a Guinness stew and not the lighter-colored and more generically named "Irish" stew—which, at its simplest, is made from little more than mutton, onion, potato, and water.

Guinness stew has, at the very least, the advantage of being slightly more interesting than a stew with nothing but water as its base. But, as I quickly found while testing this recipe, it still doesn't add much. In the world of stouts, Guinness is remarkably light on flavor. Cook it for a couple of hours, and what little bitterness and character it has vanishes into an Irish mist...no whiskey required.

One obvious solution is to make not a Guinness stew but a stout stew, using a bolder ale in place of the classic. I could have gone that route, but decided not to—Guinness is the most widely available stout on the market, and if I designed my recipe around a more flavorful but less common stout, it could create problems for anyone unable to find my chosen brand.

Instead, I decided to fix the flavor issue by amping up Guinness's roasted-coffee and chocolate notes with just that: actual coffee and chocolate. They help preserve the stout's flavor even after the long cooking. Plus, the chocolate has a hint of sweetness, which helps balance the mild bitterness of the beer.

But that's just the start. Read on for all the steps to a flavorful Guinness beef stew.

It's worth noting that using beef isn't a foregone conclusion in a stew like this, because in Ireland, mutton is more likely to be found in the pot. That said, beef versions abound, and, since beef is way more common in the United States than any kind of sheep, young or old, I'm sticking with cow here.

In this stew, I'm calling for a boneless chuck roast, which comes from the shoulder of a cow. It's a tough cut that grows tender as it cooks, its ample collagen-rich connective tissue transforming into moist and soft gelatin. It's also relatively affordable, which is why I described it as the workhorse cut in my guide to beef cuts for stewing—it delivers on texture and flavor without breaking the bank. However, there are some other very tasty options, including bone-in short rib and a less common one called the Bohemian. Check out the guide to learn more about the various cuts best suited to recipes like this one.

Most recipes for beef stew call for cutting the meat into one- to two-inch chunks, browning it on all sides in a pot, and continuing from there. The browning develops deep flavor through a complex transformation of proteins and sugars known as the Maillard reaction, but it also dehydrates the surface of the meat. That's because the Maillard reaction doesn't really get going until temperatures surpass 300°F (150°C), and the meat can't reach those temperatures until the water on the surface—which holds steady at 212°F (100°C) when boiling—has cooked off. Those dehydrated surfaces become irreversibly tough, even after the beef has been stewed for several hours.

That leaves us with a dilemma. We want browning for a deeply flavored stew, but we also want tender meat. The solution that Kenji and I are using in all our beef stew recipes from now on is to start with a whole boneless chuck roast, cut it into about three large steaks, and brown the two biggest sides of each of those steaks. Then we cut the browned meat into big, one-and-a-half- to two-inch cubes. This gives us the best of both worlds: deep browned flavor, but still plenty of tender meat. (For a more in-depth explanation of this, stay tuned for Kenji's upcoming story on his beef-browning tests.)

Then we toss the cubed beef in two tablespoons of flour until it's coated in a light paste. A lot of stew recipes call for a bigger dose of flour to fully thicken the sauce, but this comes at the cost of muddied flavor. Instead, we use just a small amount of flour to assist with the thickening, relying primarily on reduction and gelatin to get us the rest of the way to a rich, silky sauce with a much cleaner flavor. The finished stew won't look like beef chunks coated in a thick gravy, but, then again, this is beef stew, not beef gravy.

With our beef browned and then cut into cubes, the next step is to brown the aromatics. This, too, comes with complications. The easiest route is to brown the diced aromatics, then add the braising liquids and the beef, and stew it all until done. The problem with that approach is that by the time the beef is tender, after about two hours at 275°F (135°C), the vegetables are as soft as pudding and, having given up all their flavor to the stew, about as tasty as water.

The solution is to brown large pieces of aromatic vegetables and simmer them with the stew for flavor. When the stew is almost done, I fish them out and replace them with a fresh batch of diced aromatics. For the best flavor, it helps to brown those diced aromatics, too—at first I'd planned on browning them in the Dutch oven, after the beef and before the large vegetable chunks, but I ultimately decided that it would be more efficient to sauté them in a skillet while the stew was in the oven. Either way works, though.

In this recipe, the particular aromatics I use are yellow onion, carrot, parsnip, and garlic. Some die-hard traditionalists might say that carrots don't belong in a proper Irish stew. That may be, but I'm using them anyway, because they add more flavor to the dish. As for the parsnips, I figured I'd toss them in for their added sweetness, which helps balance the beer's bitterness, just like the chocolate does. After testing, though, I settled on using a very small amount, since parsnips will quickly overpower just about every other flavor in the stew if used in even moderate quantities.

The next step is to add the liquid. I start with some chicken stock, in which I've bloomed several packets of unflavored powdered gelatin. When using store-bought stocks, chicken is a better choice than beef broth, since it has a more natural meaty flavor. The gelatin, meanwhile, helps thicken the stew's liquid without dulling its flavor or making it gloppy the way too much flour can.

The chicken stock goes in with a couple of cans of Guinness, along with a small dose of espresso or strong brewed coffee and a piece of bittersweet chocolate. This is where you want to get a wooden spoon and scrape up every last browned bit from the bottom of the pot, enriching the stew liquid.

For a final touch, I add a tablespoon each of Asian fish sauce, Worcestershire sauce, and soy sauce. Each delivers its own dose of deep, savory flavor, but rest assured, none of them will leave an obvious impact on the taste of the final stew.

The stew is just about ready to go into the oven at this point...but don't forget the beef. In it goes, with its light floury coating. A bouquet garnis, made from sprigs of thyme, parsley, and a bay leaf and tied together with kitchen twine, tops it off.

Then I transfer the whole Dutch oven into a 275°F (135°C) oven, with its lid on but partially open. Cracking the lid allows evaporating moisture to escape at a slow rate, gradually reducing the sauce. Every half hour or so, I open the oven, remove the lid, and give the stew a stir to mix the beef on top deeper into it; beef on the surface continues to brown and develop flavor, but left exposed for too long, it will dry out and become too tough. After an hour, I add small waxy potatoes, like baby Yukon Golds or new potatoes.

While the stew is in the oven, I quickly sauté the diced aromatics in a little oil until lightly browned, and then set them aside.

Once the beef is starting to become tender—between one and a half and two hours later—I pull the stew out of the oven and remove all of the large pieces of aromatic vegetables (discard them, eat them, feed them to your pet—whatever works for you). This is a good time to grab a ladle and skim off some of the rendered fat from the surface of the stew.

I add the sautéed aromatics, then return the stew to the oven, cooking it just long enough for the beef to become fully tender and the potatoes to cook through, which takes about 45 minutes or so. Try not to cook the stew much longer than that—you can overcook the beef in your stew, sending it past tender to tight and dry.

Once it's done, skim off more fat, if you're eating it right away. If not, cool it down, transfer it to the fridge, and remove the fat cap that solidifies on its surface. I recommend serving the stew hot, but not piping-hot: Gelatin thickens as it cools, so the sauce will have the best texture if you let it cool slightly. Plus, you're less likely to burn your mouth.

I suppose it would have been nice to stumble across a stew like this during my rapid-fire visit to Ireland. Then again, I would have had to eat it too fast to notice.

Note: As mentioned in the recipe, the oven temperature of 275°F (135°C) worked for me through dozens of rounds of testing in multiple kitchens and ovens. But based on reader feedback, it has become clear that some home ovens are too unreliable at such a low temperature, leading to greatly prolonged cooking times. To address this, we've increased the oven temperature to 300°F (150°C) in the recipe. 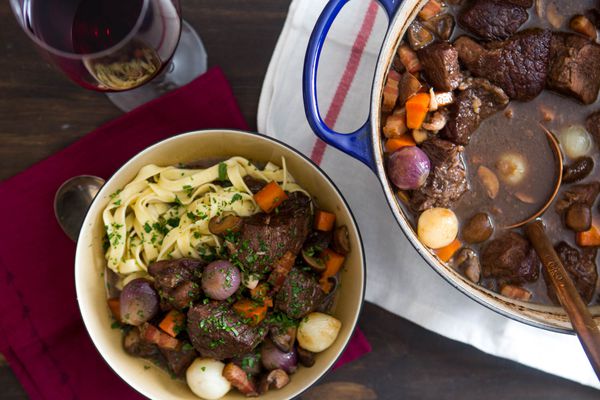 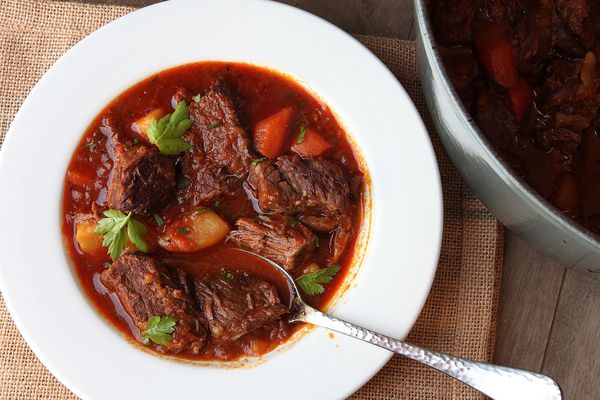 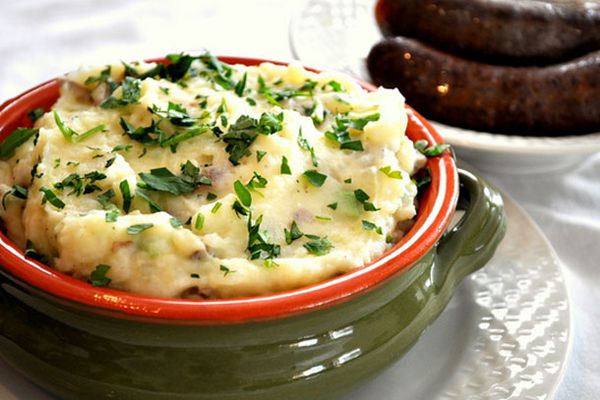 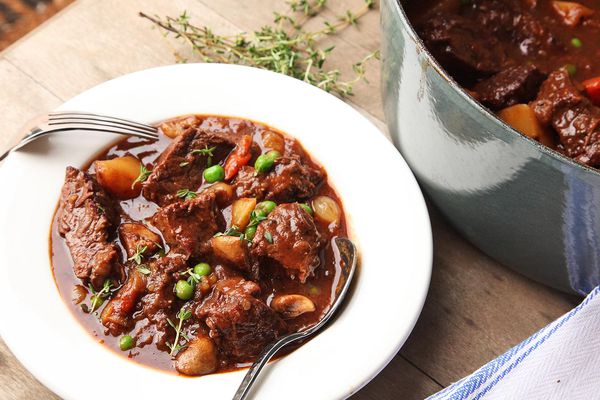 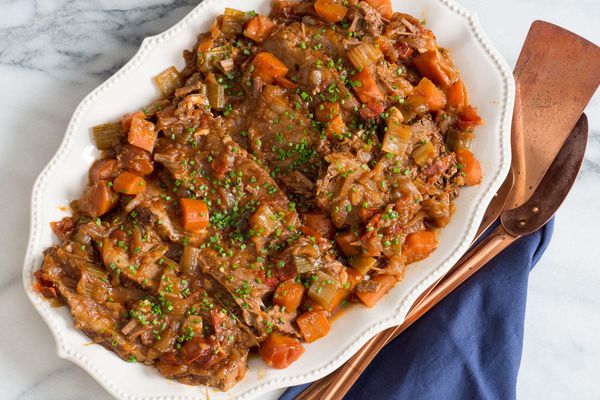