Heat Up Your Homemade Falafel With Harissa and Black Olives

When I first completed my recipe for falafel, my first thought was "That's great—now how do we make it hotter?" That thought was immediately followed by some digging through the refrigerator for condiments, mixing them into batches of my raw falafel dough to see how they'd taste as they fried up. I started with sambal oelek, Chinese hot sauces with fermented fava beans, chili oil, and other hot sauces of varying degrees of consistency and heat.

I settled on harissa, the North African spice paste. It comes in a baffling variety of heat levels and styles, but for falafel, I like the high heat of DEA-brand harissa, which has chilies, garlic, coriander seed, and a good dose of caraway. It's a workmanlike brand that's better for flavoring a recipe than for using as a sauce by itself.

On a whim, I also folded in some chopped Kalamata olives I had hanging around in my fridge without a home. I was a little worried that the falafel mixture might fall apart with all the additions, but it held together perfectly as it fried.

Unadorned, these harissa and black olive falafel balls aren't melt-your-face-off spicy; they've just got a little kick to them. You could go in one of two directions with the condiments here. Either choose a creamy, cooling sauce like tahini, or take the opposite route, reinforcing the spices and heat with a hot sauce like zhug.

You can guess which way I went.

You know the real problem here? I can't think of a catchy jingle that fits the words to my official cooking motto. At least for now, my life will have to remain jingle-free. I'll just have to console myself by burning my face off with spicy foods, in silence. 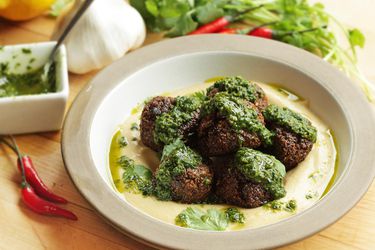 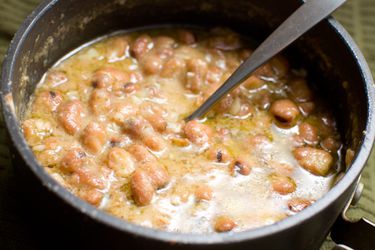 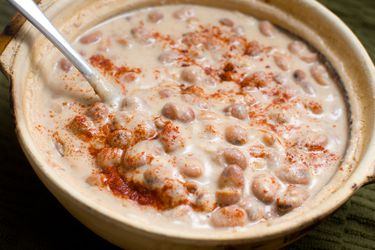 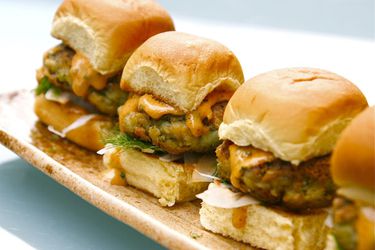 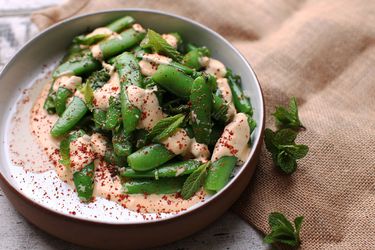 Dress Up Spring Snap Peas With Harissa and Tahini