What would you get if you took the dense, plush texture of Italian gelato, added the creamy body of American ice cream, and served it fresh from the machine like soft serve? You'd have one of the greatest desserts born on American soil: frozen custard.

Frozen custard is what happens when you take extra-rich ice cream and leave out all the air. It's so dense and soft it barely supports its own weight—it's served in ploops, not scoops—or it's whizzed up with chunky mix-ins or hot fudge and served as an extra-thick milkshake called a concrete. Ice cream is for people who like dairy. Custard is for dairy fanatics.

Perhaps that's why, despite its Coney Island heritage, custard really made its name in the Midwest and South. Today you'll find custard shops from Wisconsin to Missouri to Maryland and Virginia, as well as in chains like Kopp's, Culver's, and most recently Shake Shack.

An ice cream this good shouldn't be confined to burger joints and custard shops—but can home cooks make it without any special equipment? As it turns out, yes, and here's a secret: the homemade stuff is just as good, if not better, than what you can buy.

Legally speaking, American ice cream is a churned frozen dairy dessert that's at least 10% butterfat by weight. Custard follows the same rules, but it must also be at least 1.4% egg yolk solids by weight.*

*In case you're wondering, Harold McGee pins an egg yolk at 16% protein solids; the rest is water and fat.

In cookbooks, the terms "ice cream" and "frozen custard" are often used interchangeably because most home ice cream recipes these days call for egg yolks, and it only takes two to three yolks per pint to reach that 1.4% benchmark. So as far as the FDA is concerned, the ice cream you're making at home probably qualifies as frozen custard, assuming you're using eggs.

But the custard you'll find at Kopp's and Shake Shack isn't just extra-eggy ice cream. For one thing, frozen custard has to be eaten fresh—within two hours of being made, when it's at its softest and creamiest. But the biggest difference between ice cream and custard isn't a recipe or serving temperature—it's the machine you use to make it.

Many professional American ice cream machines are designed to beat air into an ice cream base as they chill it down. Churning paddles agitate the mix to keep ice crystals small, and air adds the hallmark lightness of American-style ice cream.

Frozen custard machines, called continuous freezers, work differently. You pour custard base into one side and the machine sends it down a pipe that freezes the custard to soft serve temperatures, then spits it out in one continuous stream. The machine works a little air into the custard, but way less than the fast-and-furious paddles of an ice cream maker. And the custard is ready fast—as soon as two minutes after the base gets poured in. At Shake Shack, the continuous freezer can run for hours, sucking in liquid base and turning it into fresh custard all day long. With high customer demand, the custard is eaten right away, and it never gets a chance to firm up into hard ice cream.

Custard is different from ice cream in three ways: 1) an eggier recipe, 2) a soft serve consistency, and 3) a dense, rich texture with less air than ice cream. We can make eggy ice cream easily enough and the soft serve part isn't much of a problem. But what about that air?

Here's the thing: the ice cream maker in your kitchen works differently from the pro model in an ice cream shop. A pro machine beats air into ice cream like an electric mixer whipping cream—fast and furious. A home machine, which can take 30 minutes to churn a single batch of ice cream, is much slower, and works in much less air, more like stirring a bowl of cream with a wooden spoon. That's why the ice cream you make at home is often more dense than anything you can buy in the store, and that's the difference we can take advantage of as home cooks.

Soft Serve By Any Other Name

For my first try, I wondered if I could I make frozen custard just by churning a normal ice cream recipe and eating it fresh. After all, my go-to vanilla ice cream is pretty eggy, and it's plenty rich, almost 18% butterfat compared to the super-premium 16% mix you'll find at Kopp's.

I churned a batch and served it fresh next to some Shake Shack custard for comparison. Tasters loved, and even preferred, the homemade soft serve, but it wasn't the frozen custard I was after. The Shake Shack version was a little more dense and rich, with an ever-so-slight chewiness reminiscent of hot fudge. That's the elusive custard texture I was trying to achieve.

Another thing I hadn't thought of: frozen custard is served warmer than hard ice cream, and the warmer an ice cream, the more salt and sweetness you taste. All the salt and sugar in my recipe served to heighten the flavors of vanilla and egg, but they did so at the expense of the milk and cream. Custard is all about that honest, simple dairy flavor; my ice cream was actually too flavorful for the job.

How could I get a richer texture in my custard? More fat or eggs isn't the answer—my recipe is already loaded with both, and adding more would only make the ice cream too heavy. Nor could I add in less air—my ice cream maker works on one speed and doesn't allow me to control the air intake.

After eggs and cream, custard's third pillar is sugar, and as I know from making sorbet, different sugars make for different ice cream textures. My favorite widely available alterna-sugar is corn syrup, which I often use in sorbets to achieve an extra-glossy texture that feels more dense and rich on the tongue. A little corn syrup should bring out the slightly fudgy custard feel I was looking for.

Also, pound for pound, corn syrup is less sweet than table sugar. Swapping out some sugar for corn syrup and reducing my recipe's salt content should give me the mellower, more dairy-forward flavor I was looking for.

This time it was dead-on. See how plush and glossy the custard looks when it's nudged with a spoon? That's the corn syrup at work—just a little bit, but enough to make the final product richer, creamier, and ever so slightly chewy, just like the custard you get at Shake Shack, Kopp's, and all the other top custard shops.

I'll put it this way: I worked on this recipe over a series of days, and when I told my lovely colleagues I was done and there'd be No More Fresh Custard, I got more than a few whimpering noises in reply.

There's a downside to making custard at home in lieu of a real custard machine: it doesn't churn quite as cold, so it melts especially quickly. So unless you're planning to eat your custard right out of the churning bowl, I'd recommend transferring it to a container and letting it firm up in the freezer for an hour, ideally in small pint-sized containers. When you remove it, it'll be just firm enough to spoon out but still soft, fresh, and custardy.

As with store-bought custard, you need to eat this stuff fresh, within two hours of making it. So don't make more than you'll serve in one sitting, as anything leftover will harden into plain old ice cream. For two or three people, a pint is all you need; you can always double the recipe and churn in small batches.

And I know you're wondering: can I use this to make concretes? Indeed you can. But since your custard is warmer than what you'd get out of a professional machine, it's best to skip the blender or milkshake machine and add your mix-ins straight to the ice cream maker. For vanilla custard, I like chopped up M&M's. For chocolate custard, heath bars are just the thing, but if you prefer brownies, cookies, chocolate-covered pretzels, or gummy bears, go with what feels right.

What else does your just-as-good-as-the-competition custard need? How about an ersatz burger recipe to make it a full meal? 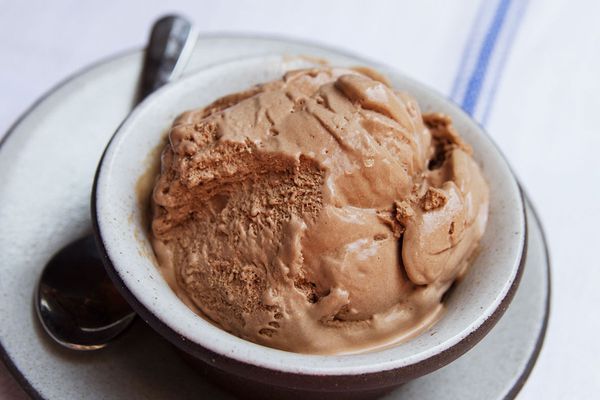 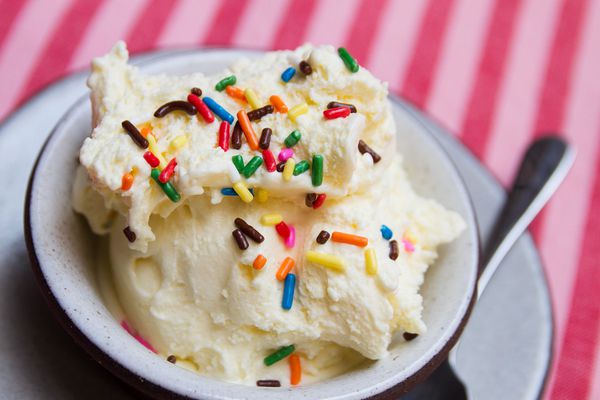 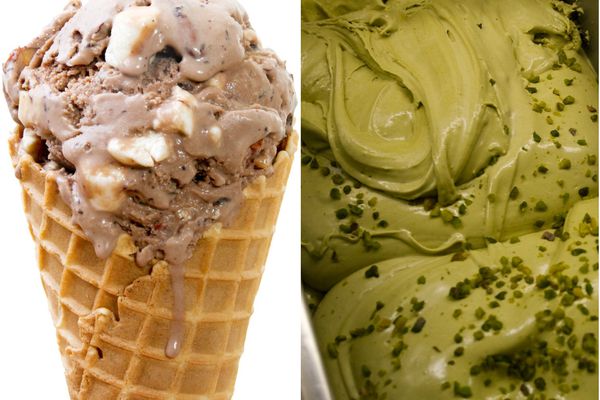 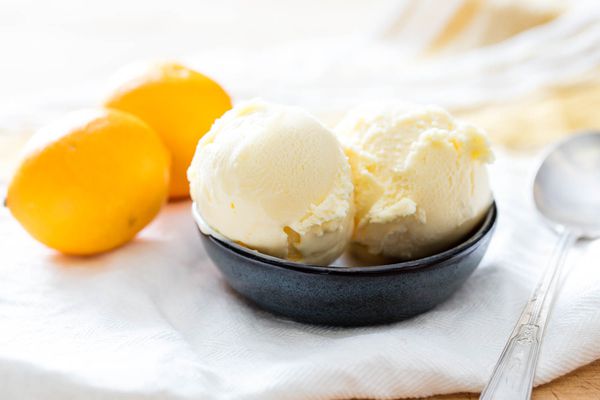 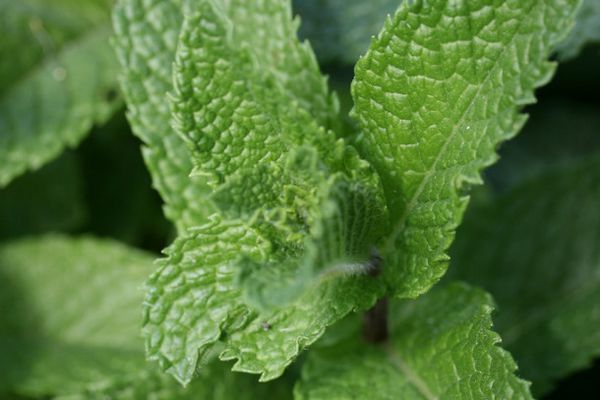 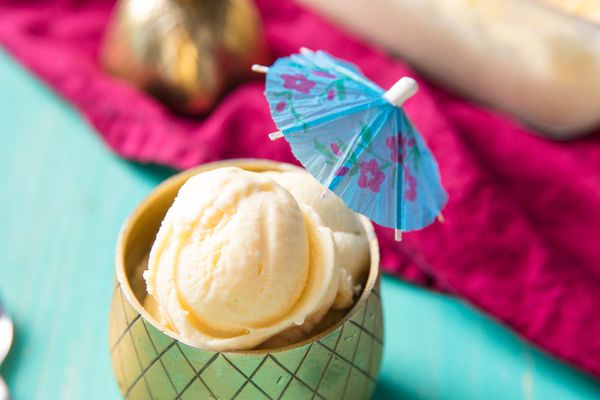 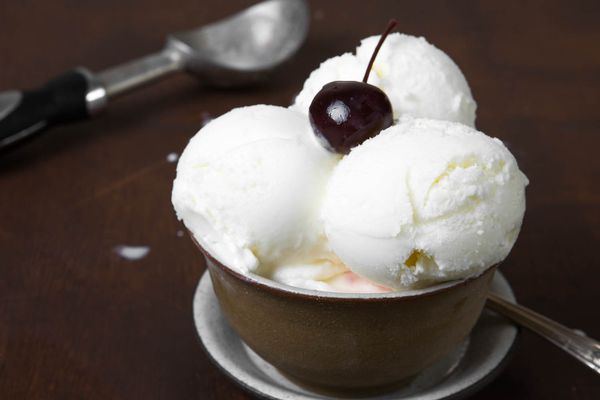