I've been thinking about seafood sandwiches a lot lately, and the more I've meditated on them, the more I've become convinced that the greatest versions are almost always the simplest: little more than soft bread, lettuce, tomato, and a mayo-based condiment to accompany the main ingredient. The reason this combination works so well is that it ensures the seafood, delicate in both texture and flavor, remains the focus. There's just enough contrast with the crisp lettuce and juicy tomato, but not so much that the fish gets crushed between the gears of heavy-handed sandwich-making.

This construction works whether the seafood is grilled, sautéed, or fried; whether it's finfish or shellfish, saltwater or freshwater. There's a reason po' boys are so damned good regardless of the filling you choose, and it has everything to do with an approach that lets you savor whatever the prime ingredient is.

This is why, when I set to work on a fried soft-shell crab sandwich, I immediately settled on this established approach. Nothing complicated, nothing clever, no "interesting" twist. Just plump fatties, battered and fried, bursting with tangy juices, and absolutely nothing to distract from that.

The first step in making these sandwiches is, of course, to prepare the crabs. You want to start with live ones, since shellfish go bad rapidly once they die. It's very easy to do, requiring only a few key steps, which you can review here.

When the crabs are trimmed, they're ready to be fried. I went for a basic beer batter with these, working roughly off of Kenji's batter for his fried-fish sandwiches (note that they, too, are simple in exactly the way I describe), but made a few small tweaks so it was better suited to soft-shells.

Mainly, that meant thinning the batter more, since I didn't want something as thick and heavy as the one Kenji applied to a slab of fish fillet. I also ditched the second flouring step (after the initial flour dredging and dunking in batter), a method that works great on fish but leaves the crab weighed down and suffocating in crust.

Immediately after it's battered, each crab goes into a skillet of hot oil until it's golden and crisp all over. As with most fried foods, you'll want to drain the crabs afterward on paper towels and sprinkle them with salt right away, while they're still hot. Otherwise, the salt just won't cling.

As for the sandwiches, like I said, they couldn't be simpler. Toast the buns; layer on the crabs, lettuce, tomato, and sauce; and you're all set, ready to enjoy. Save the chipotle aioli and sun-dried-tomato caponata for another sandwich. 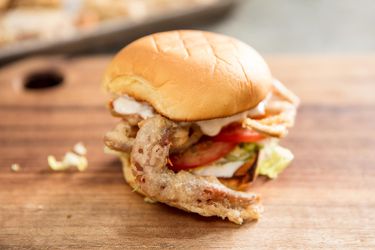 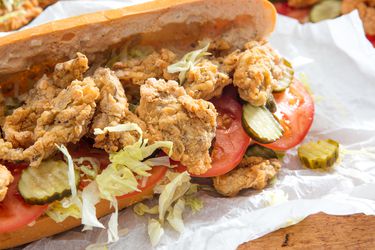 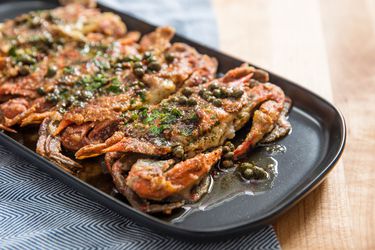