If you had to assemble a team of just two mercenaries to undertake a dangerous and unpredictable mission, you'd be crazy if you didn't make one of them a jack of all trades. You know, the kind of soldier who can fire off a machine gun while flying a small plane over a cliff's edge, all while wearing the most convincing old-lady disguise you've ever seen. That other guy, though, can be the wimpiest little weakling ever, as long as he has a single very necessary skill.

Well, it's the same story with stocks. If you're going to have just two, one of them should be incredibly versatile, like a chicken or vegetable stock. The other, I'd argue, should be fish stock (called fumet in French).

There aren't nearly as many applications for fumet as there are for those more versatile stocks, but when you need it, you really need it. An actual fish-based stock reinforces the flavors of a seafood dish like no other, whether as the primary liquid in a sauce or as the base of a fish soup. And, as with most classic preparations, fish stock comes with plenty of rules on how to make it the "correct" way. I've spent the past week testing out the main ones to see what matters and what doesn't.

Like all animal-based stocks, fish stock is made by gently simmering bones and scraps of meat, along with aromatic vegetables and herbs. In the case of fish stock, the bones typically include the heads, spines, ribs, and tails of mild, non-oily, white-fleshed fish. Snapper and bass are two of the most common options, but you could use bones and heads from any appropriate fish, including tilefish, halibut, and cod. Darker-fleshed and oily fish, like salmon, tuna, and mackerel, are not usually used in a classic fumet, since they impart a strong fish flavor. When it comes to fumet, the aim is generally to lean toward freshness and delicacy, not pungent fishiness.

For the aromatics, it's most common to use white and green produce, including onions, leeks, garlic, celery, fennel, parsley, tarragon, and bay leaves. Carrots, which are included in most aromatic vegetable mixtures, are often (but not always) left out of fumet, since they can add color to the stock. I've kept carrots out of my recipe, but I don't have a strong feeling about them one way or the other; include them if you want.

When I did my tests for chicken stock, I found that small-diced aromatics had a significantly bigger impact on flavor than larger pieces. This is even more true with fumet, because the cooking time is so much shorter. The increased surface area of small-diced vegetables results in a much faster extraction of their flavors, so that step shouldn't be skipped here.

Finally, the liquid in fumet is usually a combination of dry white wine and water. The wine functions in a way similar to that of lemon juice on fish, adding fresh, clean notes that help balance the fishy qualities of the stock. Most fumet recipes say to use just enough liquid to barely cover the fish bones. Given the short cooking time, it makes sense to maximize the ratio of bones to liquid to avoid watered-down results—reducing a thin fumet isn't a great option, since it can lead to murky flavors and a loss of freshness.

One of the big rules of fumet is that you have to obsessively clean the bones and heads of anything that might contribute off flavor and color. This means that the gills, which are dark and bitter, have to go, and as much blood as possible should be washed off.

There are trace amounts of blood all over fish bones, but you'll find most of it in a vein that runs along the spine, often hidden under a membrane. Removing that blood typically involves a process of soaking and scrubbing. It's a pain in the butt.

I was curious to see just how critical this step was, so I made a couple of batches of fumet, one with bones that I soaked and scrubbed free of any visible traces of blood, and the other using bones that I didn't wash at all.

The result was more subtle than I was expecting. The unwashed bones made a stock that smelled noticeably fishier than the version with washed bones, but the flavor was surprisingly palatable. All in all, it made a difference, but not a massive one. I'll still wash and soak my bones, but I'm less concerned with getting rid of every last drop of blood than I was before.

A lot of fumet recipes have you start by sweating the aromatics in oil before adding the fish bones, wine, and water. Sometimes, though, you'll see a recipe that skips this step and cuts straight to simmering.

I tried both, and once again the differences were subtle. To my taste, the batch made without sweating had a stronger wine flavor, which may be because dumping everything in the pot together offers less opportunity for the alcohol to cook off. If you sweat the vegetables, the pot is already hot when the wine goes in, which means you can quickly get it steaming hot—thereby vaporizing some of its alcohol—before the water goes in. Just as with the washing of the bones, the differences are small, but it seems worth doing.

Unlike most stocks, which are usually cooked for well over an hour, fumet is a fast affair. The flavors of the fish and vegetables grow muddy with prolonged cooking, while freshness is what we really want. Meanwhile, as with any good stock, we want to extract as much gelatin as possible from the bones, since that contributes to the body and richness of whatever is made with it.

The question, then, is this: What's the shortest possible cooking time that will maintain freshness without sacrificing gelatin extraction? I whipped up several batches of fumet and cooked each for a different length of time. The shortest was a 20-minute simmer; the longest was a full hour.

Amazingly, in just 20 minutes, I was able to get excellent gelatin extraction from the bones. Just look at the photo above of my chilled fumet in the spoon: total fish jelly. With longer cooking, you do get ever so slightly more gelatin and a firmer set when chilled, but it's not enough to make the overcooked flavor worth it.

When the process is quick and the results are great, I see no reason to argue.

For many stocks, a pressure cooker can be an incredible time-saver, while delivering some of the best results. It absolutely works wonders for chicken stock, for instance.

Fumet, as we've already established, is a quick stock even without the pressure cooker, but I figured some of you guys would be curious anyway, so I cooked a batch to find out. I let the pressure cooker run for 10 minutes at high pressure, then let it cool down on its own. (Releasing the pressure valve for rapid decompression would have caused violent boiling, which isn't good for the clarity of a stock.) After I opened it, I was greeted with a totally unpleasant fish smell, and the stock itself tasted even worse.

So don't bother with a pressure cooker. Unless, of course, you're a mercenary-for-hire who needs to MacGyver an explosive device. 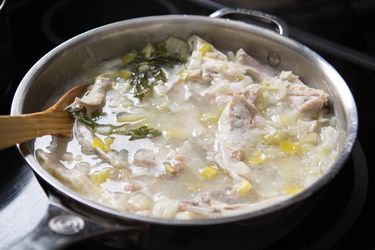 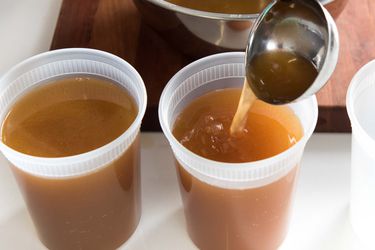 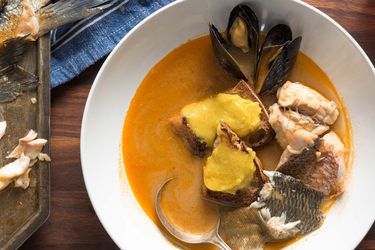 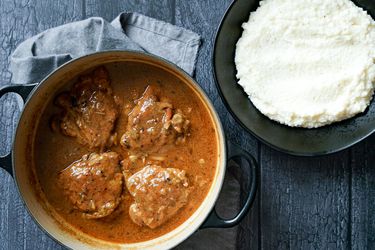