The absolute worst thing about baking a pie in advance is knowing it'll go soggy in an airtight container. Whether it's just a few hours en route to Grandma's house or overnight before the holidays, there's just no way around the moisture of the filling slowly migrating toward the crust. But that doesn't mean we can't throw a wrench in the works.

Long ago, a buddy of mine taught me that magnesium sulfate, better known as Epsom salt, can be dried out in the oven to create a safe but powerful desiccant. How powerful? Well, a few cups can shrivel up a pint of fresh raspberries in a matter of days, or turn a handful of sage into a pile of crispy chips overnight.

It's impressive, to be sure, but the logistics of surface area and circulation make it rather ineffective for drying any significant quantity of food. But for those of us less interested in dehydration than in simply combating humidity, it's a surprisingly helpful tool. Even better, it's cheap and easy to make at home. All you need is a quart of food-grade Epsom salt (no lavender or eucalyptus scents here).

Just pour it into a big brownie pan or rimmed baking sheet lined with parchment, and pop the whole thing into a 400°F (200°C) oven, giving it a stir every 15 minutes or so, until the crystals are bone-dry, about 75 minutes total. But wait, you say. Isn't Epsom salt bone-dry to begin with? Yes and no. Epsom salt is the hydrous form of magnesium sulfate, meaning it actually contains water within its crystals.

As it's warmed above 200°F, its bright and semitranslucent crystals become damp as that water is released, then increasingly opaque as they effloresce into a chalky white powder—anhydrous magnesium sulfate.

That whole process can hypothetically be done on the stove, but the nature of direct heat means the Epsom salt would require constant attention. In the oven, it needs only a quick stir from time to time to keep clumping to a minimum.

Once it's bone-dry, transfer the rocky pieces to an airtight container, like a roomy pie carrier, and close the lid tight. You can nestle a cooled pie in its plate directly on top, or cover the anhydrous magnesium sulfate with a sheet of cheesecloth before placing small pastries on it—think croissants, turnovers, or even a freeform peach pie (recipe coming soon!). While the anhydrous magnesium sulfate isn't harmful to ingest, a cheesecloth barrier prevents it from getting onto whichever food you're drying out. Whatever the case, be sure the container is totally sealed, or else your DIY desiccant will be contending with ambient humidity as well.

I don't mean to suggest this method keeps any pie or pastry as flaky and crisp as the moment it came out of the oven, but in side-by-side comparisons of cherry pies stored in containers with and without this desiccant, it made a remarkable difference in the texture of the crust. It's the perfect trick for keeping a make-ahead pie as fresh as possible for picnics and potlucks, but it's also useful for so much more. A thick layer of anhydrous magnesium sulfate in the bottom of an airtight container will also go a long way toward maintaining the crispness of candies such as toffee and peanut brittle in summer months, and it does a bang-up job of drying small quantities of fresh flowers and herbs (for those of us inclined to use colorful violets and mint as garnishes).

The best part is that anhydrous magnesium sulfate has no expiration date, so, while you will need to bake it again now and then to drive out the moisture it absorbs, it can be stored for repeated use. 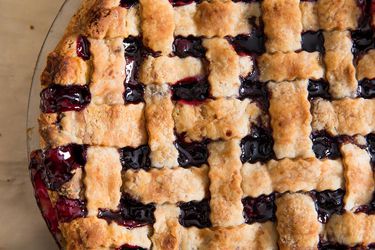 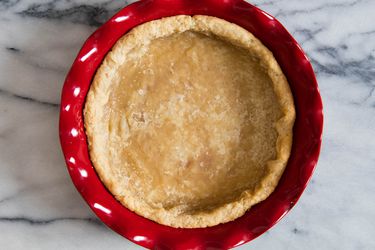