Whenever my husband meets someone remarkably unremarkable, he nicknames them "celery." I'm sure there's a "celery" in everyone's life—that friend who wears only monotone sweater vests and is an expert at fading into the background—but I think he's being too hard on the vegetable. Every good comedy ensemble needs a straight man, and celery is the overlooked stock character in almost every stew, braise, or jambalaya. Without celery's adept deadpan, short ribs couldn't nail their punch lines, and lamb shanks would fall flat.

In the childhood snack called ants on a log, celery lightens up rich peanut butter and chewy raisins with its vegetal crunch. And so it is with this soup that riffs on those same flavors, which I've affectionately named "ants on a bog." Although, in this case, there's a bit of a role reversal: In the soup, it's the creamy celery purée that's lightened by tart pickled grapes and an assertive peanut crumble.

The soup itself is very simple and follows the standard procedure for all puréed vegetable soups. It begins by sweating celery with onion, apple, and celery root (for extra celery flavor and a more natural creaminess). The vegetables are then simmered with vegetable stock or water until they're softened, before getting blended into a smooth soup.

Producing a full-flavored soup hinges on properly sweating the vegetables, and a lack of patience at this stage can make or break the dish. Sweating is a process that occurs over low or medium heat with a small amount of fat. The goal is to heat up the vegetables and aromatics just enough that the cell walls begin to soften and release their flavorful liquids and aromatic compounds, without any browning occurring. Browning adds rich, complex flavors to food, which is often desirable. But when you're trying to highlight a delicate vegetable like celery, browned flavors tend to dominate and muddy things.

Initially, the celery will dump a lot of liquid into the pan, but you want to continue cooking over low heat until much of the moisture has evaporated, adding fat and lowering the heat if anything looks like it's beginning to brown. Once you've reached the point where most of the excess moisture is reduced and the vegetables are tender and glistening, add the vegetable stock or water and simmer until the vegetables are completely softened. This takes about 30 minutes or so. Let it go much longer than an hour, and the vegetables' aromatics start to lose any trace of freshness, so you want to stop simmering before you start rolling down the flavor bell curve.

While the soup is simmering, it's time to work on the garnishes. Pickling is a great way to transform fruit, and grapes are no exception. Here, I pickle them in a simple mixture of sherry vinegar, sugar, and salt.

There are two ways to deal with the grapes themselves: leave them whole and peel them, or simply slice them in half.

Peeling is a lot more effort, but makes for a prettier garnish. Because the grape skins will actually become firmer when submerged in the pickling liquid, it also yields a more pleasant texture, and it allows the liquid to penetrate the grapes more thoroughly. If you often wake up in the morning thinking, "Man, I really want to peel some grapes," you should go with option A, as I did. There is no easy way to do it—you just have to hold the grapes very close to your face while you scalp away with your sharpest pint-sized blade. Your hand will cramp, and your vision will blur, but for me, it's worth it. (Some people meditate or do yoga; I prefer tedious, repetitive tasks.) If that's not quite your speed, option B—cutting the grapes in half—works just as well.

For the other garnish component, I make a savory peanut crumble. It's a skillful way to add interest to soups, salads, and roasted vegetables, all while dipping your toes in the dark arts of pastry. It's also an interesting change of pace from the more common toasted nuts or croutons often used as soup garnishes, and just as simple to make.

In a traditional crumble, the short (i.e., rich and crumbly) texture comes from a high ratio of fat and sugar, which minimize gluten development. In a savory crumble, some sugar is still necessary, but by adding cornstarch, we can significantly reduce the overall sweetness while still producing a crisp, crumbly consistency. The cornstarch creates a very tender crumble, which almost melts into the soup once it's added, providing body and richness as well as texture.

To make it, I massage the sugar and cornstarch with peanut butter, softened butter, flour, and seasonings until the mixture holds together in small clumps. It's fairly pasty at this point, but after 15 minutes in the oven, it becomes drier and more crumbly..

Many seasonings and spices can be equally at home in an entrée or a dessert, but the addition of onion powder helps the crumble keep its feet planted firmly in the savory dimension. I also add some dried dill, which is in the same family as celery and contains similar aromatic compounds. If you're not a fan of peanuts, you can switch up the flavor with any nut butter you like, but try to stick with an unsweetened variety, as this crumble can quickly cross the line into that weird limbo between savory and sweet.

When the soup is done simmering, I carefully blend it in batches, never filling the canister more than halfway to avoid ending up with soup on the ceiling. I always prefer using a blender for puréed soups, especially a high-powered one with the muscle to reduce the vegetables to a truly smooth and silky consistency. This is particularly important with celery, since it's loaded with tough, stringy fibers that can create a gritty feel. You may need to pass the soup through a fine-mesh strainer after blending to remove any stubborn fibers, especially if you're using a less powerful blender.

I then return the soup to the pot for a final seasoning with salt, pepper, and a few tablespoons of the grape-pickling liquid to perk it up. You can serve it right away, with a big spoonful of savory peanut crumble and the sweet pickled grapes. Just remember that the garnishes on the soup really are worth the effort of making them, because celery was never cut out to get the spotlight all to itself. In this soup, it can only nail its role as the quirky best friend when it's part of an ensemble. 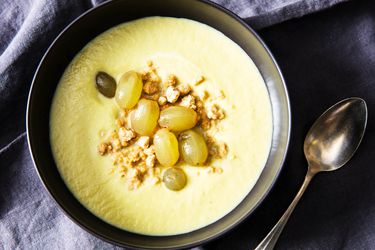