When I was a kid, there was a weird pirate-themed bakery called Bagel Bay, set up in an abandoned Taco Tico near my elementary school. Sometimes Mom would hit the drive-thru so my little brother and I could have a reasonably wholesome after-school snack. If they were on the menu that day, nothing could top their freakishly purple-hued blueberry bagels, but my fail-safe was always cinnamon raisin.

Now, one of those recipes would probably get me fired, but the other is on Kenji's extremely short list of approved bagel flavors—if only because he has the good sense to acknowledge Adri's excellent taste in bagels. And I happen to agree on this point. Cinnamon raisin bagels are where it's at: just barely sweet and supremely aromatic, with a flavor that can stand up to the tang of cream cheese.

The cinnamon raisin bagels of my childhood seemed to be cut with a touch of whole wheat flour, an unexpectedly savvy move for a drive-thru bakery with a peg-legged parrot mascot. Obviously, the grainy flavor of whole wheat pairs well with both cinnamon and raisins, but it also has a slightly tenderizing effect on the dough, making it easier to chew a mouthful of dried fruit in an already-chewy bagel.

It's a move I've chosen for my recipe, too, as I've found that just a little whole wheat flour—a mere two and a half ounces—can go a long way toward improving both flavor and texture in a bagel with a chewy mix-in, like raisins. If that doesn't sound good to you, feel free to apply the same ratio of cinnamon and raisins to my basic bagel dough instead. But don't increase the cinnamon; just shy of a tablespoon is all the dough can handle before it'll start developing problems with its rise.

As with my original recipe, these bagels start off with a yukone—a quick-cooked paste of flour and water that helps improve the browning, shelf life, and crumb of my bagels (more on that here).

As it turns out, the yukone can be made and refrigerated up to 24 hours in advance. Not that a recipe like this needs to be broken into stages, but, to give a real-life example, I'd just started a batch when a minor family emergency pulled me from the kitchen. Unsure of when I'd be back or what to do with my cooling yukone, I popped it in the fridge. After bringing it back to room temperature, I found it performed just as well as a "fresh" yukone in both plain and cinnamon raisin bagels.

Whether the yukone is allowed to cool after cooking or warm up after refrigeration, once it hits 75°F (23°C), it's added to the remaining ingredients and mixed up with a food processor in the same way. In just 90 seconds, the dough will come together in a warm, relatively smooth ball.

In the course of testing, I discovered it's best to knead in the golden raisins by hand. If they're pulsed for even a few seconds in a food processor, they'll be cut into small pieces that can easily dry out or burn in the oven. It takes a bit of elbow grease to incorporate them by hand, but it's worth the effort; the whole raisins will stay plump and moist even after baking.

From there, you'll divide the dough into eight portions and boule them up. The pieces may look a little rough at first, but keep at it until the seams all but disappear. As the portions are rounded up, the raisins will also slowly migrate away from the surface of the dough and toward the middle—a handy thing, as this helps protect them from drying out in the heat of the oven.

Even so, the inclusion of whole wheat flour will mean that the individual boules won't have quite the silky-smooth texture of plain bagel dough. But don't worry: So long as you use a food processor, the gluten will be sufficiently developed. (I absolutely do not recommend mixing this dough by hand, or even on a stand mixer, where it threatens to damage the gears of even the sturdiest machine.)

How to Shape a Bagel

As with my plain bagels, the portioned dough is covered and rested for 15 minutes before shaping, which is a simple matter of poking a hole in the middle of each ball and stretching it into a three-inch ring. The rings are transferred to a well-greased, parchment-lined baking sheet, then covered and refrigerated for 24 to 36 hours.

During that time, the bagels won't seem to rise at all, but that's perfectly normal. Like the originals, they're taken straight from the fridge and boiled in malted water, where they'll swell a bit in the hot water, then puff as they're baked in a 425°F (218°C) oven. The bagels are done when they're blistered and golden brown all over—after about 25 minutes, if your oven runs true to temperature.

Do be sure to let the bagels cool at least 15 minutes before cutting, as a serrated knife can really mangle the hot bagels if their crumb and crust haven't had a chance to set. But once they're slightly cool, they'll slice like a dream. They'll be crispy on the outside, with a welcome tenderness to their middles, and whole grain flavor that plays against the chewy dried fruit and fragrant cinnamon.

Again, like the originals, cinnamon raisin bagels are vegan by nature, and they'll keep up to three days in a paper bag or wrapped in parchment. Thanks to the whole wheat flour and extra moisture from the raisins, as they near the end of their shelf life, cinnamon raisin bagels will actually seem a bit fresher than plain. So whether you toast 'em up to enjoy plain or spread them with your favorite cream cheese, when you take the time to whip up these homemade bagels, you'll be reaping the reward for days to come. 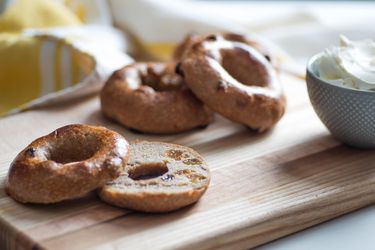