*I will not stoop to calling these "brookies"; get off my lawn.

This transformation largely reflects the loss of surface area that accompanies the switch from a cookie to a brownie-like format, but a cast iron skillet is crucial in helping the cookie dough crisp up around the edges without drying out in the middle. In the sort of aluminum cake pan I recommend for layer cakes, the cookie dough would bake evenly from edge to center, with none of those delicious textural extremes.

While it's true that most any recipe is up for the cast iron challenge, a few tweaks can make the results even better.

Mix and Match Your Chocolate

As with my old-fashioned chocolate chip cookies, grabbing a few different chocolates will go a long way toward creating some depth of flavor in the skillet cookie, with bites of creamy vanilla from white chocolate to contrast the bitter intensity of dark. Beyond that, using chopped chocolate rather than commercial chips will give the skillet cookie a brownie-like consistency, as chopping creates more than chunks—it also produces a powdery blend of chocolate flecks and shards that melt into the dough.

Cut Back on Sugar

When baking my chocolate chip cookies in skillet form, I cut the white sugar by 40%. This allows for a bit more gluten development, creating a chewier consistency. (In a drop cookie, which has a higher proportion of surface area for moisture loss, that would only make the finished product tough and dry.) This reduction brings out more of the brown sugar flavor while reducing sweetness overall, making a skillet cookie better for serving à la mode—and trust me, you should take a page from the Tony Roma's playbook and serve it à la mode.

Since the skillet format reduces the total surface area of the cookie dough as it bakes, there's less Maillard browning overall. To make up for that loss of flavor, I like to add a scoop of malted milk powder for an infusion of toasty depth (if you've read my ode to malted milk powder, you probably saw that coming). If you don't have some already, you can pick it up at any supermarket—look for plain, not chocolate, Carnation or Ovaltine, which is usually sold alongside hot cocoa mix—or pick up a specialty brand, like Hoosier Hill Farm, online.

It's not that the cookie dough will stick in a well-seasoned cast iron skillet; it's that a generous coating of butter will really help give those edges an amazingly rich, crispy-fried texture. Just be sure to use soft rather than melted butter, and don't be shy.

Instead of scooping the dough into individual portions, scrape the full batch into a 10-inch cast iron skillet, then spread it into an even layer and bake at 400°F (200°C) until puffed and golden brown around the edges but still a touch wobbly in the middle, about 35 minutes.

Because cast iron retains heat so well, carryover cooking will continue to "bake" the cookie long after you pull it from the oven. For that reason, it's important to let it cool at least 45 minutes before serving; prior to that, the giant cookie may seem molten and raw in the very center. But with a little time for the crumb to set up and cool, all will be well.

It's a great way to whip up dessert for a crowd when you're in a hurry, since getting rid of the scooping step saves substantial time—or whenever you're craving something warm, gooey, crisp, chewy, and smothered in ice cream. Which is me, basically all the time. 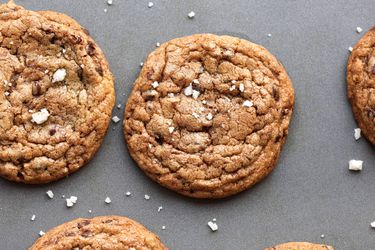 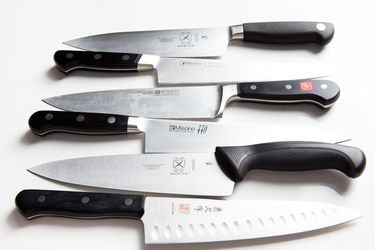 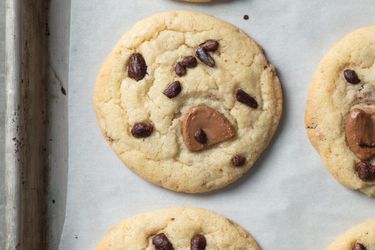 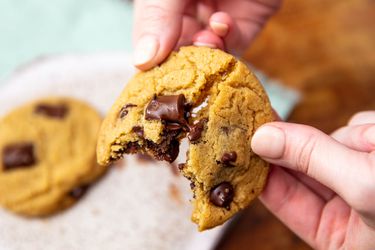