I don't have much of a sweet tooth, but even I don't fully understand the hate toward these dishes. Yes, as stand-alone creations, they're disgusting. But they're not meant to be eaten on their own. Particularly popular as part of the Thanksgiving table, these are foods that are intended to be served in small doses alongside a variety of other foods that are savory, tart, and rich. Just as I wouldn't want to drink a glass of maple syrup, but still love it on pancakes, extra-sweet sweet potato dishes can work when they're a small part of a larger, more complex, and balanced whole.

Let's start with the most basic fact about this dish: Although they're commonly described as "yams," which are native to Africa and Asia, the root in question here is actually the sweet potato, native to the Americas. We could be more accurate and call these "candied sweet potatoes," and many people do, but "yams" still appears to be the more frequent term used (at least, according to Google search data).

Most recipes begin with a par-cooking step for the sweet potatoes before combining them with the syrup and finishing them in the oven, so that's where I began my testing. I baked the potatoes whole, and I simmered them both whole (with and without their skins) and precut.

Baking didn't work well, since gauging the doneness of the potatoes was difficult, and the potential to accidentally cook them until they're over-soft is high.

The simmered potatoes showed marked differences straight out of the water: The skin-on whole potatoes had the most flavor, while the pre-peeled, presliced ones had the least, as they lost it to the water. But, once the potatoes were combined with the sugar syrup and baked, the differences disappeared.

Eventually, I began to question the par-cooking step as a whole. Why, exactly, was everyone doing it? I ran a couple test batches in which I cooked the sweet potatoes from start to finish in the oven, first covered with foil until tender, then uncovered to finish. They came out better than any of the ones I made using the par-cooking approach so common to other recipes. That's great news, because it's a much easier recipe when you don't have a two-step cooking process for the potatoes.

Sugar and Spice and Everything Nice

The solution is to start with significantly more water, about three times as much, to fully dissolve the sugar. After that, cook the syrup beyond 212°F, to about 220°F (104°C) or so, to drive off the excess water and create a true syrup—one that won't separate from the fat with longer cooking.

Let the haters hate. It's easy to flat-out reject something without giving it more than a passing thought. It's far more rewarding to address the legitimate shortcomings of a dish and turn it into something almost anyone would love. 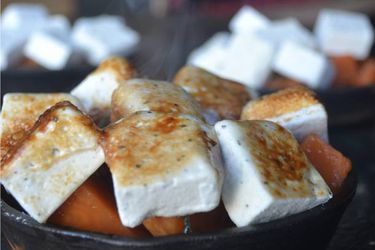