Korean tacos have taken a little bit of Korea, a little bit of Mexico, and a whole lot of L.A., and combined them all so perfectly that there's now a damn near cult-like following all across the country. Now that nobody wants to miss out on this combo of juicy seasoned meat with flavor-packed sauces stuffed into toasted corn tortillas, you can find them at food trucks and storefronts in every major city. It's like Korean-Mexican fusion was one of those things that was just meant to happen.

So how do you take something incredible and make it even better? Add a bit of Chinese twist to it. Let me tell you about a little something I call Bulgogi Scallion Pancake-adillas.

Pancake quesadillas sound strange, until you realize that I'm talking about flaky, chewy Chinese-style scallion pancakes here. Thin, crispy, and super-savory, they're more like the onion-y love child of a croissant and a tortilla than they are the American breakfast food. And when you pack them with marinated bulgogi-style steak and two types of cheese, it makes total sense.

Making these Korean quesadillas is easier than it seems. To start, I thinly slice and marinate the steak for the bulgogi in a soy sauce mixture with classic bulgogi ingredients, like gochujang, sesame oil, and rice vinegar, as well as brown sugar to sweeten everything up. (Pear puree, the more traditional sweetener, seems a little like overkill for a recipe that's already packed with so many other flavors.) It's important not to add any salt, as soy sauce already lends enough to enhance the flavor without being overwhelming. In order to get the most even distribution of marinade, I combine everything in a large freezer bag, squeeze out the air, shake the bag, and set it in the refrigerator while I make the scallion pancakes.

The best part of scallion pancakes is the crispy layers, so I follow Kenji's guide to extra-flaky scallion pancakes. This method relies on rolling dough out into disks, brushing them with sesame oil, and then rolling them up like jelly rolls. Then I flatten everything again, sprinkle it with green onions, and repeat until there are multiple layers of green onion and sesame oil inside the pancake dough. At this point, the dough rounds resemble green-flecked tortillas, and they're ready for cooking in just enough oil to get them nicely golden.

Next I turn back to the beef, which is now good and marinated. I quickly cook it in a hot skillet after removing it from the marinade, then pile it onto two of the freshly cooked scallion pancakes, along with plenty of cheese. I prefer a Tex-Mex-style mixture of cheddar and jack or pepper jack here, but Oaxaca cheese also works well.

Then it's back to the skillet, where I cook one quesadilla at a time and close them up with an additional bare scallion pancake on top. Once the cheese begins to melt and the bottom is nicely browned and crisp, I carefully flip the quesadilla with a spatula and cook until the cheese is entirely melted and the bottom scallion pancake is crisp enough to easily support the weight of the fillings. As these cook, you might see some of the cheese ooze out of the sides and hit the pan. Don't try to stop it—those crispy browned cheese bits are the icing on this multicultural cake.

It's almost impossible to resist eating right away, but take the time to garnish them with cilantro, green onion, and a drizzle of extra gochujang. Then you should feel free to shovel them down. It's not like you'll be able to hold yourself back any longer, anyway. 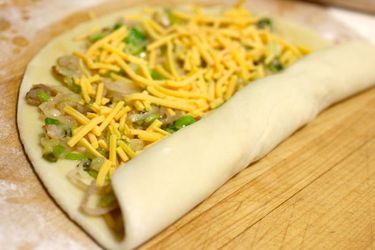