This is an article about oatmeal pancakes, and damn good ones at that. Toasted oats. Browned butter. Tangy buttermilk. A texture so light and fluffy it makes clouds nervous about keeping their jobs. But it's also an article about old friends and dysfunctional personalities. I'm not sure how all these things exactly tie together and I can't vouch for the quality of the storytelling, but I can vouch for the pancakes. I'm starting with a quick an unreasonably long tangent.

I'm going to tell you about what was, in retrospect, one of the lowest moments of my life. In fact, I'll just say it outright: I was a complete, unabashed, undiluted a$$#ole, and to this day I'm still waiting for October 21, 2015 to roll around so that I can steal a DeLorean, ride it back in time to 2006, and give myself a good hard smack upside the head.

I'm a pretty relaxed and groovy guy these days, but it wasn't always that way. I've gone through many phases in my life, some more becoming than others. Down there close to the bottom rung of the relaxed-and-groovy ladder is 2006, right in the midst of my time as a full-time line cook. For years I went through a phase where each and every person who worked for me or with me ended up in tears due to the unfair demands I placed on them. In an industry full of hard-asses, I was the hard-assiest of 'em all.

We had two basic rules in the kitchen: If you can lean, you can clean (i.e. there is no reason that you should ever be standing around twiddling your thumbs in a working kitchen), and make it nice (i.e. zero shortcuts, no hacking your way through prep, if there's anything at all you can do to improve the quality of what's going out to a diner, you do it, even if it means spending another night doing prep work off the clock). Those two rules covered almost any situation you'd find yourself in and demanded that you are on your toes and aware of your surroundings 100% of the time. This is no way to go through life. At least not if you want that life to be long and joyful.

"worst of all, I'd judge other people's food by the same standards"

The worst part? The stress of the kitchen would weave its way into my non-working life. I'd find myself letting out audible huffs when I got stuck behind a slow cart in the supermarket. I'd involuntarily call out "behind!" or "corner!" as I walked down a busy sidewalk. And worst of all, I'd judge other people's food by the same standards I was held to in my restaurant, a standard that nobody in the real world does or even should aspire to.

So what's all this got to do with pancakes? Well, at the time I was living with Paula, one of my closest friends from college. A tiny little sharp-as-a-tack Colombian girl with a soft voice but a big warm personality and a sense of humor that could put a smile on a monkfish. I woke up one morning after a particularly rough Saturday night service and found her making pancakes in the kitchen for some of our friends (including the other tiny Colombian woman who would later become my wife).

The pancakes she was making? They came from a box of Aunt Jemima pancake mix that she had bought from the bodega down the street. I can't remember exactly how it went down (and I'm sure my wife will remind me after reading this), but I undoubtedly made some sort of unintentionally belittling and dismissive comments about the evil of boxed mixes. I didn't stick around to find out—I had to get back to the restaurant to prep for Sunday night service—but I discovered later on that I'd made one of my closest friends feel so low that the brunch ended in tears before it even started.

I'd never felt as terrible as I did when our mutual friend confronted me and called me out for being the jerk I was. I swore that day that snobbishness, insensitivity, and bringing other people down would no longer be any part of my personality. I'm not all the way there yet, but I've come a long way.

It's been nearly a decade since that day and Paula and I are still close friends (it helps that she married my first college roommate). We don't live together any more, but she's only a 10 minute walk away. I was reminded of this episode when she and her husband offered me a bag of their favorite oatmeal pancake mix a couple weeks ago.

I took the bag, followed the package instructions, and had some darned delicious pancakes for breakfast.

Does it say something about me that my first reaction after eating those pancakes was damn, I've got to come up with my own oatmeal pancake recipe, STAT? Perhaps, though I'm not sure what that thing is. In any case, that was the inspiration, and I hope these pancakes are worth the short story.

To start my recipe, I used the same basic ratio of dry ingredients, eggs, and wet ingredients as in my standard Light and Fluffy Buttermilk Pancakes, substituting part of the all-purpose flour with oats that I ground up in a blender.

The first question is what types of oats to use. At the supermarket, you'll find three main varieties. Rolled oats are oats that have been pressed through steel rollers to flatten them into thin flakes. Instant oats are rolled oats that have been par-cooked then dehydrated again. Finally, steel-cut oats are oats that have been cut without flattening them. The general consensus is that steel cut oats, though they take the longest to cook, have the best flavor, and my testing bore out the same conclusion. But even with steel cut oats, the oat flavor in the pancakes was mild.

Perhaps adding more oats was the trick? I tried adding higher and higher proportions of oats and indeed it did develop more flavor, but it also led to pancakes that were more dense and gummy. Without the ability to form gluten the way wheat flour does, an all-oat pancake lacks structure.

Toasting the oats over medium heat in a dry skillet before grinding them was the ticket. It's a trick I sometimes use when I'm making a bowl of oatmeal and not feeling lazy about it (it's definitely something that fits squarely into the "make it nice" ethos). Just like toasting spices, toasted oats develop flavors and complexity, lending a nutty, toasty depth to my pancakes.

Since I already had a pan out hot and ready, I decided to take a cue from my past adventures in chocolate chip cookies and cornbread by browning my butter.

It crossed my mind that toasting my oats in the browned butter might unlock some sort of extra-magical powers, but all it did was lock up the motor of my ultra-fancy blender, the one with a motor that is guaranteed to be un-lockup-able. It also turned the oats and butter into a paste that after only a few brief minutes of curing formed a solid-as-concrete block in the bottom of the blender. I had to resort to metal utensils and a full arsenal of handy expletives to chip it away. I do not recommend grinding butter-toasted oats to anyone aside from construction workers and concrete-boots-at-the-bottom-of-the-river-style hitmen.

Using my scale to do the measuring made it easy to substitute the right amount of oats into my pancake recipe while still maintaining the same overall ratio of wet to dry ingredients, though in the end I found I needed an extra ounce of oats to really bulk up the flavor to the right level. If you don't own a good scale, I strongly recommend you pick one up. It's by far the best and most accurate way to bake.

Because oats lack the gluten structure of regular wheat flour, I also found that I needed to add a bit more baking powder to the blend to help it rise enough to make nice and fluffy pancakes. Two teaspoons of baking powder and a half teaspoon of baking soda was the right amount. A full 1 1/4 ounce of sugar (that's about 3 tablespoons) and a teaspoon of kosher salt (about 1/2 a teaspoon of table salt) provided a sweet and savory balance.

For my wet ingredients, I stuck with 2 whole eggs along with 2 cups of buttermilk.

This produces a batter that is on the thicker end of the spectrum for pancakes, but don't worry—they bake up light as a feather. As with all pancakes, it's key not to over-mix the batter, which can overdevelop gluten and cause the pancakes to turn tough. You want to mix just long enough that there are no big pockets or streaks of dry flour left. Plenty of lumps is totally fine!

To cook my pancake, I use my prototype Baking Steel Reversible Griddle, but if you don't have a griddle, a nice heavy pan will work just as well. It'll just take more batches to get you there.

Have you ever noticed that sometimes pancakes come out with a sort of mottled, splotchy, white-spots-on-gold-background appearance while other times they come out perfectly even golden brown from edge to edge (think: McDonald's pancakes)? What gives?

It's all a matter of how you oil your cooking surface. Use plenty of oil or butter and your pancake batter will not stick at all. As bubbles form underneath it, those bubbles actually lift parts of the pancake away from direct contact with the pan. It's those bubbled spots than wind up as pale sections in your finished pancake.

Use a very little amount of oil and your batter fuses to the cooking surface as soon as you ladle it out, releasing only after it's had a chance to brown properly.

That's the reason why most first batches of pancakes—when there's fresh oil on the griddle—have a spottier appearance than subsequent batches where the layer of oil is sparser. Want perfectly even golden brown pancakes from the get-go? Make sure to very carefully wipe out any excess oil from your griddle before you start adding the batter. Want spotty pancakes start to finish? Add fresh oil to the griddle in between each batch.

I'm not particularly picky when it comes to these two styles, but it's one of those things that's good to know in case you vastly prefer one over the other.

With a light and moist texture, crisp edges, and rich, buttery, toasted oat flavor, these pancakes are made for stacking.

I haven't yet served these pancakes to Paula, but I'm hoping that she'll like them. I'm even planning on gifting her with my own jar of pre-made oatmeal pancake mix. Maybe it'll save her a trip to the corner store the next time she feels like pancakes in the morning, but I'll be her biggest supporter if she ever decides to invite Aunt Jemima over for brunch again. 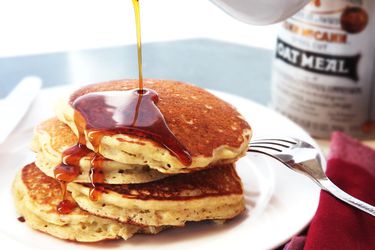 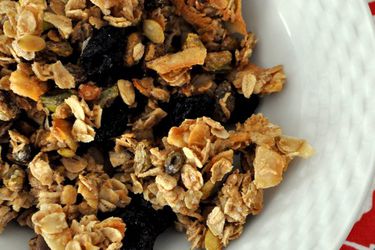