My wife, Adri, and I have been doing a lot of home remodeling in the past year or so, and our general philosophy has been "If it's cheaper to buy the tools and do it ourselves, we're buying the tools and doing it ourselves." Since I'm a tool nut, this has been awesome for me. What I've quickly noticed is that the projects I'm most inclined to take on are defined by whatever the newest tool in my arsenal is. When we finally splurged for that air compressor and nail gun, there wasn't enough molding to replace in the house to satisfy my appetite for the hiss-ga-chuk noise of the nails going in. I lived for that noise.

The same thing happens to me in the kitchen. I recently tested a whole slew of skewers to find the best ones for grilling, and since then, this has been the summer of grilled-things-on-a-stick, whether that's yakitori, mushrooms, shishito peppers, or pork satay.

And I'm not through poking-and-grilling yet. This time, it's sweet-and-savory Thai-style chicken satay with a tamarind-peanut dipping sauce. It's a staple dish of Thai restaurants in the US, but so, so much better if you make your own.

All in all, this Thai-style chicken satay is less complicated than the double-sauce-plus-marinade Balinese Pork Satay recipe I published a few weeks back, which makes it an appealing dish for a relaxed, late-summer after-work supper or weekend appetizer. The most complicated part is actually the Peanut-Tamarind Dipping Sauce, which, if you're feeling extra cheaty, you can make a quick version of just by stirring together some chunky peanut butter, store-bought curry paste, and lime juice (in place of sour tamarind paste); seasoning it with soy sauce, garlic, and sugar; and loosening it with water, making it an under-five-minute affair.

For the chicken itself, all you need to do is put together a simple marinade, which I find fastest and easiest to make with a mortar and pestle. I start by toasting some whole coriander seed and white pepper (the microwave actually makes this quite a quick process) and crushing them to a powder in the mortar. Next, I add palm sugar—you can use white or brown sugar if you can't find palm—fresh garlic, fresh ginger, shallots, fresh turmeric, and fresh lemongrass. Those last two ingredients might be the only ones that give you a bit of trouble, though, at least around where I live, even the big chain supermarkets, like Whole Foods and Safeway, carry both. Worst-case scenario? Using a pinch of dried turmeric in place of fresh will still give you delicious results.

Once I've pounded those ingredients into a paste, I add some coconut milk, fish sauce, and a little salt. The marinade should be quite salty and sweet at this point. The salt helps to break down the muscle structure of the chicken pieces, allowing them to retain more moisture as they cook, while the sugar helps them caramelize and brown on the grill. Even an hour in the marinade is long enough for this to take place, though you can leave the chicken for up to eight hours, or even overnight, with no ill effects. The marinade is acid-free, so you won't run into the problem of mushy or chalky meat, as you can with meat that spends too long in an acidic mixture.

The final precooking trick is to make sure the chicken is packed on there tight. Restaurants and the occasional street vendor will sometimes slice chicken thin and thread it onto skewers like a ribbon. This makes for faster cooking (yay!), but pretty much guarantees overcooked meat. Packing chunks of chicken on tight reduces the ratio of surface area to volume, which in turn allows you to char the exterior for flavor while maintaining a nicely moist interior. For this reason, I also recommend using juicier thigh meat instead of lean chicken breast.

To get the meat on the skewer, I use this trick:

Placing a halved onion or potato on the cutting board and using it as a backstop for the sharp skewer makes short work of threading, without the risk of poking a pointy stick covered in raw chicken juices through your fingertip.

Grilling this chicken couldn't be simpler. With fatty pork satay, you need to fan the flames constantly to prevent flare-ups from engulfing the meat. Chicken, on the other hand, is lean enough that this isn't really an issue. Just place the skewers over a preheated grill at moderate heat (using two-thirds of a charcoal chimney on half of a standard kettle grill, or medium-high heat on a gas grill), and cook them, turning, until they're done. It takes about six minutes or so.

While the chicken is cooking, I like to brush it with coconut milk, which helps build up a well-browned coating on the exterior of the chicken as it reduces and its sugars caramelize. You end up with chicken that's browned to an almost charred appearance on the outside, but with no acrid flavors at all.

Pair the satay with chopped cucumbers and shallots and a spicy Thai-inspired salad (like this pomelo, green bean, and zucchini version), and you've got a satisfying meal that's still light—light enough that you might want to get up and grab that air compressor when you're all done.

Now, who needs something nailed? I've got a nail gun, and I'm ready to use it. 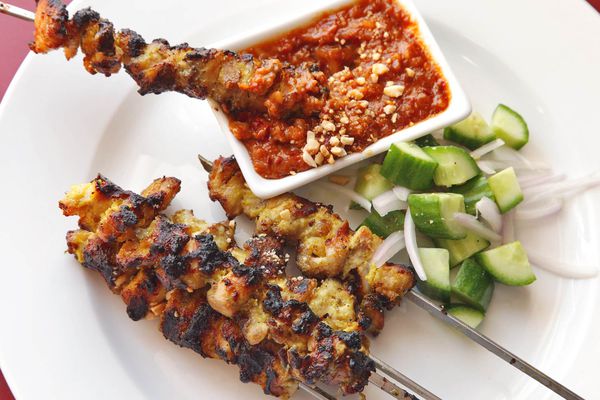 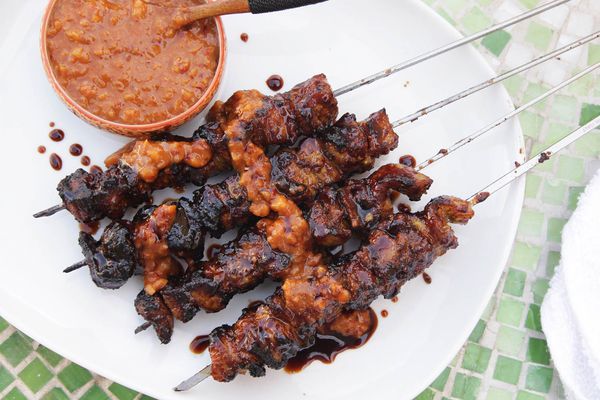