"For those unaccustomed to consuming alcoholic drinks that taste like, well, alcohol, the toddy can be a bit of a challenge."

There is plenty to imbibe this time of year: eggnogs and flips of course make the list. But as spirits columnist Jason Wilson pointed out in his recent piece in the Washington Post, one style of seasonal beverage is worth turning to from the first frost: the venerable, and reliable, hot toddy.

At its most basic, the toddy is almost the simplest of all spirituous concoctions: liquor, sugar, hot water—done. But as with other similarly easy preparations, the simplicity of the toddy's construction is in contrast with the substantial appeal of the finished drink. Though as Wilson writes, this wintry mixture isn't for everyone, especially novice drinkers.

"A toddy, after all, is not a young man's drink," he writes. "One does not immediately transition from the youthful folly of, say, Four Loko or a raspberry vodka to mature enjoyment of a hot toddy."

The challenging aspect of a hot toddy that Wilson refers to is also one of its greatest charms: the drink's lightly adorned, big-and-boozy flavor. Unlike most other mixed drinks, where the base spirit's character is tweaked with assorted other flavors and modifiers, the hot toddy uses nothing but a twist of sweetness and a little dilution, which—as Wilson writes—only serves to enhance the liquor's flavor.

For those unaccustomed to consuming alcoholic drinks that taste like, well, alcohol, the toddy can be a bit of a challenge. To those who genuinely like the taste of whisky, rum, or almost anything except vodka (I can't recall coming across a tequila toddy, but such a thing is not without potential merit), the hot toddy is the way to go.

"You want the base spirit to be big and flavorful."

Toddys are also flexible; you want the base spirit to be big and flavorful—single-malt scotch, pot-distilled Irish whisky, cask-strength bourbon, rich and dark rum, even the heavy maltiness of Dutch genever—and you can toss in other elements such as a strip of lemon peel and a couple of cloves while keeping the drink true to form.

Wilson also writes that the toddy has many relatives: in addition to simple variations that use honey or maple syrup or other sweeteners in lieu of sugar, there are historic versions such as the apple toddy, made by mixing a baked apple in the drink and doctoring it with apple brandy, as well as contemporary twists that use liqueurs and flavored syrups to give another dimension to the drink.

I've turned to the toddy once this season, and it's not even officially winter. My first round was made with the lightly smoky Ardmore single malt and a lump of demerara sugar. Later tonight I may brush away the chill with a toddy dosed with Red Breast Irish whiskey and a dab of honey.

What's your favorite approach to the hot toddy? Any suggestions for other readers? 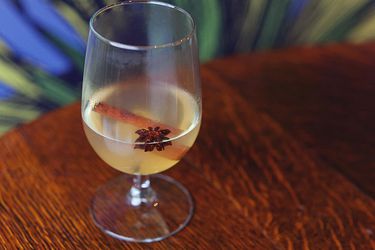