I'll be honest, this article could be all of two sentences, because I could just tell you the following: Season salmon steaks. Grill until cooked to your desired doneness, and serve. And that wouldn't be entirely bad advice—salmon steaks are, generally speaking, pretty easy to grill.

But that also wouldn't be very helpful, and it wouldn't show off any of the cool tricks that make the process even easier, with better results. Perhaps the trickiest thing with salmon steaks are the belly flaps—the parts that look like little legs on each steak. Because the belly flaps are so thin, they cook the fastest and are easy to break when you attempt to turn or lift the steaks.

To avoid that problem, I like to turn to the old-school technique of de-boning the steaks and then rolling and tying them into secure little wheels. By evening out the shape of the steaks into rounds, the fish cooks more evenly, and broken belly flaps are pretty much a non-issue. Plus they're boneless, which makes eating them that much easier.

To start, set a salmon steak on your work surface. You're going to need a sharp knife and some butcher's twine, as well. I've found that it sometimes helps to have some bamboo skewers on hand, too, which should be soaked in water for at least 15 minutes before hitting the grill, so you probably want to get those soaking now.

Begin by inserting the knife between one of the belly flaps and its inner membrane.

Being careful to work along the membrane and not cut into the meat, carefully slide the knife under the membrane, cutting it from the meaty portion as you work toward the tip of the belly flap. Use the knife to trim off any bits of membrane that may be left behind.

Next, start working along the membrane in the opposite direction, toward the spine bone in the center of the steak.

Working close to the bone to avoid losing any of the meat, cut the meat away from the spine.

You may encounter some pin bones that radiate from the spine into the flesh, which will impede the progress of your knife. Carefully pull those bones from the meat: they should slide out with little effort.

It's also always good to feel around the meaty portions of the salmon for other pin bones. If you feel one, use fish tweezers to grab the bone and lift it out. If the bone is sticking up, sometimes even fingers will work, but try not to dig into the flesh—tweezers are better for delicately probing beneath the surface.

Now work your way over to the other side of the spine bone and cut it free of the meat there, as well. Trim the inner membrane from the other belly flap, just a you did before.

The spine should be nearly free now. (I can just see those salmon "legs" dancing with joy!)

One small cut is all it will take to completely remove the bone. Some folks also cut out the sliver of darker brown meat just above the spine, going all the way to the skin, but leaving the skin intact. I like that brown meat and leave it in, but it's up to you—feel free to trim it out as well.

Prepare one Belly Flap for Rolling

Next, I take my knife and slide it between the skin and meat of one of the two belly flaps, very carefully cutting the skin free, but leaving it attached where the belly flap meets the main section of meat.

Now the steak is ready for rolling. Fold the belly flap that you just separated from its skin, and bend it up into the space where the spine used to be.

Then take the other, skin-on belly flap and curl it under, forming a round shape with the salmon steak.

Now, take the flap of skin and wrap it around to close the whole thing into a nice little round package.

At this point, the rolled steak isn't secure, so just hold it as best you can while you get the string ready for typing. If it comes undone, just re-wrap it into the same little round shape.

Wind a piece of butcher's twine around the rolled-up salmon steak.

Tie it with an overhand knot (as you would when starting to tie your shoelaces); I actually like to wind the overhand knot over itself twice, since this will hold better on its own once you tighten the string.

Then pull it tight.

And secure the string with a second overhand knot.

The butcher's twine should be centered on the steak. If you find that it's slipping off, which sometimes happens with thin steaks, or steaks that taper due to the shape of the salmon's body, it can help to insert a bamboo skewer through the roll, passing through each of the belly flap pieces and the main meaty portion of the fish, then out the other side. I found that most of my strings here wouldn't stay put, and ended up putting skewers through all my steaks, which you will see below (if you do, winding the string around each end of the skewer will keep the whole thing even more secure).

This is a little tip I got from the chef Bryan Voltaggio, who once told me he soaks just about any fish he's about to cook or grill in a salt-water brine for 10 to 15 minutes.

I think it's a good tip. First, the salt-water brine washes the fish, cleansing it of any juices that may be starting to smell a little fishy (the fish's liquids are usually what starts to smell first, even if the fish is still fresh, so rinsing them away isn't a terrible idea). Second, the brine gently seasons the fish. Third, Voltaggio claims that the salt helps firm the fish a little, which can be helpful on the grill where delicate meats are prone to sticking and tearing; I've never confirmed this with side-by-side tests, but if it works, great, and if not, it doesn't undo those first two benefits.

Just be sure to dry the fish well once it comes out of the brine, as wet fish is more likely to stick to the grill.

I set the grill up for two-zone indirect grilling. Mostly, with thinner steaks, you're going to want to sear them over the higher heat portion, but if for some reason they're still too raw in the middle and starting to scorch on the outside, it's good to have a cooler zone to move them to so that they can finish cooking without burning.

I also always clean, oil and preheat the grill grate very well, all of which will help prevent the fish from sticking.

Once the steaks are seared on one side, I flip them over to sear on the other side. If you're going to use a glaze, this would be the time to apply it. The glaze you see here is our own homemade teriyaki sauce.

When the salmon hits between 110°F and 125°F on an instant-read thermometer, it's about medium-rare and ready to serve. 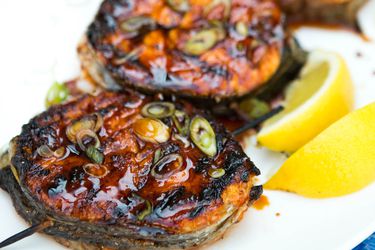 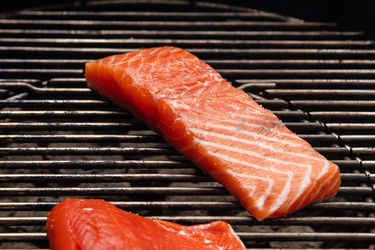 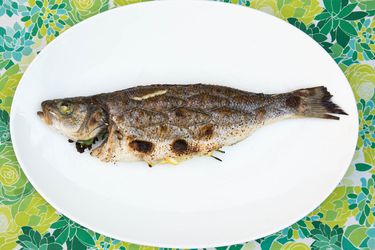 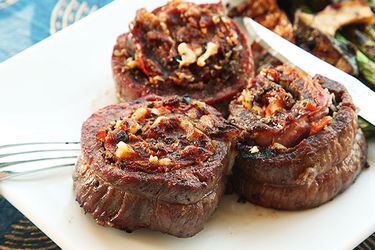 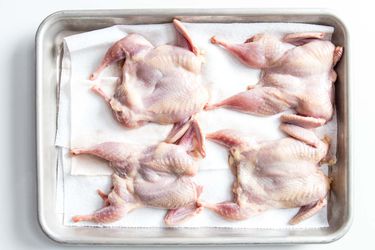 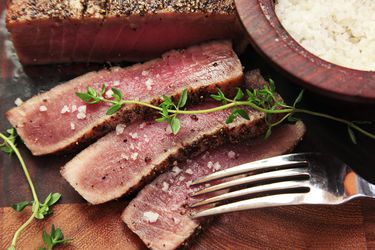 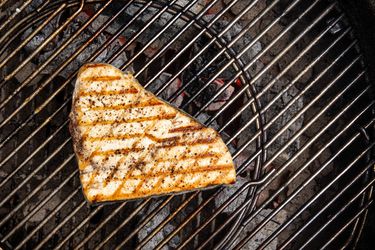