How to Dye Easter Eggs Naturally, Without a Store-Bought Kit

Making natural dyes for Easter eggs is as simple as getting your hands on some beets, red cabbage, turmeric, or onion skins.

Like most people, I grew up on Paas eggs, glowing with chemical dyes and artificial colors. My memories are vivid: the sulphuric smell of boiled eggs, the sharp hit of vinegar in my nostrils, the metal egg holder shaped like an old person's eyeglasses, and the mystical colored-dye tablets. The connection between hard-boiled eggs and the Christian religion is pretty much lost on me, though its symbolism of new life rings true, especially on a beautiful spring day. Anyway, it doesn't matter too much—they're a tradition, and that means enough.

Rather than the store-bought kit, my wife grew up following an Easter tradition of wrapping eggs in onion skins and boiling them in a length of white cloth tied up tight with string. Last year, while living in Estonia, we dyed eggs this way, placing sprigs of dill, bits of rice, and whatever grass or leaves we could find in the yard inside the flaky onion skins. A ten-minute boil and the eggs emerged mottled and charming.

It's a far more creative adventure than a store-bought kit: you actually have a say in how your eggs turn out by using whatever materials you want. The thrill and surprise of unwrapping your hot egg brings out the kid in all of us.

If you decide to go the natural route, though, wrapping the eggs in onion skins isn't the only way to dye them naturally. While experimenting with different foods as coloring, I was pretty impressed with how well a few easy-to-find and inexpensive foods worked.

With a couple of beets, some ground turmeric, and a red cabbage, I was turning out gorgeous eggs in all three primary colors.

So whether you go with the naturally-made dyes (made for dipping eggs just like the chemical stuff) or the onion-skin route, it makes the whole process a lot more interactive and fun. Here's how to set yourself up for a DIY Easter egg year.

How to Make Natural Dyes for Easter Eggs

The idea here is to treat the eggs just like you do in the dyeing kits: boil them ahead of time all at once, then dip each egg in a colorful dye to decorate it.

Red and yellow were obvious: If you've ever cut beets on a wooden cutting board, it's probably still stained red, as is your countertop from the last curry you made with turmeric.

But how many foods do you know that are blue? Strangely, if you boil red cabbage with some water and strain it out, the resulting purplish liquid will stain eggs a rich, cobalt blue. Don't ask me why, but it works.

For red dye: Take 1 to 2 beets (about 3/4 pound) and roughly chop it. Combine it with 1 quart water, 1 tablespoon vinegar, and 1 tablespoon salt in a saucepan. Bring to a boil, then cover and simmer for 30 minutes. Strain, reserving the liquid for dyeing.

For blue dye: Take 1 large red cabbage (about 1 pound) and shred it. Combine in a saucepan with 1 quart water, 1 tablespoon vinegar, and 1 tablespoon salt. Bring to a boil, then cover and simmer 30 minutes. Strain, reserving the liquid for dyeing.

To dye the eggs: Simply soak them in the liquids until they are the desired colors. At first, the colors will be quite pale, though beautiful.

They don't work equally well: the red dye sets very quickly, and the turmeric isn't far behind. But after a minute or two in the blue dye, the egg had hardly changed at all. To achieve a truly rich blue, the egg needs to soak for a few hours.

The eggs do need to dry, otherwise the color can rub off, so set them on a wire cooling rack for about 30 minutes to an hour.

Knowing I had all three primary colors, I did a little experimenting with using two dyes on the same egg: yellow and blue to make green, red and yellow to make orange. It wasn't entirely successful, though I did come up with a nice subtle green and a slightly brownish orange.

Unlike traditional egg-dyeing, these eggs are not pre-boiled before coloring. Rather, the cooking and dyeing process happens all at once.

You'll need the skins of at least 8 to 10 onions for every dozen eggs. (The onions themselves should then be used sooner than later.)

In addition to the onion skins, which will color the eggs nicely by themselves, you can also collect leaves, flower petals, leafy herbs, uncooked rice, etc. to leave impressions against the outside of the eggs.

You'll also need cloth to wrap the eggs with: for a couple dozen eggs, say a yard or two of inexpensive muslin or other white fabric. Cut it into large squares and build your egg on top. To tie the eggs, lightly colored yarn or kitchen twine works well. Make sure to wrap yours up distinctively so that it will be easily recognizable once they all head into the pot.

Boil for 10 to 12 minutes to set the colors and cook the eggs. Then unwrap them and see how they turned out! 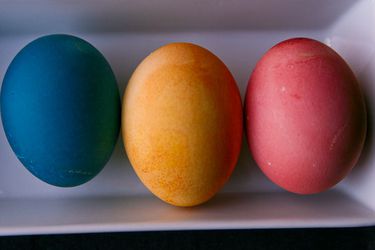 How to Make Perfect Easter Eggs 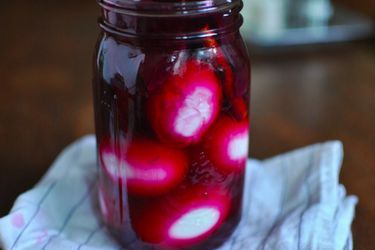