I once had the honor of spending an afternoon cooking omelets with legendary chef André Soltner. It's a task that seems simple but, of course, is not. And for that reason, making an omelet is what chefs would ask prospective employees to cook as an audition. As the well-known refrain goes, everything you need to know about a cook, you can learn by observing them make an omelet.

Interestingly, Soltner's lesson didn't start with the omelet. It started with cracking eggs. I'd been cracking eggs my whole life, but I had no idea just how detailed a person could be about the right way to do it. His method was rooted in extreme resourcefulness: Soltner grew up in wartime France when food was often scarce. An egg, in those years, was beyond precious, a source of nutrition and sustenance like little else. To waste even a drop of it was unthinkable.

He showed me how to crack the egg, split the shell in two, dropping the white and yolk into a bowl, then cradle each half in his fingers, freeing his thumbs to carefully scrape every last bit of white from the shell halves. His method was deft, efficient, and beyond thorough.

Well, that's not what I'm here to show you today. Instead, I'm going to show you the exact opposite. You see, there are times—such as wartime and perhaps a calm weekend morning when you're taking the time to make the most painstaking omelet of your life—when that kind of care is essential. But then there are other times when speed, crude and rough as it may be, is all that matters.

As a guy who used to work the Saturday night dinner shift and return to the restaurant early Sunday morning for a shift that stretched from brunch to dinner (which amounted to at least 15-hours on my feet working non-stop from start-to-finish), I know that sometimes you need to crack a lot of eggs as quickly as possible.

For home cooks, speed-cracking is not something you need to do every day. But sometimes it comes in handy. Let's say you've rented a house on a lake with your friends, a whole big bunch of them plus all the significant others. And you wake up one chilly morning and decide to make scrambled eggs for the crowd. Sure, you could break the eggs one-by-one, semi-carefully, the way most of us normally do. But this is a moment that is crying out for some badassery. This is when you want to stand there in that rented kitchen and bang those motherf-ers out like nobody's business. Your friends will be astonished. They'll also be fed more quickly.

To do it, there's only one thing you need to know: how to crack an egg with one hand.

How to Crack an Egg With One Hand

This is one of those things that's easier shown than described, but I'll try my best. First, a few observations:

Okay, so now that we're ready to get cracking, here's how to do it. You basically have two choices: you can either crack an egg in one hand while the other reaches for the next egg, or you can break two eggs at once with one in each hand, then grab the next two, on and on. I'm a lefty, so if I were doing the first method, I'd single-hand crack with my left hand while my right was grabbing the next egg. But, because I'm a lefty, I'm also accustomed to using my right hand often (damn you, right-handed scissors!), so I'm comfortable taking one egg in each hand, banging them both out at once, and then grabbing the next two. You can do it either way, it really doesn't matter.

Like a competitive hot-dog eater who reaches for the next dog with one hand while stuffing the first down the gullet, this move is all about carefully timed coordination. Pulling this off is like patting your head and rubbing your belly at the same time.

The key is being able to direct your non-dominant hand for the next egg, while you're simultaneously firing off the current one in your main hand. If you were an archer, it'd be like shooting an arrow with one hand while grabbing the next from the quiver. That's a badass move if I ever heard of one. With the cracking and reaching happening at once, as an onomatopoeia, it would go: creach, creach, creach...or maybe, rack, rack, rack...

Okay, but Wait, How Am I Actually Cracking This Egg in One Hand?

Ah, I was hoping you wouldn't ask that. I have a feeling each person may do this in a slightly different way. But I'll tell you how I do it: I cradle the egg in my hand, in a grip that's somewhere between all-fingers and full-on palm. I make sure that I have my pinky and ring fingers gripping the bottom (wider) half of the egg, and my middle, index, and thumb on the top half. Using this grip, there should be one side of the egg still exposed and not covered by your hand or fingers—I whack that exposed part against whatever cracking surface I'm using. Then, holding the base of the egg steady with my pinky and ring finger, I pry the top half open with my other fingers. The egg should drop out into the bowl or China cap below.

Is this making sense? Yes? Great! No? Go grab an egg, I guarantee you that you'll figure it out. Or just look at the photos and gifs we've included here.

For some folks, especially those with one hand that's way more dominant than the other, the One-Handed Crack-and-Reach may be the way to go. For those of us who are more ambidextrous, the Two-Handed Smash-and-Bash can be easier. Why? Because commanding one hand to do one thing while sending brain signals to the other to do something totally different is way trickier than it should be for Earth's most intelligent life form. If you have good control over both hands, it's way less taxing on your brain to have them mirror each other. And that's where the Two-Handed Smash-and-Bash comes in.

Here, you're going to grab one egg in each hand, then simultaneously crack them against your cracking surface. It's freaking gorgeous.

And that's it! Granted, this is not an essential kitchen skill. It may even be forbidden in the pristine galleys of Per Se, Noma, or the Fat Duck. But there's a time and a place for everything. Sometimes you need the precision of a brain surgeon, and sometimes you've got ten guys bleeding out from gunshot wounds and slow-and-steady just ain't gonna cut it.

In those moments, you Crack-and-Reach and Smash-and-Bash your way to some hardcore badass renegade Rambo eggs.*

Legal disclaimer to be speed-red in a lawyerly voice: No matter how fast you crack your eggs, you are still responsible for how you cook them: scrambled eggs should still be softly cooked and moist; omelets should have minimal-to-no browning and be slightly runny on the inside; frittatas should be as tender and delicate as a baby's bottom. 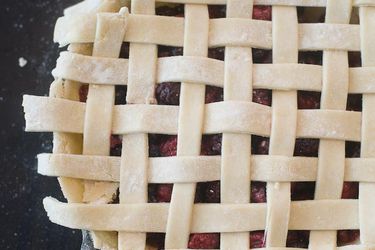