Despite the fact that I keep a mostly vegetarian diet and stay 100% vegan for a full month out of every year, I'm just about the furthest thing you'll find from a health nut. My general philosophy on healthy eating is this: We all know what crap is; don't eat too much of it. My doctor seems to think it's working alright for me thus far. I'm prefacing the article this way because, for better or worse, shirataki noodles—those slick, slippery, yam starch noodles you find next to the tofu at your supermarket—have a reputation as a low-calorie health food. But that's not what this article is about and it's certainly not why I keep a few packages of shirataki in my fridge at all times.

I'd eaten shirataki or similar yam noodles before, but it wasn't until recently that I started noticing pouches of them suspended in water at American supermarkets. Admittedly, my first reaction on seeing them in the refrigerated display case was oh man, another "health" food jumping onto the gluten-free crazy train. But despite garish packaging and large starbursts filled with "Zero Calorie!" and "Gluten-free!" claims, what's inside those bags is pretty much identical to the traditional Japanese preparation. Shirataki (or ito konnyaku) can vary in appearance and texture depending on where you are in Japan, but all are made with glucomannan starch extracted from devil's tongue yams. It's an indigestible dietary fiber that basically passes straight through you, giving you a noodle with zero net calories and zero net carbs.

Does that talk of carbs and dietary fiber and calories make your eyes glaze over? Yeah, I feel the same way. If you eat shirataki noodles as a diet food, more power to you. But the real reason I love them (and perhaps the reason why you should too) is their texture, and that's really all we need to talk about when it comes to shirataki. They are virtually flavorless on their own, which means that they are superb for picking up the flavors of whatever sauce they're in. Texture-wise, they're slippery and slick, sort of like a cross between spaghetti and Chinese green bean jelly and it's this texture that makes them such a joy to eat.

I love cold wheat noodle salads. Dan Dan Noodles are one of my favorite Sichuan dishes, and a quick and easy Spicy Peanut Noodle Salad is one of my go-to simple late night meals. But even I've got to admit that wheat noodles can get frustrating from time to time. Sometimes I just want the flavor of those Sichuan peppercorns, vinegar, and chile oil without feeling sluggish and weighted down after finishing a bowl. Plus, wheat noodles can release starch as they sit in their sauce, turning what was once a light and refreshing sauce into a starchy and stodgy stew.

Shirataki noodles solve both of these problems. Unlike pasta or Chinese noodles, shirataki have no loose surface starch and thus don't stick together or alter a sauce's texture at all. That first bite of noodles you take in the kitchen? The one where you've balanced all of the flavors and textures just right? That's how the last bite is going to taste as well.

If you go to a particularly well-stocked supermarket, you'll find shirataki in a variety of shapes and flavors, some made purely with yam starch, others with added tofu or other proteins and starches intended to give them a specific texture that mimics more traditional noodles. As someone who generally spurns the advances of foods masquerading as other foods, I stick to the traditional variety.

Because shirataki are so mild in flavor and so light in texture, it also means that you can really gorge yourself on a bowl of them, sopping up all that flavorful sauce without feeling like you just at an entire six-pack of hot pockets like you used to be able to in college. With wheat noodles, my body says uncle long before my mouth and my tongue do. With shirataki noodles, they're on relatively even footing.

Then, of course, there's the convenience aspect. Aside from a bit of draining and rinsing, shirataki noodles require no preparation at all. Drain, rinse, dress, and you're ready to eat. It takes longer for me just to heat up a pot of water to cook wheat noodles than it does for me to prepare a cold shirataki noodle salad from start to finish. To make things even easier, I keep a little deli container full of Sichuan peppercorn and dried chile-infused oil in my fridge at all times. All I've got to do is toss them in a bowl with some shirataki along with some vinegar, soy sauce, and a few stray aromatics, and I've got myself a fresh, healthy, flavor-packed snack that eats like a meal in under five minutes. For pure convenience-to-flavor ratio, that's pretty darn tough to beat.

Shirataki are equally delicious and convenient in hot preparations. Have you ever been tempted to cook your fresh ramen noodles (like, say, these awesome ones from Sun Noodles) directly in the pot of hot broth on your stovetop? There are two good reasons not to do this. First, wheat noodles should be cooked in boiling (or at least close to boiling) water in order to set properly and get a nice chewy, bouncy texture. Once seasoned and ready to serve, most ramen broth shouldn't be heated above the barest simmer in order to preserve flavor (and to ensure that it doesn't break or coagulate). Secondly, and more importantly, wheat noodles shed a ton of starch as they cook, severely altering the texture of your broth by turning it thick and gummy.

With shirataki noodles, cooking directly in the hot soup you're going to serve them with is not just possible, it's actually better, infusing more flavor into the noodles and saving you from having to heat up a separate pot of water. Just pour your broth into a saucepan, add your rinsed noodles, and heat everything up together on the stovetop.

I know that some of you aren't going to be convinced here. Slippery is a common texture in many East Asian foods, but not necessarily one that is familiar or comforting to the Western palate. For those of you who can't get past slippery noodles, I'm afraid I can't help you. But for the rest of you who, like me, have been vaguely wary of shirataki noodles and all that they imply, I strongly urge you to put those fears aside just long enough to try a bowl out. This Sichuan-style shirataki noodle and cucumber salad is a pretty good place to start. 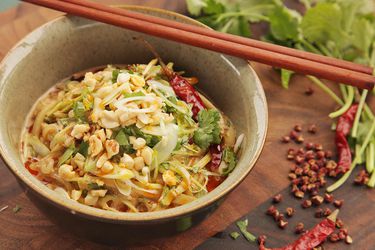 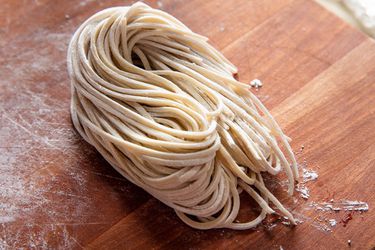