Why does one recipe for ice cream melt fast and loose, while another stays cool and scoopable after resting on the counter for 15 minutes? Why are some ice creams so dense and rich that you almost have to chew them? And why do some ice creams taste full-bodied and almost warm while others are dead-ringers for frozen cream?

The answer, at least a partial one: eggs.

Eggs, specifically egg yolks, play several roles in homemade ice cream. You can make tasty ice cream without them, but there's a reason that almost every recipe published in the last 50 years calls for them. Here's why:

After water, egg yolks are mostly fat and protein. Fat, which freezes differently and less hard than water, makes ice cream soft and creamy. Protein is more valuable as it's cooked—when heated, egg proteins coagulate into a thick gel which, if you could zoom in on them at a microscopic level, would resemble a mesh of fibers. Water gets trapped in this mesh like dryer lint in a lint tray, and when it's trapped and surrounded by protein, it can't form chunky ice crystals. No chunky ice crystals = smooth, creamy ice cream.

That's not all. Egg yolks are also full of emulsifiers, mainly lecithin, which bind fat and water together in a creamy emulsion. In the same way that mayonnaise—an emulsion of oil and acid made with eggs—is thicker and more creamy than any of its constituent ingredients, ice cream made with eggs develops a richer body than ice cream made without. Eggs leverage the fat already present in the ice cream base (the butterfat in cream and milk) and make it work even further for a creamier texture.

But wait, there's more! Egg yolks also improve the stability of an ice cream, reducing its tendency to melt before you can get it from freezer to cone to mouth. This also means that egg yolks prolong the shelf life of ice cream in a freezer, since they inhibit the thaw-re-freeze cycle that ruins ice cream's creamy texture.

So eggs have a lot going on. And on top of all that, they taste good, adding a rich, custardy note that is often desirable in flavors like vanilla. Which brings us to the question at the very top of this article: how many eggs does ice cream need? Some recipes call for as little as two egg yolks per quart of finished ice cream or as many as ten. David Lebovitz, the prophet of homemade ice cream, often uses five. I call for six. Jeni's in Columbus, Ohio, uses none. Instead, her ice cream involves a special pasteurization process, some cream cheese, and a touch of invert sugar to ensure a smooth, ice-free scoop.

"Is there a magic ratio of eggs to dairy that we should use? The short answer: not really."

Is there a magic ratio of eggs to dairy that we should use? The short answer: not really. Depending on what you add to your ice cream base—fruit, alcohol, syrups like honey, or fatty ingredients like chocolate—you might need to adjust your ratio of cream to milk to eggs. But let's look at a basic ice cream base, what's often called sweet cream. It's a simple custard of cream and milk cooked with sugar and eggs, and it can be used as a master recipe for dozens of flavor variations. How much difference do egg yolks make in it?

We made six idential batches of sweet cream base, only changing out the number of egg yolks per batch. Using a standard ratio of two parts heavy cream to one part whole milk (with a little vanilla and salt thrown in for good measure), we made batches using as little as zero or one eggs per pint to as much as five. (Less eggy ice creams were topped off with additional dairy to maintain equal volume and fat level, as the dairy base has a similar fat percentage to egg yolks). The batches were then all cooked together in a 170°F immersion circulator to ensure even cooking, refrigerated overnight, and churned for 45 to 50 minutes each.

The first obvious difference is color: the eggier an ice cream, the more yellow it looks. We know that food color can have a huge impact on the perception of its flavor, so the Serious Eats team tasted the six ice creams literally blind. Eyes closed, they accepted a spoon of ice cream from intrepid intern Sam who scooped from behind a barrier. The tasters tried ice creams in a varied random order and rated them on overall preference, flavor, and texture.

The results are pretty striking (if you have trouble reading the graph, click it to enlarge). The eggier an ice cream, the more tasters liked it and the higher, for the most part, they rated its flavor and texture. The gains in flavor are present but relatively modest; the increase in creamy texture is considerable. How did the ice creams taste? The zero egg batch tasted more or less like the frozen whipped cream it essentially was. It was on the icy side, melted quickly, and felt thin on the tongue. The super-eggy ice cream was essentially frozen custard—dense, chewy, slow to melt, and very creamy. Its flavor had a decided eggnog lilt.*

*It's worth mentioning that you can of course make great ice cream with few to no eggs. Gelato is usually low on eggs, as is some soft serve, and ice creams like Jeni's show that there's more than one way to churn an ice cream. But for most homemade ice cream in the rich, buttery, American sense of the term, eggs are the way to go.

So the more egg yolks, the better the ice cream, right? Well, not entirely. While the aggregate of our tasting panel showed distinct trends, individual tasters had their own preferences. Before our tasting, Leandra announced her clear preference for ice cream so hard and icy you have to chip at it like over-frozen Italian ice, so she was all over the icier ice creams. In the days following the tasting, ad sales director Jim kept coming back for the the two-yolks-per-pint batch, which most people hated. I was most partial to the four-yolks-per-pint batch, which was plenty creamy and not as overtly eggy. Point is: what the statistical average of a tasting panel likes isn't always what you'll like. Ice cream is a very personal thing.

The bigger issue is how to generalize these results. In a sweet cream base, the only flavors going on are eggs, dairy, and maybe vanilla. Eggs boost the flavor of vanilla well, enough to make me rethink my standard vanilla bean ice cream recipe to better suit these results. And they complement others flavors too, enough so that I don't think chocolate or mint ice cream is really complete without them.

"More is creamier, but not always better."

But the eggs have a way of obscuring other ingredients. The downside of rich custard is a loss, to an extent, of pure, clean flavors, and super-creamy ice creams have a way of weighing down the palate. Going for broke with ten egg yolks will ensure a smooth, rich ice cream, but it may also overwhelm more delicate flavors that you've added to your base. In some fruit ice cream, for instance, the more eggs you add, the duller the fruit taste may be. More is creamier, but not always better.

The answer to "how many eggs should I use in my ice cream" ultimately comes down to what feels right for a specific flavor, and how you want that flavor delivered to your palate. Eggier ice creams are richer, creamier, slower to melt, and more custardy and dense-feeling. The more eggs a recipe calls for, the more it'll embody those characteristics, and if you want an ice cream to be any of those things, you can add an egg yolk or two in a recipe without causing any damage. You can also lighten up an ice cream doing just the reverse.

Unlike most baking, ice cream is flexible stuff—it's easy to adjust ingredients to your taste. And once you know how eggs work when making it, you're free to fiddle as far as your cholesterol levels allow.

Special thanks to Kenji and Food Lab intern Luke for all their help putting this taste test together. 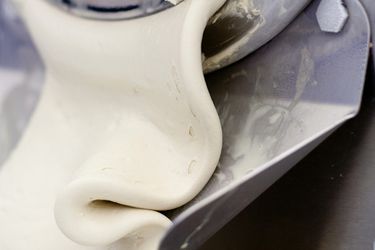 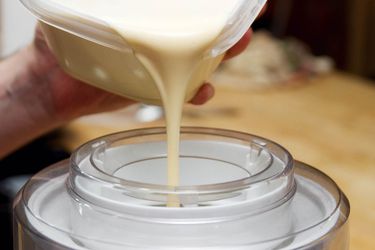