I have always been impressed by how the French and British in my life (both my family and significant other) adopt two items straight from Americana with no questions, reservations, or hesitations: American football, and chicken wings, the last things on Earth, much less in my homeland, I thought either of them would ever subscribe to.

It all started at a Miami Dolphins game to which I reluctantly dragged Mr. English. I turned back to find him on his feet, shouting at the opposite team, telling the Dolphins to get a move on. Later that night, he discovered chicken wings and loaded baked potatoes (a la last year's nachos) and blue cheese dressing. As it turns out, girls, you can change a man. You just need to pick your battles.

For this recipe, I thought I would create an American tradition with my usual French flavors, something to serve to French, Americans, and Brits alike to please everyone at my Super Bowl party.

I love these drummettes—which I prefer to wings—deep-fried and tossed in butter as usual, but with the flavors of sweet, sticky honey and tangy, spicy, sharp Dijon mustard. The whole-grain mustard a l'ancien adds an almost sesame seed-texture. Two bite touchdowns. 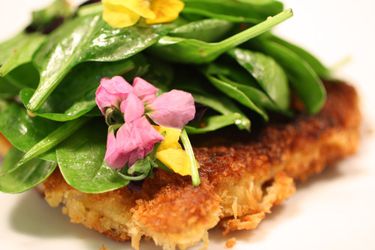 French in a Flash: Dijon Pork Paillard with Spinach and Flower Salad Recipe 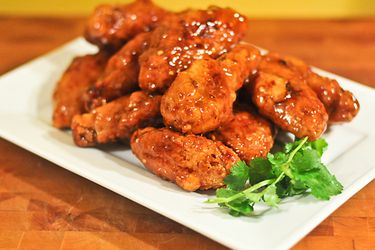