The answer to "Should I make my own pear liqueur?" is YES!

I am obsessed with Champagne cocktails. So when I hit upon a DIY ingredient that pairs well with sparkling wine, it's time for me to buy bubbly by the case. One Thanksgiving, I happened upon a delicious fizzy cocktail made with sparkling wine, fresh pear syrup, and gin, which launched a new sub-obsession—finding ways to combine pears and Champagne.

So far, my favorite is a homemade pear liqueur made with brandy, because you get the sweetness of a fruit liqueur and a little dryness and rich flavor from brandy bundled into one ingredient. During the winter, many of the more showy fruits are out of season, but you can still find decent pears. (You have to love a fruit that goes equally well with stinky cheese and pork chops as it does with Champagne and brandy.)

Though pear liqueur isn't something you'd find in every corner liquor store, places like BevMo tend to stock it. Pear brandy is a liquor distilled from pears, and is sometimes called eau de vie de poire. These are the ones you'll see with the little pear in the bottle, and there's no sugar added. Pear liqueur, on the other hand, is a spirit plus sugar and pear flavoring. The spirit can be brandy or a liquor made from pears. Liqueurs made with a pear eau de vie as the base tend to be brighter and fruitier, while the brandy-based versions have deeper undertones.

Two of the standout liqueurs made with a pear-spirit base are Rothman & Winter's Orchard Pear and Mathilde Pear. Both are lovely and delicate with a strong flavor of fresh pears. Xante and Brillet pear liqueurs are made with a Cognac base. While the pear flavors are strong, the spirit also comes through and makes it about more than just a fruity beverage.

Making your own pear eau de vie is an ambitious task, but making pear liqueur with another spirit as the base hits the "Yes, Make It Yourself!" trifecta: It's easy, cheap, and better-tasting than the store-bought stuff. My favorite is a brandy base, but you could also try it with whiskey or vodka. Pears are a flexible ingredient, so if you wanted to try a different second flavor in place of vanilla, you could go with cinnamon, ginger, orange, or almond instead.

This liqueur is a natural with Champagne—with or without a little lemon. For a stronger Champagne cocktail, you could splash in a little brandy, too. Speaking of bubbles, I like to add this pear liqueur to club soda for a lower-alcohol cocktail refresher. We're also big fans of this pear and tequila cocktail recipe from Gramercy Tavern in NY.

If you're feeling creative, use your homemade pear liqueur in place of triple sec in a Sidecar. Using the Mr. Potato Head method, you could easily swap this in for triple sec in other classics. What other cocktails do you think need a little pear?

You can substitute another spirit for brandy or replace the vanilla with another spice like ginger or a cinnamon stick. Vanilla releases its flavor a lot more quickly than pears do. This is also true of other strong ingredients like ginger and cinnamon. So be sure to taste your liqueur as it infuses to see when you need to remove your secondary flavoring ingredient.

Straining through the coffee filter is recommended because it catches small, hard-to-see bits of pear that, when left in the liqueur, cause it to develop off flavors more quickly. I recommend keeping it no longer than two months. Refrigeration is not needed. 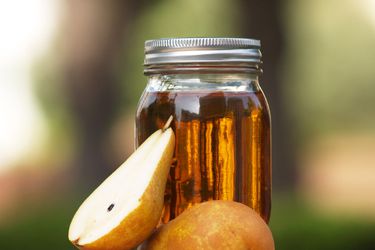