Aromas, both good and bad, tell a lot about how a homebrew was made. Picking out the yeast character in a smell will tell you if the fermentation was healthy or not. Poor sanitation leading to bacterial infection can be detected on the nose. Even the length and vigor of the boil will contribute different aromas to the final product. Being able to identify the different aromas in beer will help you improve your process and fix problems that you find in your homebrew.

Here are a few basic ones to look for when you smell your beer.

During fermentation, yeast produce fruity aroma and flavor compounds called esters. These aromas might remind you of bananas, or strawberries, or even bubble gum. For some styles of beer, a strong, specific ester production is a trademark. The banana aromas from a good German Hefeweizen are completely produced by the yeast, even though some people will insist they blend a Chiquita in every batch. American ales often have a character that may not be attributable to any specific fruit, but is just described as "fruity".

An ester aroma is not considered a negative character by itself. The problem with esters comes when they begin to overpower the rest of the beer. If every homebrew you make smells like strawberry bubblegum or freshly cut pineapple, you will want to start making adjustments to the fermentation part of your brewing process.

Phenols, whose aromas range from pleasant clove-like to unpleasant plastic, also can be produced by yeast. But yeast rarely produce enough phenolic aromas to be overwhelming. If a homebrew has a distinct Band-Aid aroma, it is most likely caused by a bacterial or wild yeast infection. Infections of this nature can be accompanied by an extreme amount of haze in the beer and highly over-carbonated bottles.

Proper sanitation will fix this problem every time. Be sure that every fermentation bucket or carboy is clean before you sanitize it, and don't let anything come in contact with the beer unless it is cleaned and sanitized. Some phenols can also form if there is bleach residue in the fermenting vessel or bottles. Always use Idophor or Star San to sanitize your brewing equipment instead of bleach.

Diacetyl, the same compound that is used to flavor microwave popcorn, is produced by yeast at the beginning of fermentation. There are some British ales where diacetyl is considered to be acceptable at low levels, but in most styles it is undesirable. This compound is made by yeast as they begin fermenting, but it is also reabsorbed by yeast as they finish their job and go into dormancy.

Detecting butter aromas and flavors in homebrew means that the yeast did not have the opportunity to reabsorb the diacetyl they produced. To fix this, allow fermentation to completely finish before transferring to a secondary fermentation vessel or before bottling. If you fermented at a cooler temperature, such as 60°F or below, warm the beer up about 10° F for a day to give the yeast motivation to clean up the undesirable compounds.

There's good news and bad news about this off-aroma. The bad news is that nobody wants to drink a homebrew that smells like creamed corn. The good news is that it's an easy thing fix in future homebrew once you've identified the smell. This aroma originates from a compound called Dimethyl Sulfide, abbreviated DMS. It is found most often in light colored beer, but it can be present in dark beer as well. If you make extract homebrew you probably won't have to worry about DMS, but it is something to be aware of as you move on to grain based recipes.

The compounds in wort that create DMS evaporate very quickly, so this off-aroma can be corrected simply by boiling the wort more vigorously. The lid of your brew kettle should always be left partially off to allow the evaporated compounds to escape. If you leave the lid on tight throughout the boil, the compounds will sink back into the wort as it begins to cool. If you are unable to boil the wort more vigorously due to the limitations of your burner, consider doing a 90 minute boil instead of the usual 60 minute boil.

Smell something strange in your homebrew? Feel free to ask about it in the comments! 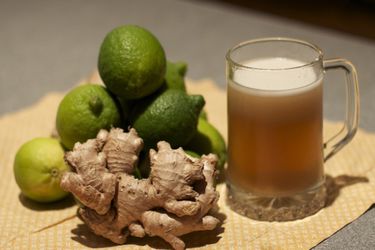