Light, tart, and cloudy, Berliner Weisse is a style that has very few contemporaries in the beer world. It's a sessionable beer—most style guides put it at a maximum 3.8% ABV—with a dry finish and essentially no hop character. Don't be fooled, though, because these light ales pack a real punch in the flavor department. The modern Berliner Weisse is fermented with the souring bacteria Lactobacillus along with a regular ale yeast. Lactobacillus produces a sharp, clean sour flavor that pairs perfectly with the simple malt bill and low hop profile. The refreshing lemony tartness and low alcohol content makes the Berliner Weisse a unique brew.

Berliner Weisse reached the peak of its popularity sometime in the 1800s in Germany, but it has recently fallen out of favor. Today, there are few German breweries who produce the style, and only a couple that distribute the beer to the United States. If you look at a specialty beer shop, you can typically find individual bottles of imported Berliner Weisse made by Gasthaus & Gosebrauerei Bayerischer Bahnhof or Professor Fritz Briem. American breweries have tried to revive the style with varying degrees of success, but don't expect to find a Berliner Weisse with a permanent spot on the tap list at your local brewpub.

These less-popular styles really appeal to me as a homebrewer. If we can't get commercial breweries to make these delicious and historic styles for us, we might as well do it ourselves!

Like most wheat brews of German origin, the malt bill of a Berliner Weisse is simple. Half of the grain should be Pilsner malt and the other half should be wheat malt. Since the alcohol content is so low, the most grain you should be using is about 7 pounds total for a 5 gallon batch. This makes the Berliner Weisse an ideal beer for the brew-in-a-bag method of homebrewing.

Many Berliner Weisse recipes require that you do not boil your wort. It sounds strange, but the rest of the brewing process is pretty normal. You start by making your mash, then you sparge to rinse the sugar off the grain. With the no-boil process, you can drain your wort directly into your fermentor, wait for it to cool down, and then pitch your yeast. This process is a real time saver, but you also run a high risk of having an unwanted infection in your homebrew. That's why, even though the process might seem simple, I recommend that homebrewers have at least 5 or 6 batches of experience before attempting to brew this style of beer.

These "no-boil" methods have a basis in the historical brewing process, but they really seemed to become popular when Stan Hieronymus's book Brewing With Wheat was released. The book includes several historic wheat beer recipes from homebrewer Kristen England, including the no-boil Berliner Weisse.

Whether you're using a mash tun, or if you're using your brewing kettle for a brew-in-a-bag method, mix your hops in with the grain and water. The 150°F mash temperature won't extract a lot of bitter compounds from the hops, but you will still get some of the stabilizing and preservation properties. Since hop flavor won't be noticeable anyway, there's no need to be picky about what hop variety you use. Just use less than an ounce of any low-bittering German hop.

To start fermenting your Berliner Weisse, you'll need a clean-fermenting ale yeast, typically an American ale yeast like Safale US-05. Even though it's a German beer, using a German Wheat Ale yeast would produce flavors that would be out of place, so stay away from those. Since the alcohol content is going to be so low, you do not need to make a yeast starter for this beer. You'll also need a lot of Lactobacillus, which is sold by both White Labs and Wyeast. It's possible to make a starter of Lactobacillus, but making a starter for bacteria is a little more difficult than making a regular yeast starter. I find it's much easier to just buy two packages of Lactobacillus.

"After fermentation is done, wait about two weeks to allow the Lactobacillus to continue its work."

After you cool the wort to the mid-70s, add the yeast and the Lactobacillus. Berliner Weisse should be fermented at a higher temperature than a typical ale, because we're not really worried about off-flavors being produced by the yeast. Instead, the higher temperatures work better for the Lactobacillus, and will help develop the sour flavors. The initial fermentation should be done very quickly, and you may notice that activity stops within a day or two. After fermentation is done, wait about two weeks to allow the Lactobacillus to continue its work. At this point, continue tasting about once a week to determine how the sourness is developing. Your time frame might vary, but after 4 to 6 weeks, the beer should be sufficiently tart and ready for bottling. Traditionally, these beers are bottled at a high level of carbonation.

Here's a Berliner Weisse recipe from Serious Eat's very own Jonathan Moxey. This recipe is modified from Kristen England's no-boil method, and it took first place in the sours category at the Homebrew Alley 6 competition. 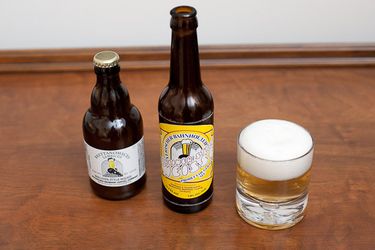 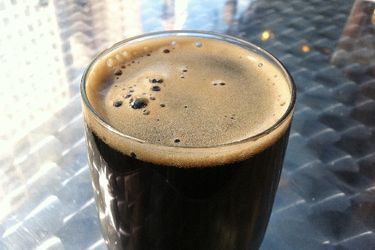 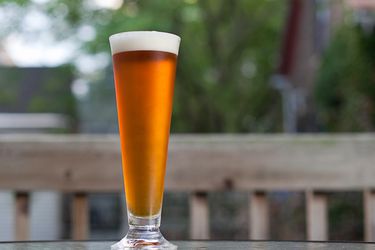 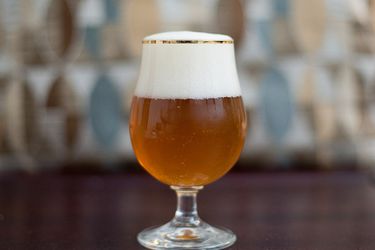 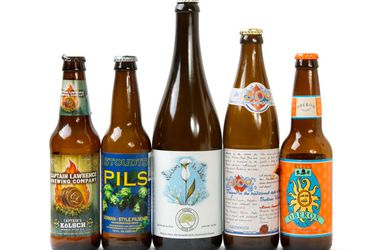