This Pizza from the Past Will Alter Your Pizza Future

I am a huge fan of speculative fiction—especially alternate history and time-travel stories. Why do I mention it? Well, the recipe I'm about to share with you had me thinking about these genres as I kneaded sausage and onion and other stuff into my typical pizza dough over the weekend.

But first, some background...

The D is for Digression: Mama D's Pasta & Pizza

What you're looking at above is the cookbook I stole from my parents' house as I packed off to college. It was already pretty rough looking by the time I got my hands on it, and 12 moves and 20 years since then have taken their toll as well.

Olive oil and tomato stains mar the inside cover and title page, where I scribbled notes and copied out the sauce and dough recipes for one-flip access. Heck, the cover long ago tore off, and I'd just been binder-clipping the thing together.

But I wasn't the first to abuse this book. Here's my mom, jotting notes to herself—probably from as far back as 1982.

Apparently my mom deemed this recipe "good," although I don't remember her ever cooking it when I was a kid. Maybe she wants to now, though, because she asked about this book the last time I talked to her.

Before I mailed it back, though, I leafed through it to make sure I wasn't giving up any gems.

The recipe for Basic Pizza Dough? After learning so much from all you Slice'rs and from Pizzamaking.com, I can't believe I ever followed it. But I don't fault "Mama D" (aka Giovanna D'Agostino), a sweet lady who did a lot of good for her hometown of St. Paul. Her book, Mama D's Pasta & Pizza, is from another era. In 1978, when it was published, it was probably a revelation that you could even make pizza at home—say nothing about hydration, cold-ferments, blended flours, etc.

So, nothing I can't get online.

Pizza within a freakin' pizza?!? Mama D, you have spoken to me from the past with an idea that was almost 20 years ahead of its time. After all, it wasn't until 1994 that Pizza Hut got around to stuffing its crust.

And it's here that I began thinking of alternate timelines and time travel. What if:

I was also thinking of time travel because the Pizza Within a Pizza just doesn't seem that INSANE by today's standards. I mean, when you're baking cheeseburgers and hot dogs into a crust, what's so novel about kneading in sausage, onion, oregano, Parmesan, garlic, and tomato sauce?

If you could go back in time and show the people of 1978 the Cheeseburger Crown Crust pizza, you would BLOW THEIR PRIMITIVE MINDS.

But, guess what? Unlike all that other BS, Mama D's Pizza Within a Pizza is actually kinda good. I think the relative restraint gives it enough wackiness and flavor to make it fun and delicious but not so much that it's a gross-out gutbomb. Anyway, without further ado...

I used Mama D's formula as a jumping-off point. After all, when I posted the recipe on Facebook on Sunday, someone quipped, "You have to love a recipe that calls for garlic powder." I subbed in fresh minced garlic instead.

And instead of mixing all the topping-like ingredients in with the traditional dough ingredients at once, I made a straight dough, let it do a room-temperature bulk rise overnight, and then kneaded in the "Pizza Within" components (above).

The result was kinda ugly. Looks like an asteroid or Pizza the Hut or something. One thing I learned: I should have adjusted for added liquid in the form of tomato sauce. It made my dough very wet. My original dough was about 64% hydration, but I figured the quarter-cup sauce wouldn't bump that up much. In reality, I think it increased the hydration to 74%.

Which is why there's so much bench flour here.

This is my first pizza of the session. I didn't wait long enough after kneading in the "Pizza Within" ingredients and balling it up. Consequently, it was messy and hard to stretch.

I discovered quickly that the additional ingredients make this dough VERY EASY to tear. If you think about it, the chunks of sausage or onion have essentially made holes in the dough as it is. When you try to do a traditional dough-stretch technique, things go south fast.

I ended up pinching together a lot of tears and was gun shy about stretching too far. Which is why this first one is so thick and lumpy looking.

But, hey, not a bad rise in the cross-section shot, right?

In the undercarriage, you can see the onion and the bits where the sausage charred—and all the folds and wrinkling that come from the timid stretch method.

Here's dough No. 2, which had more resting time than dough No. 1. As a result, it was easier to shape.

I ended up simply pressing it out flat on top of probably too much bench flour, but it worked better this time.

By the time I got to my third ball of dough (of four total PWAP doughs), I had gotten the hang of it, using less bench flour and getting a more traditional pizza-like shape and look. Here's a Pizza Within a Pizza topped with a combination of Parmesan, regular mozzarella, and fresh mozzarella:

And here's the cutaway view from this pie once again:

On all my PWIAP pies I laid on the thinnest slick of sauce I could get away with. After all, there's some sauce in the dough. I also took a lighter hand than usual with the cheese on all of these because, you know, there's ALREADY A PIZZA IN THE CRUST.

Except for this bad boy:

It's my signature "Famous Original A" pizza on PWAP crust. I couldn't resist. Though you can't really tell where the PWAP ends and the pizza pizza begins. So it sort of defeats the purpose.

What Worked and What I'd Do Differently

I was actually surprised this crust worked as well as it did. In future attempts I know to press it out without lifting it from the counter.

But perhaps the biggest change I'll make is trying it as a Sicilian-style pan pizza, an idea I got when New Jersey pizza-maker Al Santillo chimed in on my Facebook preview photo:

"I make a focaccia similiar to that. I start with a sicilian dough in a pan. Then I twist the extras in one at a time. Then I wait for it to raise. Then you could top it, if you like."

Actually, the change I'd love to make would be jotting down some of my current pizza knowledge in the Mama D's book, sending it back in time to 19-year-old me, and jumpstarting Past Adam's pizza skills before he'd even started down the pizza path. But that's the stuff of fiction. 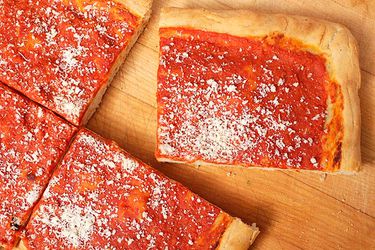