A porridge that's far more than the sum of its parts, with a little assist from spiced brown butter.

I have to be honest with you: I'd heard about harissa before beginning work on this recipe, but I’d never eaten it. My parents talked about growing up with the dish, but we never ate it in our house. But I’ve been making up for lost time since starting developing a version of my own, and I can say without question that harissa is now one of my favorite dishes, Armenian or otherwise. It’s one that I put on par with any of the world’s great cool-weather comfort foods, like chicken noodle soup, cheesy grits, or congee.

Harissa—also known as herisseh, harisa, or keshkeg—is a wheat berry and meat porridge. The meat in question is usually chicken or lamb (occasionally beef), and the wheat is usually korkot, or “shelled” wheat, meaning wheat berries that have had their tough hulls removed, making them (somewhat) quicker to cook. The meat and the wheat berries are combined with water or stock and then cooked and stirred over a low flame for hours until both break down into a uniform, amorphous, stodgy porridge. None of those sound like positive attributes for a main dish, but the process seems to alchemically transform these simple ingredients into a thoroughly satisfying, deeply savory whole. And once you top the harissa with its mandatory Aleppo pepper-spiced browned butter, the dish absolutely sings.

Harissa is traditionally served with sheets of lavash to scoop it up and crisp vinegar-pickled vegetables. While combining a wheaty porridge with bread may sound like starch-on-starch overload, the harissa is so savory that the lavash actually serves as a mild-mannered foil for it. And the pickles help to cleanse the palate between bites. (If you have neither lavash nor pickles, harissa is equally nice eaten with a spoon or a fork, alongside a brightly-dressed green salad.)

Harissa is a dish of special cultural significance to Armenians, many of whom consider it their national dish. And while it is eaten year-round, particularly during colder months, it's also traditionally served at Easter to mark the end of Lent (there’s a vegetarian version of harissa made with wheat and chickpeas or herbs that's eaten during Lent), and as a celebratory feast, such as for the birth of a first child. And it's served to commemorate the Musa Ler resistance during the Armenian Genocide in 1915. While Armenians insist the dish originated in the Armenian Highlands, versions of it are eaten throughout Southwest Asia and India as well; in Arabic it is known as harees, and it's a staple of Ramadan meals.

Harissa is significant in at least one other way: It's one of the only Middle Eastern dishes to make its way into American jazz history, featured in the lyrics and title of scat singer Slim Gaillard’s hit 1946 song Yep Roc Heresay. Gaillard apparently took the words for his song straight from the menu of a Detroit Armenian restaurant. (“Yaprak” is Turkish for stuffed grape leaves.) The song so perplexed some conservative listeners that it was deemed “degenerate” and promptly banned from several radio stations.

Years of restaurant and test kitchen cooking drilled into me the idea that you have to be precise about time and temperature to prepare meat properly, lest it end up overcooked. With harissa, you deliberately cook the meat long past the point of overcooked. I had a hard time wrapping my head around this idea when I first tried it, but once I tasted my first batch, I understood: The point is to break the meat down to its essential elements, transmuting it into pure flavor.

The good news is that once you let go of your resistance to cooking meat this long, the process, aside from the occasional stir to avoid sticking, is practically effortless. (And it’s even more effortless if you use a pressure cooker.) As for what kind of meat to use, I have made it with both boneless chicken thighs and lamb stew meat, and both are delicious. The chicken version is definitely milder-mannered than the lamb, and is the one Armenians seem to make most often, based on the number of chicken harissa recipes I found in my research. This recipe has been tested with both chicken thighs and chunks of lamb stew meat.

Many traditional chicken harissa recipes begin by poaching an entire chicken to make stock, then instruct you to remove the meat from the bones and use both to make the harissa. I chose to skip this step, and I call for using boneless thighs (untrimmed of the bits and bobs of fat which add extra richness here) and pre-made stock. The result is chickeny enough without going to the extra trouble of starting with a whole chicken.

I mentioned above that harissa is usually made with korkot, or “shelled” wheat. This grain is hard to come by outside of Armenian/Middle Eastern grocery stores or online, but there's a very good, easily-available alternative: pearled farro. Farro is a relative of wheat and has a similar flavor to korkot, so there's no shame in using it here. And if you cannot find pearled farro, pearled barley also makes an excellent backup option. That said, if you can source korkot, you should definitely use it. (Farro has red-hued hulls, while those on korkot are white, so the harissa has a slightly different appearance depending on which one you use.)

To Stir or Not to Stir

How often to stir harissa is a subject of much debate. Some recipes suggest it must be stirred often, throughout the cooking process, while others insist you mustn’t touch it until late in the process. I’m not sure what either of these prescriptions are meant to avoid or encourage, but in my experience you needn't worry too much until about the halfway mark, when the starches released by the wheat start threatening to stick to the bottom of the pot.

You do need to stir the harissa at the end of the process, in order to produce the proper tightly-bound and uniform consistency, but I found that the best tool in that moment was not a spatula but a potato masher, which helps release the wheat starch and reduces the pieces of meat to a fine consistency. (You can take this a step further and use a potato masher and an immersion blender, if you have one.) The texture you are looking for is a thick, oatmeal-like consistency that just barely stands on its own. (Don’t worry if yours seems a little loose at first, it will thicken up further as it sits.)

Harissa has a ton of character for a dish with just five ingredients (two of which are just water and salt), but it's made even better with a final, simple flourish. Many recipes just have you form a well in the center of the porridge and tell you to place a pat of butter in it to melt. But I’m partial to those that first brown the butter on the stovetop and add to it a spoonful of Aleppo pepper. To stretch the topping so that there’s enough to go around without using an excess of butter, I add a few tablespoons of olive oil, and this has the benefit of adding some floral notes to the fat mixture.

Don't trim the fat or sinew from the meat; it contributes to the flavor and richness of the porridge, and breaks down completely by the end of cooking.

If you can find korkot, or hulled wheat (available at Middle Eastern markets or online), by all means use that. Pearled farro makes an excellent substitute. If pearled farro is unavailable, pearled barley works nicely here, too.

Because of the minimal evaporation that takes place in a pressure cooker, only add 1 cup water (rather than 2 cups called for in the stovetop version).

When cooking on the stovetop, stir the harissa more frequently after the first hour, to prevent sticking and scorching.

Aleppo chile peppers, which have been cultivated in Syria for centuries, are quite mild in terms of heat, with a hint of raisin-y, sun-dried tomato sweetness. Due to the ongoing civil war, true Aleppo pepper from Syria is no longer available for import, but chiles grown in neighboring Turkey are. You can find Aleppo pepper at Middle Eastern markets, or online. Korean gochugaru or paprika (plus 1/8 teaspoon cayenne to add heat to the latter) can be substituted for Aleppo pepper in this recipe.

Harissa can be cooled to room temperature and refrigerated for up to three days before reheating on the stovetop; add water, 1 tablespoon at a time, to restore it to its original consistency. 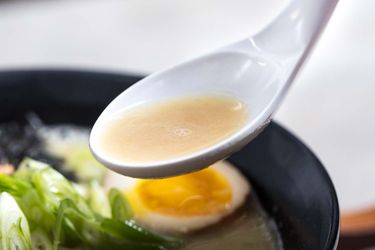