Many of the best known cheeses in the world—Cheddar, Parmigiano Reggiano, "Swiss" (aka Emmenthaler) are firm to hard in texture. But their flavors can be radically different. So how do hard cheeses wind up this way—different from the limpid Bries, but also from one another?

Unlike most of the cheeses in the 101 groups discussed thus far, such as bloomy rinded Brie or washed rind Taleggio, the curds for hard cheeses are processed in a variety of ways to expel even more moisture.

That includes cutting a large mass of curd into smaller ones, which causes liquid whey to leak out; heating the curd, which makes the cheese contract and expel its whey; pressing the curd into wheels or blocks; or salting the curd with salt crystals or a brine, which uses osmotic pressure to draw moisture out of the cheese.

The steps, used in select combinations, yield a young cheese that is better designed for aging. Different methods, when paired with carefully selected bacteria added to the milk and particular aging processes, all determine the flavor and texture a finished cheese will have some six, 12, or 24 months later.

Let's talk Cheddar. Mass market cheddar is typically produced in a block of ten to hundreds of pounds and sealed in cryovac wrapping immediately after production. It then ages (sometimes for years) in a giant fridge. Most of us know it by the delineators "mild," "medium" or "sharp," which are determined by the cheese's final acidity.

Most mass market cheddar isn't actually "cheddared," the cheesemaking technique from which cheddar took its name. Cheddaring is the labor intensive process that involves milling large blocks of curd, forming the ground curd into slabs, and carefully stacking and unstacking the slabs to press out whey.

Traditional English cheddar (and now some American artisan clothbound wheels) is produced not in blocks, but rather in tall wheels that are wrapped in cloth and aged in open-air caves for six to ten months. The resulting cheese is drier and more crumbly, and boasts complex flavor that needn't depend on acid for personality. Celery, toasted nut, and caramel flavors are common in these cheeses.

There are several notably complex and delicious cheddars worth seeking out, including Collier's Welsh Cheddar, Milton Creamery Prairie Breeze (Iowa), and Barber's 1833 Vintage Reserve Cheddar (England). For Clothbound, the earthen UK king is Mongomery's and the queen is Quicke's. For American-made, Cabot Clothbound is the more toffee-flavored go-to.

Cheddar's chunky break-apart texture is in large part thanks to the way it's milled and salted before being formed into wheels or blocks of cheese. That's why it has such a different texture from the more pliable "Swiss"-type cheeses, such as Emmenthaler (the one with the big holes), Gruyere, and French Comte and Beaufort.

These cheeses originated in mountainous regions with a short grass season, which in turn meant a short milk season, so cheese became a way to store as much milk as possible. And since salt was rare in the region—and difficult to transport over mountains—the cheesemaking process relied on heat and pressure to remove moisture.

Cheese geeks know these cheeses as the cooked-pressed cheeses. Their curds are cut into rice-sized grains and heated in a high-temperature vat to expel whey. The cheeses are then pressed under extreme pressure, and there's only a little salt, sometimes just in a salt brine that's washed on the finished wheel.

The resulting cheeses are smooth and dense, with flavors akin to cooked milk—brown buttery notes and roasted or toasted characteristics are common. The frequency of salt water washings also contribute exterior bacterial growth and funky, pungent flavors known in the washed rind family.

As a cheese eater—not a maker—I consider Parmigiano Reggiano and its brethren as something of a hybrid between Cheddar and Alpine cheese. Its curds are cut into tiny bits and heated to extremely high temperatures in vats (like Swiss-y types), but the formed wheels aren't pressed, and are left to bob in salt water baths for several weeks to draw out remaining moisture.

While Parmesan has cooked milk and nutty flavors, it's also quite acidic, often mouthwateringly so, and salt is a prominent contributor to flavor. Tropical fruit flavors like pineapple are also common. The cheeses are aged for one to two years—the longer, the drier and more crumbly—hence their utility as grating cheeses, where a small sprinkle is powerful enough to season an entire dish.

Each of these cheeses is meant for aging and long-term storage, so they're the most durable in a home fridge, often keeping for two to three weeks wrapped in cheese paper or plastic wrap. Small specks of surface mold may develop (blue or green typically), but they're harmless—easily scraped off with no ill effect to the cheese underneath.

You may notice, especially in Swiss and Parm types aged over one year, white specks or crystallized patches. These are amino acid clusters, not mold, and add a pleasant crunch and savory bite to the cheeses' texture. 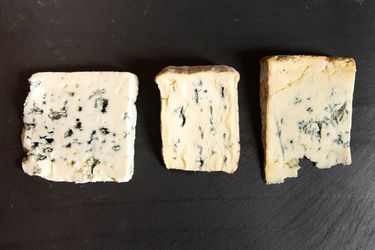 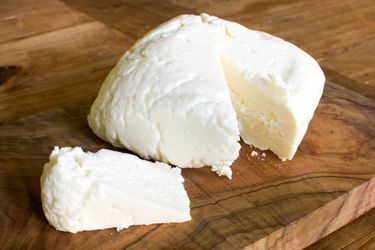 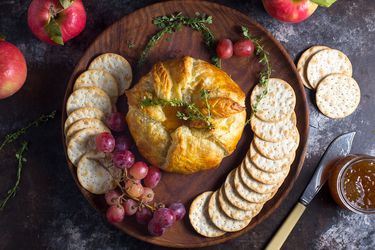