I gotta admit it: when I was in Austin a few months ago, I simply could not wrap my head (or tortilla, for that matter) around the fuss surrounding breakfast tacos, and it wasn't for lack of trying. I hit Juan in a Million, Tacodeli, Tamale House, Taco X-Press, and a handful of others before I turned to my wife and said to her, "have you liked any of these?" Warmed-over buffet line flavor in most of them and overcooked eggs in all of them simply don't make for a satisfying bite on any level, no matter how awesomely flavorful and flaky the flour tortillas or fresh the salsa.

I don't know, maybe it's just something you have to grow up with.

At least, that's what I thought until I tried the Migas at Torchy's Tacos, soon followed by their Wrangler, with tender scrambled eggs, crisp potatoes, and smoked brisket in a fresh flour tortilla.

And we didn't stop there. As soon as that "ok, I get it" light switch flicked on, we went all out, plowing our way through both the breakfast menu (chorizo, egg, and cheese tacos, yum!) and most of the lunch menu before finally slowing to a halt, sipping our horchata, listlessly making tortilla sharks in the remnants of their of oozily delicious queso dip, basking in the post-tortilla glow of a few lunch dollars well-spent.

There's nothing on the menu at the several branches of Torchy's that wouldn't send a hangover back to the depths from whence it came, but might I make a few suggestions?

We've already told you about The Dirty Sanchez, with its fried poblano, scrambled eggs, and guacamole, but the Independent is another strong contender for best-in-show: a slab of deep-fried breaded portobello mushroom perched not-so-daintily on a pile of fresh corn kernels, piled with pickled carrots, avocado, queso fresco, and a squirt of ancho chili aioli. Did I say "perched not-so-daintily"? What I meant was "slammed raunchily".

Or if you crave meat in the morning, the Trailer Park is the way to go. Fried chicken, green chilies, a poblano pepper sauce, pico de gallo, shredded cheese, and a handful of shredded iceberg lettuce in a flour tortilla. What's that iceberg doing in there, you ask? Good question. Just say the words "extra dirty please," and that iceberg will be magically replaced with a ladleful of their excellent cheese sauce.

My favorite dish on the menu wasn't a taco, but Torchy's fresh-and-tasty version of esquites; Sweet corn kernels dressed with mayonnaise, lime juice, cilantro, queso fresco, and ancho chili powder. (Which, for the record, are far better than the frankly overrated version from Fuel City). Prices vary by location, but all dishes are in the $2 to $4 range. 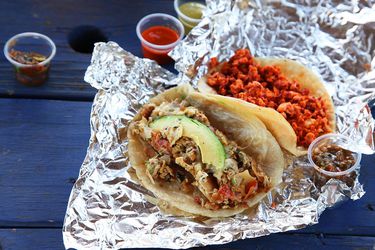 How I Learned to Like Breakfast Tacos at Veracruz All Natural in Austin, TX