You know those white plastic vampire teeth you can buy at the 99¢ store when Halloween season rolls around? Like these guys? Well, I've always been of the opinion that they suck (yes, pun intended)—not only are they totally unconvincing and guaranteed to fit terribly, you can't even eat them. Aspiring vampires have it rough.

This recipe doesn't really solve the "convincing" part of the equation, but at least now you can have your vampire mouth and eat it, too. As best I can tell, the original idea comes from Nestlé's 2010 Spooktacular Baking Contest finalist Lori Fillmore. Her recipe calls for Nestlé Toll House cookie dough lips, red-dyed vanilla frosting gums, and mini marshmallow teeth, with almond fangs. It's a great idea, and her version looks spectacularly kitschy, fun, and totally kid-friendly.

The only problem? There are very few situations in which I like marshmallows, and the combination of chocolate chip cookies and vanilla frosting just wasn't doing it for me. In fact, the only way I do love marshmallows is in s'mores of all stripes, so I took that basic concept and ran with it.

My first challenge was the graham cracker, since boxed versions almost always come in square or rectangular sheets. I thought about making round graham crackers from scratch, but I couldn't think of how to incorporate the requisite chocolate flavor into the final sandwich—a dark chocolate frosting is pretty much impossible to dye red. Instead, I merged the two flavors in the form of a chocolate graham cracker cookie. And hey, good news! The recipe already exists on the site.

From there, I rolled out the dough and cut my cookies into four-inch rounds. Anything smaller, and you can't really fit a convincing number of marshmallow teeth onto the cookie, though you're welcome to try (I certainly did). Once they were baked, I simply sliced them in half to form the upper and lower parts of the mouth.

Next came the gums. In an attempt to retain some level of s'more integrity, I tried out a white chocolate frosting, but it made everything waaaaaay too sweet. What the sandwich needed was something to cut through all that sweetness instead of amplifying it. In traditional s'mores, dark chocolate offers a rich, earthy-fruity-bitter counterpoint. Since replicating that wasn't really an option, I went in the opposite direction and whipped up a simple, tangy cream cheese frosting. It does a pretty decent job of lightening things up and giving your palate a little respite from all that sugar. Is it traditionally s'more-like? Nope, not really. But it tastes a whole lot better. Think even that sounds too sweet? Regular whipped cream cheese would totally work, too.

A word of warning: You'll need to use a lot more food coloring than you think. At a certain point, I just stopped counting and kept on adding drops until the frosting took on a bright reddish-pink hue.

From there, it's just a matter of assembly. Give each cookie half a good, thick smear of icing—about one tablespoon per side—evening it out with an offset spatula or butter knife.

Add your marshmallows to one half, starting at the center (you don't want a lopsided mouth!) and working outwards along the perimeter.

Top the marshmallow half with your other frosting-laden cookie...

...and pop in those fangs! I used slivered almond slices, which stick easily because of their light weight, but blanched and peeled whole almonds would work, too.

Et voilà! Vampire mouth s'more complete. Now I'm just waiting on the brave soul who decides to torch this baby up for a full vampfire* experience!

There aren't a whole lot of ways to combine "vampire" and "campfire," okay? 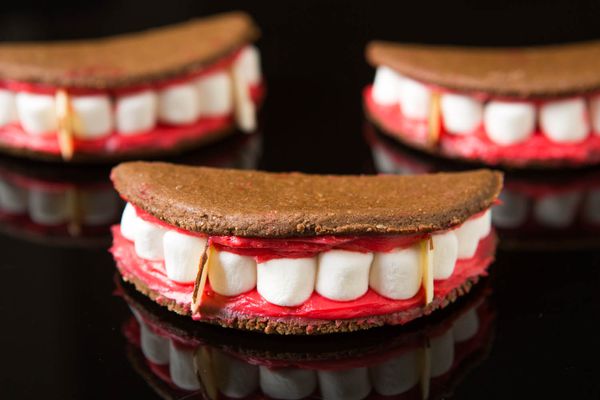 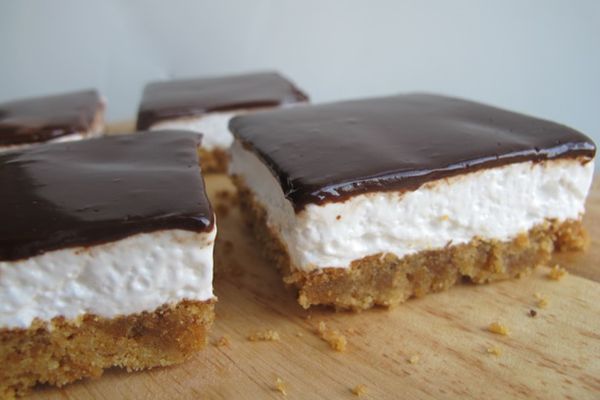 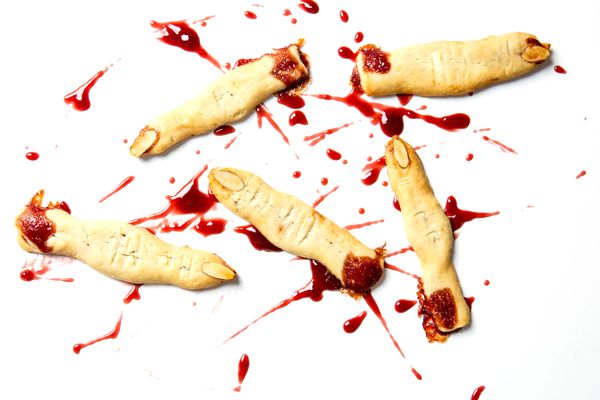 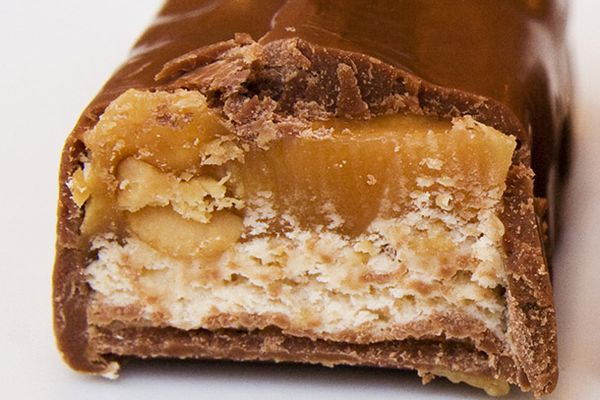 How to Pair Spirits and Halloween Candy 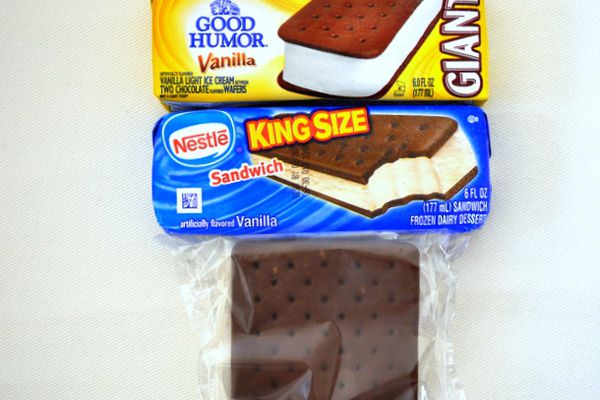