When it comes to Halloween, I'm often the Grinch. No, I don't mean I dress up as the Grinch; I mean it's my least favorite holiday.

There are a few reasons. First, because I grew up in New York City in an era when Halloween meant running home from school as quickly as possible to avoid being pelted by eggs filled with Nair hair remover (trick-or-treating, as you can imagine, wasn't much fun). Second, because I've already gotten a lifetime's worth of costume-wearing out of my system: I was an incredibly bizarre child who dressed up in a new homemade outfit every day for kindergarten,* and later spent years parading around on stage as an extra in countless operas at the Met—once you've worn an elaborate traje de luces as a toreador in Carmen, all other costumes pale by comparison. And finally, because most Halloween food just straight-up sucks.

For all its kitschy fun, Halloween food tends to be stuff I wouldn't want to eat any other day of the year, so I see no reason to eat it on Halloween either. Which is why, when I volunteered to come up with a Halloween recipe for Serious Eats, I told myself it would have to be something I'd want to cook and eat year-round.

As my deadline approached, I started to get nervous, because I had absolutely no idea what I was going to make. In theory it sounds easy: Make something that captures the spirit of Halloween, but is also really, deeply, crave-ably delicious. No cheap tricks or food coloring allowed.

And then, on the morning that the recipe had to be photographed—moments before I was about to give up and call the whole thing off—it came to me like a bad dream. Black broth. Black noodles. Black sheets of nori. Black garlic oil. Black everything. A bowl of midnight ramen.

I grabbed the jar of squid ink that had made itself too comfortable in my fridge and set out shopping. As I walked through the market, the idea continued to evolve. No, not black everything...I need some color. I need orange. And I need egg. There's going to be squid ink in this, so it's clearly a seafood ramen. I know: salmon roe!

I headed to the fish counter for the roe, and my eyes landed on a bag of jet-black mussels. Boom! And then I saw glistening bodies of squid a few feet over. Squid has the potential to look creepy, and given the squid ink in this, the ramen practically demanded it!

And then, why not some green, a mossy bank in a forbidden swamp? Micro greens went into the cart (but you can really use any leafy green, or even thinly sliced scallions).

At the office, I asked Niki to lend me her crafty skills by cutting a sheet of nori into a bat, its fangs dripping with rabid saliva. The broth itself was dead easy: basic chicken stock, rich with the gelatin of bones (either naturally extracted during the stock-making process or added in the form of unflavored gelatin), and some miso.

Shortly before serving, I added the mussels—two pounds of aquatic souls perishing in the heat. And then just enough jet-black squid ink to make children cry for their milk.

As for the noodles, I got some store-bought squid-ink spaghetti and boiled it using the baking soda trick that gives regular pasta the flavor and texture of ramen noodles.

I cut the squid bodies into thin strips and seared them in an infernally hot skillet to make them look like slithery worms, then cooked some cremini mushrooms in the same pan for another quick topping, their earthy flavor suggesting the smell of a freshly dug grave. BWAHAHAHAAAAA! (Maybe I can get into this Halloween thing after all...)

When you eat it, the blackness will surge through your veins and darken your heart. That, or it will make you really happy and you'll decide to make it again next week, when it's not Halloween at all. 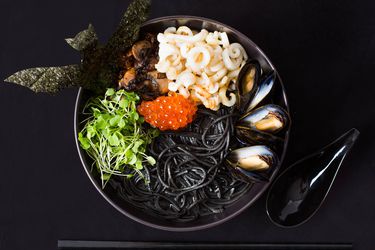 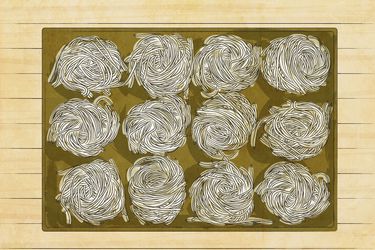 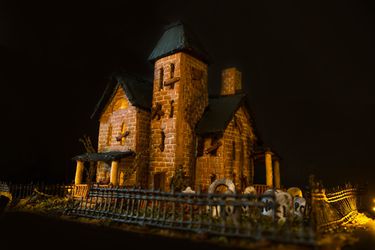 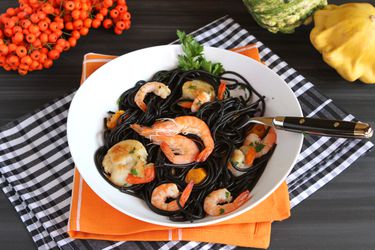 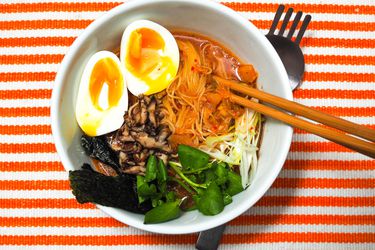 The Quick and Easy Way to Make Flavor-Packed Korean Ramen