Often called simply "Hakka stir-fry" (or ke jia xiao chao) in Taiwan, where it is popular, this dish is exemplary of Hakka cuisine. The Hakka people have significant cultural influence on the island, and their food is no exception: salty, rich, and often employing cured and preserved ingredients, it is quite irresistible. You won't be left wanting for flavor after indulging in this stir-fry with rice.

Who are the Hakka? The people in this distinct group are believed to have originated in central China, but they have dispersed throughout the country—and the rest of the world—in different waves of migrations over thousands of years. They have their own language and customs and were historically regarded as a minority in China. Their Mandarin name translates to "guest families"; in Taiwan, where an estimated 15 to 20 percent can trace Hakka roots, a modern-day term for the Hakka that I've seen is "the Jews of Asia." The Hakka have a reputation for being exceptionally hard-working, stemming from their roots in agricultural communities that had been forced to less-fertile lands far from the coasts. Hence, their food tends to make use of tough offal cuts of meat and sodium to both replenish farmers and preserve foods; there is little use of seafood, unless it is dried or cured.

In true Hakka fashion, this dish would be made with thin strips of dried-then-reconstituted squid. Dried squid is about as easy to find in an Asian grocery as dried baby shrimp, but I've yet to come across this ingredient in conventional groceries in the States. The dish also traditionally uses thin strips of streaky, fatty pork belly rather than lean pork meat. This is cooked first by boiling, to render it more tender, before slicing and stir-frying in the pan. (Indeed, it's the same technique behind the Sichuan dish of double-cooked pork belly.) To counter the pork's heaviness, the pork is fried along with common, thinly sliced vegetables like celery and carrot. Chinese celery, with its narrow stalks and intense flavor, would typically be used, but regular celery can be sliced thinly on a bias instead.

To make this dish, I tried one version using dried squid from the Asian market and compared it to one with slivers of fresh squid. In the end, I must say that preserved foods have some magic. Like dried-then-reconstituted shiitake mushrooms, this dried squid was just so much more umami than its fresh forebear. But the version with fresh squid was good in its own way: tender and bouncy, with a lighter taste. This stir-fry is all about variety, so in either case, the squid plays a major role in mixing it up.

Some iterations of Hakka stir-fry also incorporate strips of boiled pork intestine; toss some in if that tickles your fancy. In Taiwan it's not uncommon to also slice a small chili or two along with the julienned vegetables for a touch of heat. The dish might be Hakka in origin, but it's been widely adopted throughout Taiwan's populations. Sort of like how New Yorkers have their bagels with lox, no matter what their heritage is. 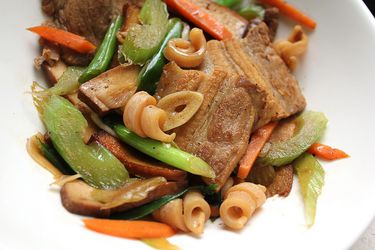