We were passing through the Poconos on our way back to New York City when hunger set in. I'm not sure how else I would have come across the Pioneer Diner in Mount Pocono, PA, but after a parade of Cracker Barrels and gas station mini marts, it stood out like a vein of gold.

Pioneer looks like it could be anywhere, but its Greek menu touting homemade moussaka and spinach pie makes it a dead ringer for my beloved Greek coffee shops in New York. Except it offered a dish I'd never seen on any diner menu ever before: a "Greek omelet" made with gyro meat and feta. I took a stab in the dark and ordered it. What arrived is the plate you see above, with an abundance of rye toast and hash browns that almost honored my request of "burnt."

The omelet was exquisite.

The eggs? Oh they were fine, a hair too browned as they cooked next to my hash browns, but nestled among them were clouds of fatty oregano-spiced lamb, so light they barely gave resistance to my fork. Pockets of feta had turned half molten, their creaminess and twang an over-the-top rejoinder to all that meat. As a meal, with a luxe pile of potatoes and three slices of well-buttered toast, it was almost too much, the kind of absurdly rich fare better gobbled by Guy Fieri than eaten by normal adults. But a diner without at least one heart-stopper on the menu just isn't trying hard enough.

Now let's be clear about our terms. In Greece, "gyro" (pronounced yee-roh) refers to thin slices of marinated pork, stacked and roasted on a spit, and shaved into a sandwich. But this is America, and most of our "gyro" (jeye-roh or jee-roh) meat comes not from Greek homestyle cooks, but rather a few major manufacturers like Kronos in Chicago, who churn out logs of beef and lamb minced into a paste and seasoned with oregano and onion.

"Gyro meat makes a great sandwich, but after my visit to Pioneer, I'm convinced its ultimate destiny is to be cooked with eggs. Every diner should be serving this omelet."

You can, if you so choose, buy this loaf yourself, and at under $4 a pound (albeit in a 20-pound loaf), it's a pretty good deal. (You could also make one from scratch!) But gyro meat sees its highest purpose as diner fodder. Gyro meat makes a great sandwich, but after my visit to Pioneer, I'm convinced its ultimate destiny is to be cooked with eggs. Every diner should be serving this omelet.

So why don't they? SE readers report (see comments below) regular sightings of gyro omelets across parts of the East Coast and Midwest, but the phenomenon is far from universal. George Korovesis isn't sure why. He's the son of Constantine Korovesis, Pioneer's current owner, and the creator of the gyro-feta omelet at Pioneer. Though it's changed hands over the years, Pioneer has been owned by Greeks for four decades. Seven or eight years ago, George was working on the diner's breakfast menu, and he decided to put into an action an idea he'd been toying with for a while.

"I've joked about putting gyro meat in my scrambled eggs for a long time, so I decided to put it on the menu as an omelet. And people like feta, so I added some feta in." George's gyro meat comes in fat strips, which his cooks chop into rectangles and heat up on the griddle. The meat then joins the omelet along with a generous amount of feta. Though many diners in the area make omelets with feta, none have picked up on the gyro trick.

The same is mostly true here in New York City, where if you ask for a "Greek omelet" you'll almost always get some combination of spinach or tomatoes and feta. (Except at Chinatown's Cup & Saucer, where you can indeed find a "Greek" omelet on the menu made with gyro meat, feta, and tomato.) But diners are nothing if not by-request businesses, and if your local stocks gyro meat but doesn't offer a gyro omelet, chances are they'll make one for you if you ask.

We did just that, contacting 11 diners across four boroughs, and all but two responses ranged from "of course" to "sure...we can do that" to "you want to place an order?" One of the two objectors didn't carry gyro meat. Another, a decidedly Greek diner in a thoroughly Greek neighborhood, just wasn't into that sort of thing.

I took one diner up on their offer: Joe Junior in Gramercy (home of excellent burgers and egg creams), where my seat at the counter gave me a view of a cook chopping up some gyro meat, warming it in the deep fryer, and adding it to my eggs.

The omelet wasn't quite as revelatory as Pioneer's, but it still rocked my world, and it resolved a hunger I never knew I always felt. I suspect this is only the beginning for a whole world of lamb and eggs. And it all makes me wonder what else gyro meat has to offer us. Which is why I'm calling it now: gyro meat is the new Spam. 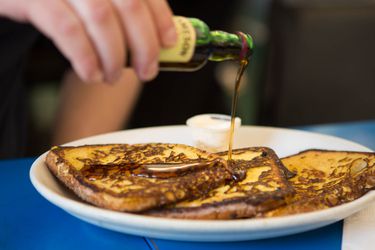 Confessions of a Maple Syrup Smuggler